Our latest anthology Black Sci-Fi combines thrilling new and recent stories with early speculative and proto-science fiction by Black writers of an older tradition. With a foreword by Alex Award-winning novelist Temi Oh and an introduction by Sandra M. Grayson, alongside invaluable promotion and editorial support from Tia Ross and the Black Writers Collective, this is an anthology we’ve been especially excited to share! In celebration of the book’s hotly anticipated release in the US, authors from the collection reveal the inspiration behind their stories below. 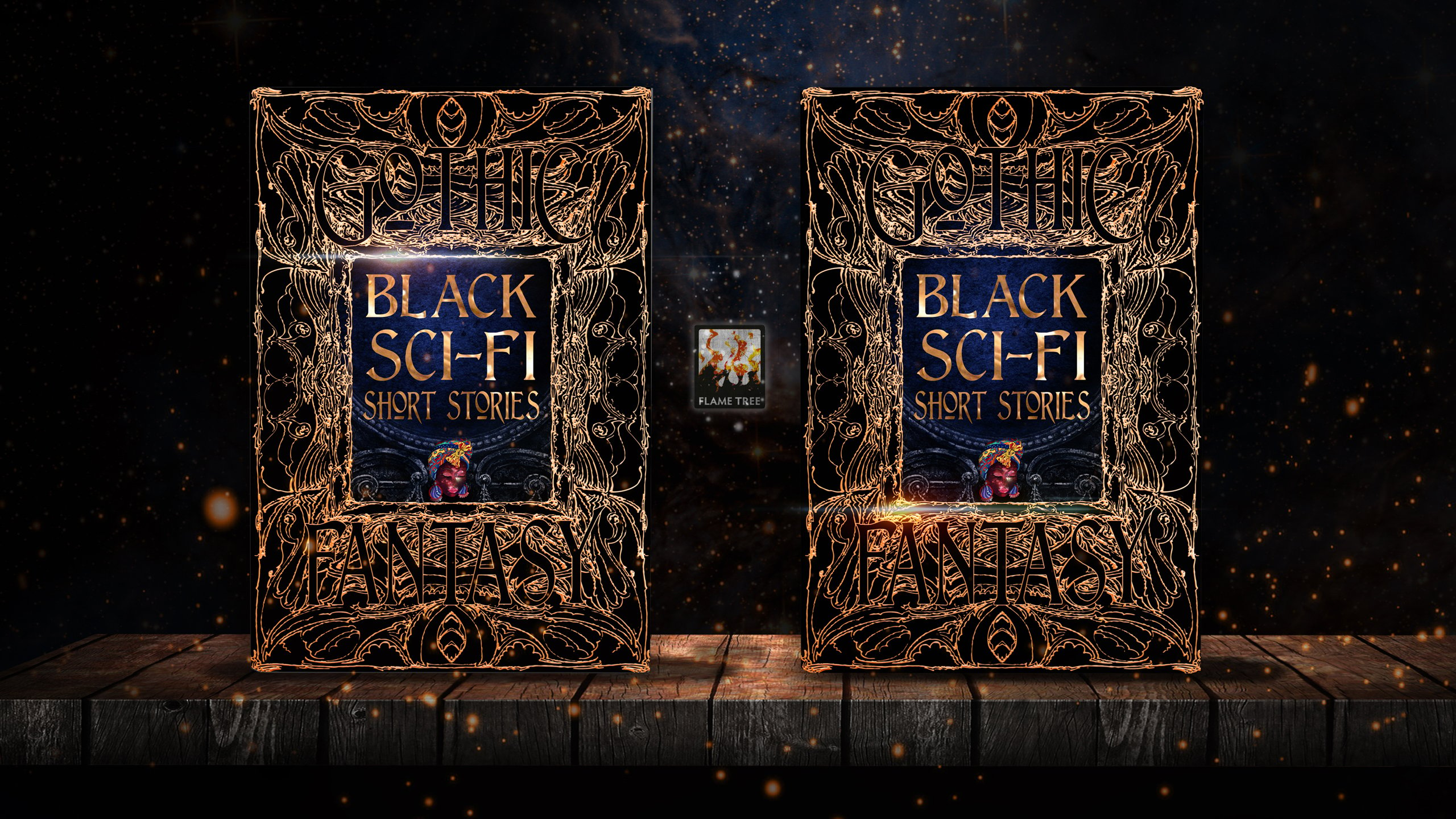 I like to write about obscure famous people, and for whatever odd reason my show-watching habits had resurrected The Ghost and Mrs. Muir. I enjoyed the characters and thought the unattainable love between the two leads quite compelling. This led me to thinking about Hollywood, what that industry wants, tropes in general and how folks not quite within the trope would have to move to be seen.

A recurring dream. My mother passed away when I was in college. We were very close, so this was devastating to me. I dream of her all the time, and for many years most dreams had a recurring element: my mother was alive, but only for a short time, because she had sort of rewound time from her death. Depending on how much time she had she was either sick like she was toward the end or still relatively healthy. I had this dream so often that I started to ask: How much time do we have this time? And dream mom would tell me. Thinking about these dreams about ten years after she died, I started to speculate what kind of mechanism would make this possible. That's how I came up with the worldbuilding part of the story. The rest is all that raw emotion many feel when they lose someone close. And, for people like me, there are some loved ones who you would do *anything* to see again, even if it means hurting yourself. Which isn't the healthiest way of coping, of course. Writing this story allowed me to process those feelings and start my slow path to moving forward. I still have that dream, though.

The inspiration behind ‘The Orb’ was more a feeling than a specific idea. With reproductive freedoms once again under assault in the U.S., I was writing from an increasing sense of claustrophobia and frustration with restrictive legislation being pushed by conservative lawmakers. The patriarchy feels itself under threat, and is responding by trying to impose its irrational and arbitrary standards on American women (i.e. a fertilised egg is human when it’s inside a woman, but not when it’s inside a fertility clinic). When the goal becomes more about control than workable solutions, the methods and explanations stop making sense; and although the fertility in my story isn’t human, these issues of power and control are very much present.

As this is a reprint, I must mention the prompt for the initial anthology, which was for an optimistic science fiction anthology with the theme of water. I have always been invested in environmental issues and was intrigued by the concept of a hopeful look to the future. I had also recently discovered Ted Talks and had come across a video about building with bamboo that I found inspiring. Check it out here. For me the concepts complemented each other really well.

When I began the story, I had no idea where it was going. I just had an image: a man digging himself out of a shallow grave. As I wrote and thought about who this man was and how he ended up in his predicament, certain lines from the poem ‘The New Colossus’ (by Emma Lazarus) popped into my head. Once I started thinking about the Statue of Liberty, the story found its direction.

The setting for this story was inspired by a trip to Colonial Williamsburg and learning of the Black people who lived there, including a free woman who owned her own property. Missionary Rebecca Protten was my model for Marja Anker. A third influence is the miasma theory of medicine, which says bad smells cause disease.

My story ‘Space Traitors’ is inspired by and in direct conversation with Derrick Bell’s short story ‘Space Traders’. I first read his story when I was a teenager, and the incredible infusion of science fiction and critical race theory based on the idea that aliens come to earth and offer to solve all of a future U.S.’s environmental and economic problems, in exchange for giving them all Black people in the country. I wanted to look at what if instead of coming in exploitation, aliens came in solidarity, and offered to all people of colour the opportunity to join an intergalactic rebellion against tyranny, oppression and hierarchy.

A few years back, and many times since, Amazon has been in the news for mistreatment of its workers. Distribution centre employees told the media they walked miles every day and rarely used safety equipment because it would impede their productivity scores. Life in big-box distribution centres seemed like its own dystopian narrative and I wanted to imagine, in my mind, a natural tech-fuelled progression.

e-race: In the early 2010s, I was backpacking around South Asia and saw all these stores full of lightening/whitening products – lotions, deodorants, soaps, skin-bleaching creams everywhere you look. Beyond this painful, tragic reality, I found Waldo Ellison. Here was an elderly man who lived through the Civil Rights era only to be cast into a society of government-mandated ‘racial erasure’. It took me a while, but eventually he gave me the green light to write his story.

Giant Steps: In 2018, I was stuck on another project and listening to Coltrane to get unstuck. Down the rabbit hole of procrastination, I discovered theoretical physicist Stephon Alexander, who wrote The Jazz of Physics and connected ‘Giant Steps’ to Einstein's theory of relativity. Somewhere between his scientific breakdown and my brainstorming sessions, Dr. Charlene Jenkins contacted me to ask if I would transcribe her space odyssey.

Megan Pindling – You May Run On

This is a story about motherhood, inheritance and remembering. All of my stories – long fiction, short-fiction, non-fiction, poetry – grapple in some ways with what it means to forget and then the effort to remember what you’ve inherited. In my community, I have many mothers who were un-published poets, poets in the kitchen as Paule Marshall calls them. Their poems were never written down. I am writing down what I’ve inherited from them.

Sylvie Soul – Suffering Inside, But Still I Soar

I often have dreams where I can levitate. I wanted to write a story to explore how the gift of flight could become a curse, leading to the eventual psychological downfall of a teenage girl. While the story appears to draw inspiration from superhero tropes, it’s actually an homage to the magical girl genre of Japan, which emphasises the inner struggles of its female protagonists beyond the flashy powers.

In short, otherness is what inspired this story. Being from 90s Brooklyn and going upstate to ‘away camp’ for the first time was like traveling to a different world. It was split into ‘city kids’ and ‘suburban kids’. Questions raised there inspired this story: How are you viewed by people you’ve never met? How might perceptions evolve? Are morals shaped by time/context rather than a hard ‘truth’? Blending these ideas with future tech gives you my story, ‘The Pox Party’.

I was talking with a friend about the nature of identity and what essential quality makes us us. By the end of the walk, we had discussed The Sorites Paradox and its application to the nature of identity. By the end of it, I already had the story mostly worked out in my head. It took me another seven months to actually write it down though. The protagonist is a 116-year-old woman who is a sort of syncretised version of many older Yoruba women I’ve met including some of my aunts: clever, sometimes harsh, tough, honest and usually willing to help family members – even the ones they don’t like.

Intrigued by these stories and want to buy the book? Find it here on our website.