Out now, Bodies in the Library is one of our latest short story anthologies to combine classic stories with new fiction from modern authors. Paired with tales from Arthur Conan Doyle, Wilkie Collins, Anna Katharine Green and more, the new stories abound in mysterious deaths, skeletons in the closet, locked-room crimes, and bookish locations! In the first part of this Author Q&A, some of the authors tell us a little about the inspirations behind their stories in the book...

What was the inspiration behind your story in 'Bodies in the Library'?

When I saw the call for mysteries come out from Flame Tree, I was immediately intrigued. I have an odd fondness for film noir. And while I usually come up with the title last, a title popped into my head immediately. The Big Steep. Oh, no, I thought, a parody. No one will want this, Deborah. Put the idea down and back away. Except the thought wouldn’t go away. I read The Big Sleep to get a feel for Chandler’s style, his rhythms, his mastery of tautly turned metaphor, and watched the film, ideas churning. And, as I didn’t feel like writing in the 40s, I wrote in the here and now. Because I’m a fantasy/science fiction writer (though I love mysteries, and they abound in my work), I gave my detective one advantage – precognition. That doesn’t always work as expected. And because my sense of humour is warped, almost every name in the story relates to either Chandler or to tea.

I love ghost stories and I love the idea that a ghost can interact with the living in subtle, little ways. I also really liked the notion that a descendent can have a lot of the same traits of an ancestor so I put the two concepts together and ‘Actions Louder Than Words’ was born.

I originally wrote ‘Pandora’s Book’ in response to a call for submissions requesting blood-themed horror stories. When brainstorming ideas for the story, I remembered an article I once read about the discovery of an ancient book made of human skin. I began to think about how creepy it would be to find such a book at my place of work: a public library. That thought turned into an idea, and then that idea into a story.

Philip Brian Hall – The Last of the Perivales

Oddly enough, the two Victorian sleuths who regularly feature in my stories had never encountered a body in a library. As soon as I saw the title of this new Flame Tree anthology, I knew it was time to remedy that omission. From that point, it was simply a matter of making the case as unusual as possible, since one thing these gentlemen never seem to encounter is a run-of-the-mill crime.

Many haunted house stories like Haunting of Hill House and The Shining frequently feature characters who are unfamiliar with ghosts or anything supernatural and it made them so easy to terrorise. There was a video game, Vampire the Masquerade, that had you play through a haunted house level as a vampire and it made me interested in the idea of a story with this type of setting featuring a protagonist who was a lot savvier and experienced with this world. I wondered how someone who was powerful and well versed with magic would handle a horror story situation and how that experience would influence their reactions to unnerving predicaments.

Felicia Lee – Every Day Is Thursday

I’ve been fascinated by the idea of haunted houses since I was little, and this led to a love for house museums and local history. I love visiting them and imagining what daily life was like for the original inhabitants – and I also wonder how much their accomplishments have been exaggerated or sanitised for public consumption. Small local museums in particular seem prone to hagiography rather than objective history.

To my mind, the most interesting mystery stories are the ones steeped in uncanny atmosphere. That’s why I love locked-room mysteries, where misdirection and black magic often go hand in hand. My detective character – Joseph Spector – has appeared in a large number of stories, almost all of which originated from research into the art of misdirection. ‘The Octagonal Room’ is my attempt to create a macabre tale incorporating the gothic tropes I admire, combined with a murder method which is fiendishly practical.

Wendy Nikel – The Book of Futures

At the risk of giving away the ending, this story was inspired by the Hohenburg Abbey, a nunnery built upon a peak of the Vosges mountain range in France. Though first established in the seventh century A.D., the current buildings were reconstructed in the seventeenth century after a fire destroyed the original ones. In the early 2000s, a mystery involving the theft of over a thousand rare books took place in the abbey. Though the outcome of the real-life mystery is different than the one in my story, the incident was the inspiration for ‘The Book of Futures’.

Patsy Pratt-Herzog – The Case of the Expired Wizard 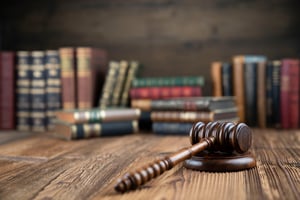 This was something of a character development story for me. I used characters from a steampunk novel I'm currently writing. You can find another of Prudence's adventures in the Flame Tree Detective Mysteries short story collection.

My inspiration came from the theme of the anthology. My mind immediately started wandering towards the kind of homes lucky enough to have separate libraries, versus the overcrowded bookshelves in my own living room and bedroom. I like strong, smart female characters and for this story I thought about the characters and setting first and then the plot began to unfold on its own. I went through several drafts and my writing group helped tweak parts that weren't clear or didn't quite make sense.

I work as a librarian by day, and there are a few iconic librarians in film that have stuck with me over the years, one being Evelyn (Carnahan) O'Connell from The Mummy. I did some research and learned that Brits have long been fascinated by Egyptian artifacts, so I decided to have some fun and write a mystery tying these elements together. I usually write fantasy, but I greatly enjoyed getting out of my comfort zone and bringing some new characters to life (even if their existence was, ahem, short-lived).

You can read these stories and more in 'Bodies in the Library: Short Stories', available to order through our website here!