Our recent release Compelling Science Fiction is packed full of fascinating stories on the plausible side of the SF spectrum. The story selection, consisting of new and recent stories by modern authors alongside classic fiction from the genre, was formed in collaboration with Joe Stech, foreword writer and consultant editor of this anthology and publisher of the Compelling Science Fiction magazine. In this first part of a Q&A with some of the book’s authors, they reveal the inspirations behind their contribution…

I wanted to explore the implications of satellite constellations and Kessler syndrome, neither of which I’d seen discussed much in fiction. Satellite constellations like StarLink are a real threat to dark skies everywhere, not just for professional astronomers like me, but for everyone. I was also thinking about the space industry: it’s a big machine where it doesn’t seem like one person could make a big difference, but what if someone could?

I was thinking about how people often start a relationship (be it romantic, platonic, etc.) with everything so perfect, then wind up taking each other for granted over time. That led to thinking about what that experience would be like if we ever make machines with feelings. Would we treat them with consideration for those feelings, or would we simply lose interest like we tend to do with so many things we’re initially excited about? Is it fair to these machines, and by the same token, is it fair when we treat each other that way?

Deborah L. Davitt – To Dangle by a Thread

The inspiration for my story came directly from an article I read talking about a space line vs. a space elevator, and the thought that a space line would be more economical and safer than a space elevator – and could be made with today’s materials! I thought the idea was fascinating, but a story demands drama… so what could go wrong with a space line, I thought? Plenty, I thought. And then I was off to the plot races!

Jonathan Ficke – The Memory You Are Trying to Access

When I was a young child I participated in an FDA trial for a new type of allergy shot. I had seasonal allergies, and this new medication completely, 100%, cured my allergies. The study ended and they offered to keep administering the medication if they could keep collecting data. This went on until the FDA approved the drug, at which point we were asked to pay $1,000 per shot, one shot every week and no insurance would not cover it. $52,000/year was a bit steep to cure seasonal allergies, so I stopped taking the medication (and resumed sniffling at pollen). Taking that experience and mixing it with having to explain to my parents the minor cosmetic changes to their phones every time Apple pushes out an iOS update, and I realized there was room for the two to combine into something fairly tragic.

Sarah.exe is an examination of my own fears. The line of work I’m in is almost exclusively done at a computer, and there’s always this worry about what this is doing to the body, let alone the cost we’ve incurred to our collective attention spans and mental states. So the idea of someone connected to tech, doing ‘all the right things’, and what happens regardless, was something I wanted to poke and prod at.

A couple years ago I read an article detailing studies at the University of Chicago surrounding regenerative qualities of the West African Lungfish and how we, as humans, might be able to activate certain genes within ourselves to enable us as a species to regenerate lost body parts just the same. Coupling this article with past (and potentially present) horrors of minority-centric medical experimentation, the story at that point came to life. For me, few things are more horrific than the scientifically and technologically plausible, especially when we’re talking about the atrocities often committed between one human and another, intentionally so or not.

I’ve always been a fan of Mr. Spock from Star Trek, along with a secret wish that people could be more logical like him. Long ago I had a discussion about this with my uncle, Dr. Sol Snyder, who for many years was the director of Neurology at Johns Hopkins University. (It is now the Solomon H. Snyder Department of Neuroscience.) Afterwards I read up on the topic… and then forgot about it for a couple of decades. Then, one day while brainstorming for my next story, I remembered this and read up on the subject again. I also peppered Sol with questions on how to surgically remove emotions. Soon the story formed in my head, and it almost wrote itself. Ironically, as often happens in such cases, maybe 1% of the research ended up in the story – and in this case, it was mostly in one sentence, which explains what is required in this dystopian society for everyone on their thirteenth birthday: “As required by law, doctors had been scheduled to cut into his brain – the amygdala, the ventral striatum, parts of the prefrontal cortex, and other areas – to rationalize him.” (Rationalize in the story means to remove all emotions.) So yeah, apparently it is theoretically possible to do such an operation to remove emotions, but probably not practically possible at this time. The story itself, however, is not about the brain – it’s about an underground rebellion, which leads to them training their children to pretend to have no emotions so that they can fake they’ve had the operation. At the climax, of course, this training is put to the test.

I’m always fascinated by the impact new technology has on human relationships. Today, for older people, new technology is often touted as granting seniors greater independence, the opportunity to ‘age’ in their homes safely, without relying on others. But, while being independent is great in terms of physical needs, not having to rely on others can lead to another problem: social isolation. So maybe, technology should help us with that too…

Neotony, which is the evolutionary retention of certain juvenile traits into adulthood. This trait is seen in the development of wildcats and wolves into their modern domestic cousins, where being perceived as ‘cute’ by humans proved to be an evolutionary advantage. The idea of a species that could weaponize its neotony resulted in ‘Exorphin’.

‘Always and Forever’ came from two sources: The scenes in the hospital of an adult child sitting at the bedside of a dying mother – that was me, sitting with my mum after her heart attack. She did pass away not long after. I spent days with her in the hospital. It was difficult for both of us, as I’m sure you can imagine, trying to stay positive, both of us knowing she would die soon. The other source was a story I wrote called ‘The Weight of Infinity’ (printed in LampLight magazine); I wanted to show how that future started out.

I was reading an online article about general noise pollution, and the language of catastrophe it used to describe unwelcome sound captured my attention. At the same time, mask-wearing had forced me to abandon my lifelong habit of lipreading to accommodate for my hearing loss, and trial hearing aids once again. The idea that there might be a society that chose deliberately to block sound out came naturally at that point!

I tend to lean toward abnormal events in familiar settings. Having the family’s hopes and prayers answered in such an unexpected way explores what it means to be human. Is the seductive offer of the Volunteers worth the risk? I like to explore trust and how wanting a thing badly enough can overcome the fear of the unknown.

This is the only short story that I’ve written that is intended for a younger audience. The wonderful Canadian SF writer Julie Czerneda invited me to submit a story for an SF anthology she was editing aimed at grades seven and eight students in Ontario. All stories in the anthology were to incorporate aspects of the science curriculum from those grades. My topic was plate tectonics in geology. I’d always found continental drift fascinating: continents and pieces of the world’s crust moving around, all fitting together like a big planet-sized jigsaw puzzle. Hence, this story. It was a finalist for Canada’s Aurora Award in 2005 for speculative fiction. I may return to the Wormers one day.

David Tallerman – Across the Terminator

It’s a long time since I wrote this one, but I dimly recall the jumping-off point being an article regarding the likelihood of finding ice buried on the lunar surface. I’m not much of a science guy and my science-fiction stories tend to be more about the people affected rather than whatever’s doing the affecting, so I moved on quickly to thinking about what that would mean to someone living on the moon, who those people might be, and what kind of mindset you’d need to be in for the discovery of a substance that to most of is us utterly routine to be huge and life-shaking. I guess that’s really the core of the story: people in an extraordinary situation who’ve come to view it as mundane encountering something that lets them see, once again, how incredible their circumstances are.

‘I, Arachnobot’ is my tribute to Isaac Asimov, and it came out of a challenge I posed to myself: could a determined robot figure out a way around the Three Laws of Robotics? At first, I considered this simply a playful logic problem… something to pass the time while I was out for a walk. Why would a robot want to evade those behavioral restrictions? What circumstances would even permit this to happen? I didn’t want it to be something nefarious – no Terminator situation, for example. But what if a robot was upgraded to serve as a guardian of sorts? Not exactly a bodyguard – not at first – but as a companion to one specific person? And why if that one specific person was suddenly under threat? The reason I chose a spider as the robot’s form had everything to do with my walk: I’d passed a spiderweb suspended between tree branches, and decided this could be the basis for the story. And I liked the reversal of using a spider – nearly always the antagonist in fiction – as the hero. With this in mind, the rest of the tale fell into place.

I wrote ‘The Time Mechanic’ because I was tired of time-travel stories that made people from the future always seem smarter than people in the past. It was a kind of chauvinism I rankled against, much like the way lower-class people are often considered less educated than they are. Chances are, a time-traveller who bought his machine instead of building it himself would know about as much about repairing it as I do my electric car, and a person from the remote countryside in the 1920s who had experience repairing engines just might have a better shot at it. Also, I love the idea that if I had a time machine, I’d use it to sample cocktails of the past. 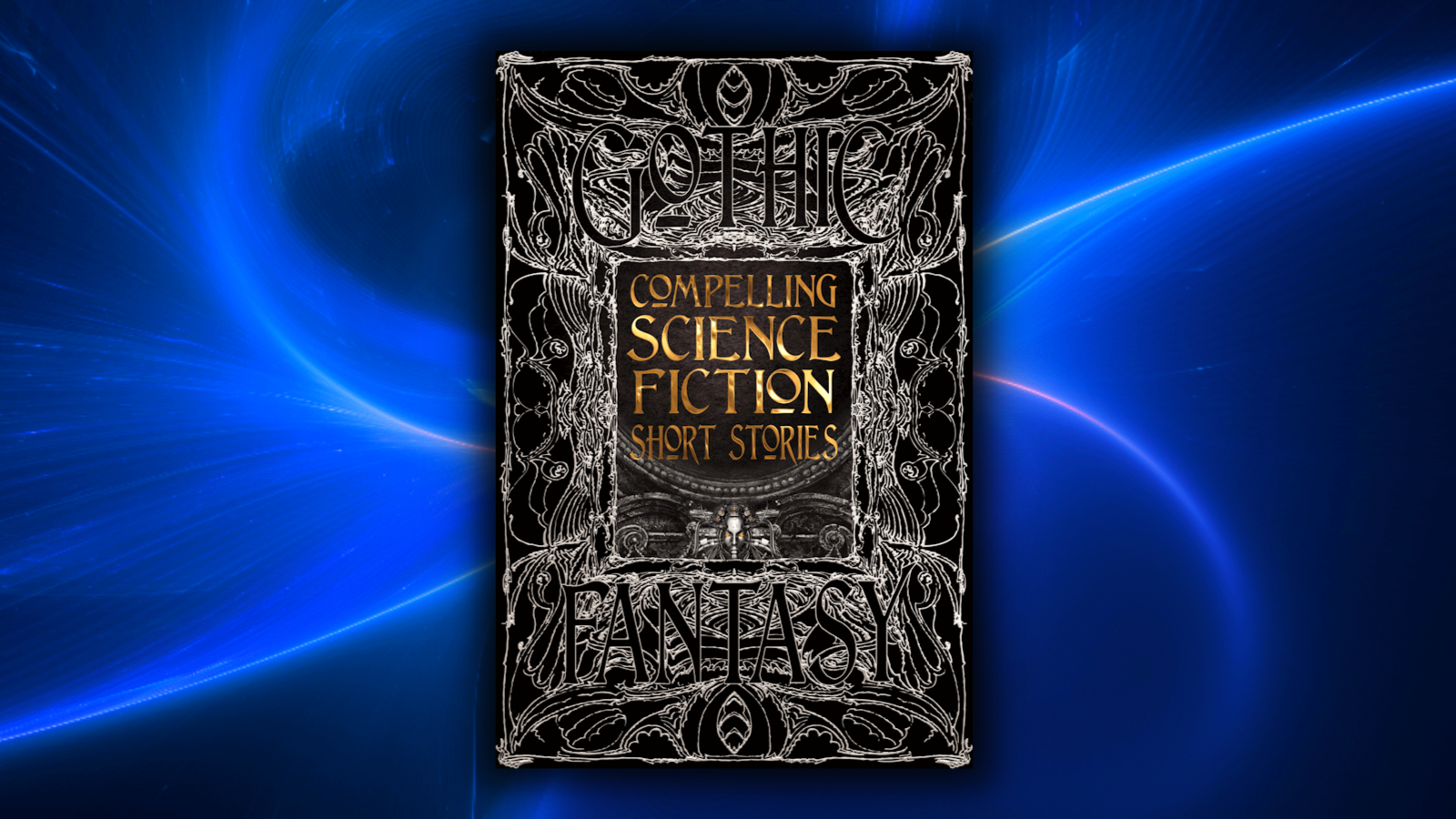 To read these stories and more, buy the book from our website!