To kick off this week’s series of blogs to celebrate out January releases, we talked to Daniel M. Bensen about his new book, Junction. He talked about his inspiration for the book, world building and how he came up with the aliens in the story. If you like scifi, we’re sure you’ll love Junction from Daniel M. Bensen.

The first question is obviously, what is the book about?

I have a friend from college who went on to become a marine biologist, the illustrious and amphipod-probing Dr. Kat Anderson (see her on twitter at @KatMAnderson). Once, talking about conservation, Kat wondered aloud whether, if we got a new continent to explore, we'd do anything better with it than the British, French, and Spanish did with North America 500 years ago.

That got wheels turning in my head. What would happen if we suddenly got access to a whole new world? I wanted the civilization in the book to be ours, so no space flight was allowed, and I wanted the wormhole to be old but unknown to science, so it couldn't be in downtown Baghdad or anything. I could have put the wormhole in Antarctica, but lichen is boring, so I put the it in the New Guinea highlands, where it could plausibly have stayed unknown until just now. To further stir the pot, I put the wormhole right over the border between the independent state of Papua New Guinea and Papua, a province of Indonesia.

So we have a situation just as interesting and full of conflict as the 17th-century North Atlantic. Lots of players, lots of asymmetries of power, tons of unknowns, and very high stakes. It will take way more than one book to let all the political dust settle.

That sounds amazing! What would you say are the central underlying themes?

I wrote Junction in the year of the birth of my second daughter, which was also the year I developed cancer in my large intestine. At first, I thought my symptoms were just lack of sleep, and spent most of the year in a state of every-increasing pain, exhaustion, and depression. There are parts of Junction, especially the parts near the end of the book, where I can see my own problems reflected in Daisuke and his struggle to survive. Then, over the course of my recovery as I edited Junction, I saw another theme emerging; survival is hard, but it's also beautiful. As living things, we are the way chaos organizes itself, as wonderful as any wormhole.

With such a real life inspiration for the setting and some of the drives in the story, did you base your characters on anyone you knew?

Dr. Kat Anderson was the inspiration for Dr. Anne Houlihan, except I made Anne Australian rather than American and, honestly, removed about half of Kat's biography because nobody would believe it.

I also based the story of Junction very loosely on the exploration of Lewis and Clark, whose Corps of Discovery trekked through my parents' back yard in Lolo, Montana. The geography of the Bitterroot Valley bears a strong resemblance to the area around the Earth wormhole on Junction, and two of Lewis and Clark's companions, Sacagawea and her common-law husband Toussaint Charbonneau, inspired the characters of Sing and Tyaney.

Was there a process for creating the aliens in Junction?

For this project, my creature-creation started with biochemistry, then proceeded through mobility, then embryological development. So for the shmoos, for example, I imagined a system that used hydrochloric acid to dissolve glass and re-secrete it into a globe like a fishbowl to hold an animal's internal fluids and organs. The fishbowl moves by rolling as the animal inside it shifts its weight, and keeps its water-based and acid-based fluids separated by a layer of silicone. That logic generated a whole slew of creatures, from plant-like organisms that plate the ground of the glasslands to herbivores shaped like wheels and sea-urchins, to the predatory shmoos themselves.

That sounds like it took a lot of time and thought to create. It seems like you are extremely concerned with making sure the details are correct so how do you do your research on the snippets of human languages you include in the book?

For Japanese, Indonesian, and Russian, I found native-speakers to help me. One, my Japanese teacher here in Sofia, was kind enough to help me translate Daisuke's conversation with his director in chapter one from English to Japanese and back again so could I get a grip on his voice.

I couldn't find native speakers for any of the Nun language's real-life relatives (Eipomek, Ketengban, Yali, and most importantly Nalca), but I read all the materials I could find about them. Then, I horribly misunderstood those materials! The mangled, simplified grammar and mixed-up vocabulary that resulted seemed plausible as an avoidance language (specifically a "pandanus language") spoken in taboo circumstances like, for example, when talking to outsiders or when on the wrong planet.

Were you ever tempted to just throw scientific realism out the window and create something impossible for the fun of it?

It wouldn't be fun for me. I learned a long time ago that the sort of world-building that satisfies me is speculation. Start with point A, say an earth-like planet tidally locked to its red-dwarf sun. It only has one face getting sunlight, so how does its biosphere evolve to deal with that? "Plants" that harvest energy from the wind that blows from the day to the night side? Crystals that redirect light onto the night side? How would animals evolve to take advantage of those plants, and how would the plants return the favor? The ecosystem I ended up with, besides being satisfying to make, has the advantage of teaching the reader something. Even better, the reader can keep track of Anne's discoveries about the biology of Junction and make predictions. There are more mysteries in Junction than just the murders.

When you are building a world that detailed, is there somewhere specific you like to write?

I mostly wrote on my kindle while walking around in circles in Knyazheska Gradina near my office or on the bus somewhere else in Sofia. Writing while traveling helps shut up my internal censor.

I also highly recommend Belchin Spa in Tsari Mali Grad as a good place to outline a novel. For editing, try a ski resort in Borovets. They certainly worked for Junction.

Some authors have mentioned liking writing to music and others need dead silence, what works best for you?

When I'm at my computer, I listen to a book-specific playlist while I write. The Junction playlist is here, and don't look at me like that. It grew like that organically. I don't know how those Storybots songs got there.

Right now I'm writing The Centuries Unlimited, a detective-noir family saga with gangsters and time travel. It's mostly about hope and the future.  I also have a historical fantasy, the Sultan's Enchanter out on spec right now.

Well we can’t wait to read all of that! Thank you, Daniel. 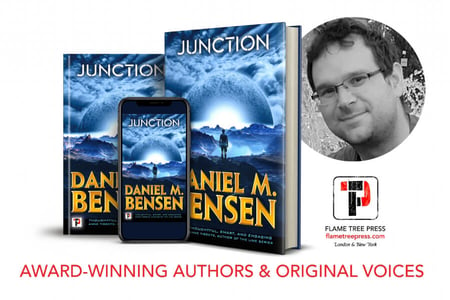 Thank you to Daniel for sharing his process with us and for talking to us about his new book. Junction, as well as our other January releases will be available from Thursday 10th of January! It will be available in paperback, hardback and ebook. Check out our website for details.

Daniel M. Bensen writes alternate history, science fiction, and fantasy, always with a bibliography. As well as Junction, his work includes the Sidewise Award-winning short story Treasure Fleet, which is featured in the Tales from Alternate Earths anthology and his novella Petrolea. Dan was born in Chicago and has since lived in Maine, California, Montana, Japan, and Boston. He currently lives in Sofia, Bulgaria, where he teaches English and resides with his daughters, wife, and in-laws in the Balkan Tower of Matriarchy.