Next up in our October author Q&As we have Frazer Lee, author of Greyfriars Reformatory. He lets us know what the book is all about, some of its themes and what influenced him to write it! Be sure to check in tomorrow for more writing inspiration!

Emily is institutionalized at Greyfriars Reformatory for Girls, a desolate place where the guilty, downtrodden and forgotten dregs of society are sent for rehabilitation. Principal Quick rules the roost with a brutal regime of developmental learning, physical activity, and discipline. When the inmates begin to die in brutal and suspicious circumstances, Emily is shocked to discover that they are being haunted by the mysterious ‘Grey Girl’. As the bodies pile up, Emily’s personality disorder may be the only thing that can save her.

I tend to write about already damaged people who find themselves in potentially damaging situations. This book takes a look a favorite theme of mine: Guilt. How can we overcome it, and to what extent is if imposed upon us by societal regimes? I am also fascinated by ‘What if?’ scenarios: What if a young woman’s personality disorder is the only thing that can save her from a supernatural force?

The characters are entirely fictitious, but do possess qualities I observe in people around me, and both the light and darkness I think we all possess, beneath the masks we tend to wear in public.

I have been developing Greyfriars Reformatory as a film project and felt compelled to get deeper into Emily’s character and story in a novel. I was influenced along the way by the high school horror movies of South Korea, and by the atmospheric writing of Angela Carter, Susan Hill, and Patrick McGrath.

However crazy your idea might seem, trust me, someone else has always gone crazier. Don’t hold back, just throw it all down and you can always rein it later. Invest in a robust coffee making machine, you’ll need it. Oh, and switch your internet connection off until you are ready to emerge from your writing session. The only real difference between writers who ‘make it’ and those who don’t is that the former keep at it and don’t ever give up.

I am incredibly lucky to live in a wonky old cottage that dates back to the fifteenth century, and I channeled its atmosphere into every page of this book. I also wrote and edited on trains, on planes, in Dalian, China, and at the British Library in London. Oh, and a variety of coffee shops, because the Holy Bean can definitely help with writing!

I tend to write to music, especially film scores, and build playlists for particular projects so that I can ‘fast track’ back into them. This book was helped along by Ladytron, Tangerine Dream, and Hans Zimmer’s scores for The Ring and The Ring Two.

I have a new horror film screenplay on the go, and I am outlining the characters and storylines for my next novel. I am also researching my PhD, which examines the themes in my novels.

Thank you to Frazer for taking the time to talk today about Greyfriars Reformatory. You can pick up his book, along with the other October releases now. It will be available in paperback, hardback and ebook. Check out our website for details. 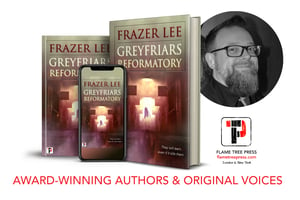 Frazer s novel The Lamplighters was a Bram Stoker Award® Finalist for Superior Achievement in a First Novel . His other published works include the Amazon number 1 horror/thriller Panic Button: The Official Movie Novelisation, novels The Jack in the Green and The Skintaker, and the Daniel Gates Adventures series of novellas.