Following on from our recent blog on the successful submissions for Supernatural Horror and Lost Worlds, we proudly present the selected short stories for this year’s Time Travel and Heroic Fantasy anthologies. They join our growing range of deluxe hardcover themed anthologies, which can be found here.

With nearly 2000 submissions across the four anthologies, this year’s selection process was a truly difficult but enjoyable task. Past and future intertwine in the Time Travel volume, which gathers together the best of today’s fresh talent alongside a selection of the ‘timeless’ short fiction that helped form the genre. Meanwhile, majestic mythical beasts abound in the Heroic Fantasy collection, with adventures in sorcery, swordplay, and fantastical lands also bringing original tales from contemporary authors together with classic storytelling. 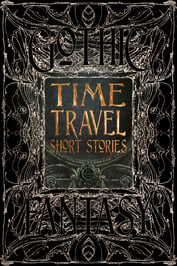 The Meaning That You Choose by Bo Balder

The Shape of My Name by Nino Cipri

All for Bellkins by Tony Genova

Murder or a Duck by Beth Goder

Eternity and the Devil by Larry Hodges

The Berlin Doctrine by Anton Rose

A Brain, A Heart, A Home, The Nerve by Valerie Valdes

This Door Is Locked by Adam Vine

A Matter of Interpretation by M. Elizabeth Ticknor

Burned Away by Kate O'Connor

Dragon and Wolf by Zach Chapman

Erzabet and the Gladiators by Susan Murrie Macdonald

Five Fruits I Ate in Sandar Land by Michael Haynes

The Mage’s Tower by Beth Dawkins

Oaths Betrayed by A. Creg Peters

Of the Generation by Therese Arkenberg

Rhosyn am Ufel by Erin Gitchell

Those Who Wear Their White Hair Proudly by Lauren C. Teffeau

To the Ends of the Earth by Amy Power Jansen

The Tremor Road by Tony Pi