Continuing our look at some of horror's most beloved elements and mainstays, we are turning our head to Halloween itself. Halloween is built around horror and scaring away evil spirits but its history in horror fiction is relatively short. Many scary stories are told on Halloween, but until the mid 20th century they did not often reference the holiday itself. In this blog we will be looking at the history of the holiday; where did it come from, what's it about, and when did it become a feature of horror stories?

Halloween, a sort of portmanteau of All Hallow’s Eve, is a feast that traditionally focused on the remembrance or celebration of the dead. Its origins are debated with some claiming it began as a Christian festival and others suggesting it piggy backed on pre-existing pagan festivals. Either way there are traces of a Halloween-style celebration, a name that surfaced in the mid-18th century, dating back to the middle ages.

The Celtic festival of Samhain involved many traditions we now associate with Halloween and other autumnal holidays like bonfires and the wearing of costumes to ward off evil spirits and ghosts. The 1st of November became designated as All Saints Day, to celebrate dead saints, and the night before developed into the beginning of a 3 day celebration or festival. It incorporated many of Samhain’s traditions leading to the suggestion that it usurped the pre-existing pagan festival.

Traditionally Samhain marked the end of the harvest but also the entry into the dark part of the year. At this time it was easier for spirits and other supernatural beings to come into our world as the space between our world and theirs thinned. Many of the traditions have been retained in some form with some dying out only in the past hundred years. One of the very popular traditions that is no longer common was divination. This often involved mirror gazing and attempting to learn about your future. At the turn of the last century this was still a very popular practice but died out as these practices become frowned upon. Another practice that fell out of favour was bonfires that were intended to stop spirits falling to earth and later developed into a way to scare away the devil. The fire in a Jack O’Lantern would come represent the same thing although early versions of these were actually carved from turnips, not pumpkins, as they were more common in Ireland and England.

The practice of dressing up appeared in the 1500s. Initially termed guising, due to the disguises that were worn. People (mainly children) would dress up in scary costumes to ward of evil spirits and to go and knock on doors. This practice then took different paths in different cultures of the world. In America a child will say “trick or treat” with the suggestion that you have to give them a treat to avoid a “trick”. In places like Ireland and Scotland, where these practices originated, the meaning was slightly different. As the children would knock on doors they would perform something, a song or dance, and in affect were earning a treat for their trick.

Costumes, sweets and candy are now the most well know aspects of Halloween. Few people relate it to the end of harvest or scaring away spirits and even less use it as a festival to celebrate Christian saints. It has become a time for parties and fun and a constant feature of horror fiction since the 1970s. There are countless books and films featuring Halloween, the Halloween franchise alone has eleven of them. It is surprising that the seemingly perfect setting of Halloween was not used as the basis for horror fiction since it's inception. The costumes, the association with ghosts and the already scary vibe of the holiday would lead you to believe it would have been ripe for turning into horror fiction much earlier. Now it seems like part and parcel of the horror genre but it is, surprisingly, a rather new feature in horror stories and films. It's not that it was never featured as the basis for horror stories but it wasn't used very often, especially when compared with the amount it is used today. People told scary stories on Halloween and lots of plays and films were performed and shown on the night but Halloween itself was rarely a central feature of these. 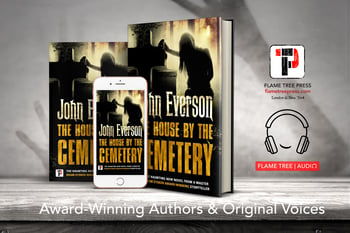 Gladly, writers have made up for that in recent decades with many horror stories now having interesting takes on using Halloween to tell chilling tales. One of the most recent iterations of a Halloween story is from our own list of titles: John Everson’s The House by the Cemetery. Using a real life haunted house and to tell a story about turning it in to an attraction for Halloween, the book revels in all the Halloween films that people love. Its mixture of fun, fear and fan service makes it a perfect read for this season.

If you prefer a more history based look at horror tropes then you might also enjoy Flame Tree’s The Astounding Illustrated History of Fantasy & Horror. It details the developments of movies, TV, art, comics, magazines and fiction. Learn more about the things you love and discover some things you might never have known about in the first place!