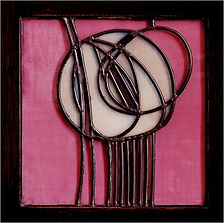 Married to Margaret Mackintosh (née Macdonald) the pair were part of The Glasgow Four along with Margaret’s sister Frances Macdonald and her future husband Herbert MacNair. Prominent members of the Glasgow School movement, the four exhibited their work in Glasgow, London and Vienna, before going on to influence the Viennese Art Nouveau movement known as the Vienna Secession. Here, on the anniversary of Mackintosh’s death we take a look at two of his key projects, Glasgow School of Art (1897–1909) and The Willow Tea Rooms (1903).

In 1896 a competition was announced to draw up designs for a new building to house the Glasgow School of Art. Eleven firms entered and Honeyman and Keppie won with Mackintosh’s plans. There was an immediate outcry. The strong friendship between Mackintosh and Francis Newbery, head of the school, was no secret and it was rumoured that that was why Mackintosh had secured the commission. Mackintosh’s plans were also criticized for being Art Nouveau in style and for failing to register the importance of historic traditions of architecture. His plans were, in fact, an extraordinary accomplishment for a young architect and addressed the difficult site parameters head-on and creatively. 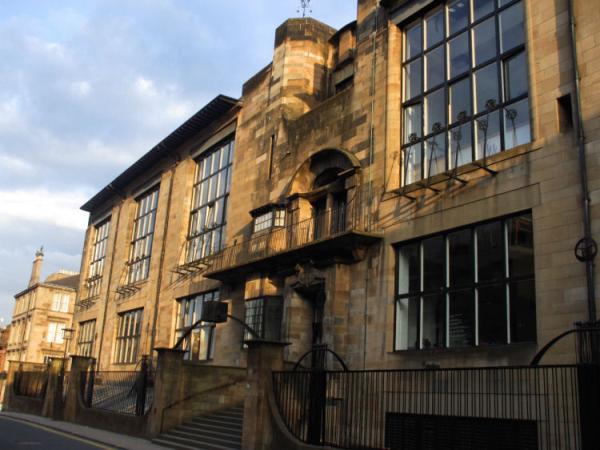 At the time of submitting the designs for the School of Art, Mackintosh was a junior architect with the firm Honeyman and Keppie. John Keppie was at first publicly credited with the project. This was in spite of the design having clearly been drawn by Mackintosh, and, during the laying of the foundation stone on 25 May 1898, Mackintosh remained very much in the background. By the time of the second phase of building form 1907 to 1909, Mackintosh had become a partner in the firm and his name appeared alongside his plans. 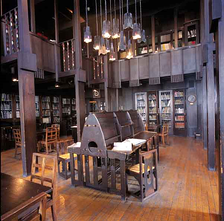 The library is quite possibly Mackintosh at his most brilliant. Soaring oak posts support substantial beams holding up the gallery and rhythmically dividing the room into a space of unequalled harmony. There is an undeniable parallel between the physicality of the room and the concept of the tree of knowledge, seen through the heavy oak posts reaching towards the central grouping of 13 lights suspended from the ceiling on tendril-like cords. The symbol of the tree was one that Mackintosh used repeatedly through his career and in all areas of his art.

The Willow Tea Rooms were built on Sauchiehall Street, a popular and fashionable area of Glasgow. ‘Sauchiehall’, translating to ‘alley of windows’, provided the foundation for the entire decorative scheme throughout which Mackintosh alluded to and evoked the willow tree. Although he was able to design the façade and interior arrangement of the building, he had to work with an existing structure situated on a narrow and restrictive site. His solution to the scheme was a brilliant display of startling Modernism, far ahead of its time. He created a building that rests easily between its neighbours and yet also stands alone in its harmonious asymmetry. 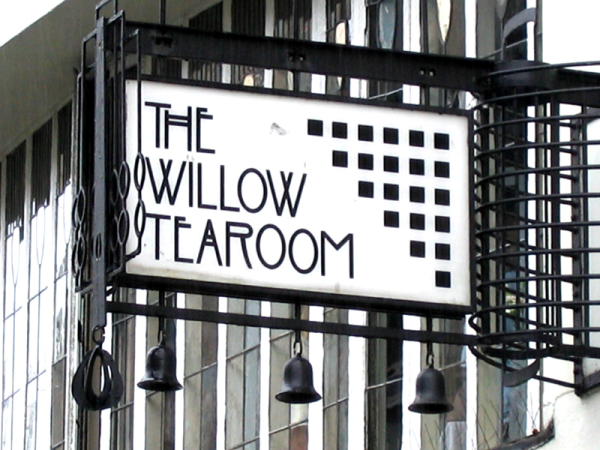 One of the most striking features of the exterior was the first-floor expanse of glittering window spanning over six metres (18 feet). This marked on the exterior the jewel-like room of the Salon De Luxe on the interior. The façade was white and divided by a narrow projecting hood, below which the first-floor window saw in a gently curving plane. Above, the façade curves on one side and is pictured by recessed grid-like windows. The black-and-white chequerboard design on the sign is continued through the façade, running up each side of the building and decorating the window surrounds.