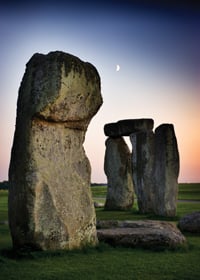 Stonehenge is a beautiful and culturally important landmark for British Tourism. Standing at the centre of a field in Wiltshire, it draws thousands of visitors a year from all around the world. It is an icon of intrigue, early architecture and historical ceremony.

In celebration of English Heritage's new Stonehenge visitor centre opening last year, let us take you on a quick tour of the ancient monument that brings forth droves of visitors every day.

Stonehenge's name derives from the ancient word 'stan' meaning stone, and 'heng' which means hanging. It is thought that it was given this name due to the monument's appearance.  One of the first images of Stonehenge is from a manuscript illustration dating between 1338–40. It shows Merlin, the ancient court wizard, placing a lintel; this image was most likely drawn in accordance with the myth that Stonehenge was first built in Ireland, before Merlin used his magic to transport it to its new home in England.

The land for the structure was first cultivated in 300 BC, where workers raised the ground and dug a small trench around the outside. The structure itself dates back to the late Neolithic period and early Bronze Age, where it was used for hosting ceremonies which focussed on the passing of time such as the seasons, and ceremonies too, that also acknowledged the passing of one from life into death.

Though the central structure stands strong and unchanged over the years, one can notice up to 56 holes surrounding the monument. These are called Aubrey Holes and although there are many theories surrounding their purpose, evidence is inconclusive. They may have been used for placing timber or other vertical stones for a more temporary addition to the structure, or to assist creating the structure itself. They remain an enigma, unsolved.

The Mystery of the Slaughter Stone

There was a macabre theory surrounding one stone – people thought it was used for human sacrifice. It was dubbed the 'Slaughter Stone' and when visitors saw it streaked with red, they feared the worst. It has since been proved however, that the red is merely the stone's iron content which stands out when made wet by the rain.

Stonehenge is steeped in an amalgamation of historical events: The carvings of axe-heads and daggers that can be found upon it date back to about 1700 BC, whilst the 350 burial mounds that surround it, are prehistoric.

First excavated in 1620 by the Duke of Buckingham, the site was sold at a public auction to Cecil Chubb for the price of £6,600. However, it was returned to the nation in 1918.

An incredible feat of effort and engineering, the Bluestones that contributed to the third stage of building weigh up to 5 tonnes and were transported from the Preseli Hills in Wales. However the Sarsen stones (the upright pillars), weigh on average 25 tonnes. Quite an achievement – one that perhaps makes its brother Woodhenge, look a little lacklustre. 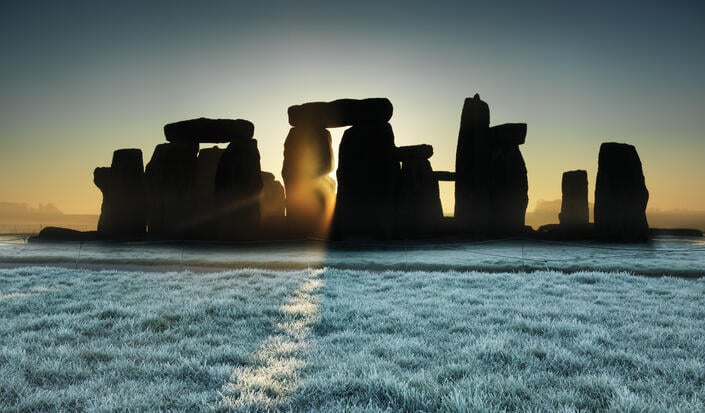