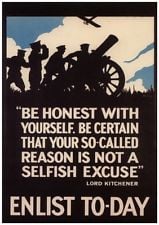 2014 marks the centenary anniversary of the outbreak of the First World War. In the early twentieth century before the invention of the telephone and television, the poster, originating in late nineteenth century France, successfully promoted commercial advertisements. From the onset of the ‘Great War’ with Germany in August 1914, for Britain and her Allies the poster became the most effective form of mass communication. Poster propaganda was utilised nationally and locally: to recruit, to boost morale, to raise funds, encourage thrift and support the war. Below we'll take a closer look at recruitment WW1 posters and how they encouraged men to enlist.

A Call To Arms

Enlistment remained a free choice in Britain until 1916 when conscription was introduced to sustain troop numbers. From 1914–16 the Parlimentary Recruitment Committee (PRC) produced 12.5 million copies of 164 poster designs. The enlistment campaign ran from October 1914 to September 1915. With conscription the PRC refocused propaganda on patriotism to sustain support, and motivating fundraising for the war. When the USA joined the war in April 1917 their posters for recruitment were upbeat in contrast to those of battle-weary, money-poor, Britain.

During the war years poster designers and illustrators promoted a country’s identity through symbolic imagery; often visually translated in a nation’s flag it always generated patriotism. In Britain, the Union Flag and image of Britannia symbolised a nation united through its long history. For France the image of Marianne, the popular female personification of France, alongside the French tricolour, caught public imagination. For America, the female personification of Liberty and the patriotic ‘Stars and Stripes' flag, as well as the figure of Uncle Sam, were utilised to unite, inform and convince Americans that U.S. participation in Europe’s battle with Germany was for the sake of global unity and peace. 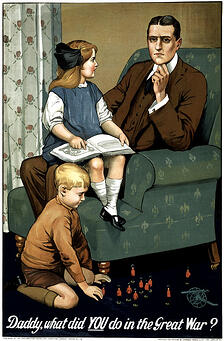 Reading letters from enlisted men, for many recruitment had been thrust upon them. The shame of being handed a coward’s white feather in the street and being shunned by friends or family persuaded them. War propaganda asked why sons, fathers, and boyfriends were still at home, not enlisting? Added to this, the bombardment of Scarborough, reports of German atrocities in Belgium, and the sinking of the British ocean liner RMS Lusitania created emotional blackmail on a mass scale. And it worked.

A positive representation of what the ‘new armies’ were fighting for was a priority for the British government and the military. The realities of war were hidden in shadow or not shown. A poster claiming 'He's happy and satisfied', 1915 is unlikely to be a true sentiment from the front lines, but encouraged men to sign up to something exciting and glorious. Positive depictions, so different to the realities of warfare, were essential, to show that recruits were engaging in military life and enjoying the experience (and some did). Camaraderie was uppermost in propaganda ‘snapshots’ of life on the front line; the experience and excitement of ‘in it together’ was the underlying message.

America was initially reluctant to join the war, and so in 1917 there was a recruitment drive backed by posters to instil in Americans that their duty as such a powerful nation was to back the war effort and defend those that needed their help. 'Wake up America! Civilization calls!', 1917 calls on every man, woman and child to fight for liberty.

‘I’ll go too! – The real Irish spirit’, 1915, a play on words relating to the Irish characteristic of friendliness and camaraderie, sums up the intention of propaganda promotions, to  make non-enlisters feel they were missing out if they did not join up. Focused on Irish temperament and nationality, it and summed up what the PRC aimed for, to promote life in the armed forces as an adventure that all men wanted to experience. 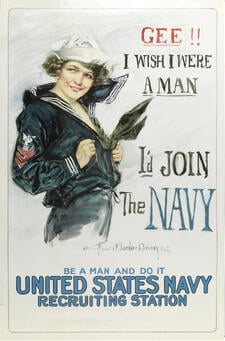 Recruitment propaganda targeted community groups. The formation of the ‘Pals’ battalions, a project to enlist men from local communities was intended to tap into ready-made groups of camaraderie amongst recruits. Professional and social groups were targeted, such as doctors, surgeons, dentists, accountants; members of working mens’ institutes; union members; athletes from rugby, football, cycling and athletics clubs and more, enlisted together to create local ‘football’ battalions or ‘rugby’ or ‘cycling’ battalions. Posters were aimed directly at them.

Posters aimed at recruitment were particularly crucial during the early years of the war, when enlistment was still voluntary; however these were by no means the only messages WW1 posters aimed to convey – and in later posts we'll take a look at some of those other themes.