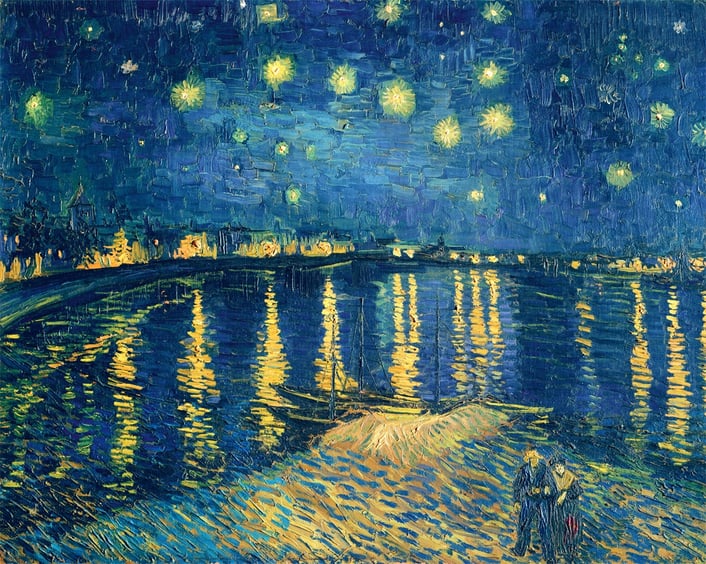 Painted in 1888, Starry Night Over the Rhone is the view Van Gogh had from a rented apartment in Place Lamartine. This painting is different from its counterpart, starting with the emotion of the landscape. In a much happier, pre-committed mental state, Van Gogh’s cheerfulness is much more apparent in this image. In a letter to his friend Eugene Boch shortly after completion, Van Gogh describes the painting: ‘The starry sky painted by night, actually under a gas jet. The sky is aquamarine, the water is royal blue, the ground is mauve. The town is blue and purple. The gas is yellow and the reflections are russet gold descending down to green-bronze. On the aquamarine field of the sky the Great Bear is a sparkling green and pink, whose discreet paleness contrasts with the brutal gold of the gas. Two colourful figurines of lovers in the foreground.’

Van Gogh’s famous swirling brushstroke and heavy black outlines emerged in his later works, accompanied by globs of thick paint that create a textured, tactile painting verging on the edge of relief sculpture. With his twisting brushstrokes he created a graceful flow in which swirls of colour seemed to float within the canvas. Even his juxtaposition of colour seemed more complimentary; for instance, he replaced his usual bold primary colours with softer pastels or similar shades of blues, grey and olive-green.

He endeavoured to capture the expressiveness of nature. So dedicated was he to the genre of landscape painting that even when he was confined indoors during various periods of convalescence, he would paint the view from his window. Though he painted many outdoor scenes in Paris, both cityscapes and suburban vistas, Van Gogh’s relocation to the South of France in 1888 enabled him to take full advantage of a location where he could experience the changes of the seasons, witness spring in bloom and experiment with depictions of the changing effects of light and colour.

During his Parisian phase, Van Gogh not only experimented with a lighter palette, but he also began to explore the use of vibrant, saturated colour as inspired by the many Japanese prints that he and Theo collected. Japanese prints emphasized flat geometric forms, vibrant colour combinations and asymmetrical compositions, which attracted Van Gogh immensely. He was enthralled most of all by the use of pure, saturated colour and the juxtaposition of vibrant colour planes within the picture frame. It enabled him to realize the power that colour has to evoke emotional responses.

Enthusiastic about his endeavours in Arles he wrote, ‘I feel that in these surroundings there is everything one needs to do good work. So, it will be my own fault if I don’t succeed.’ 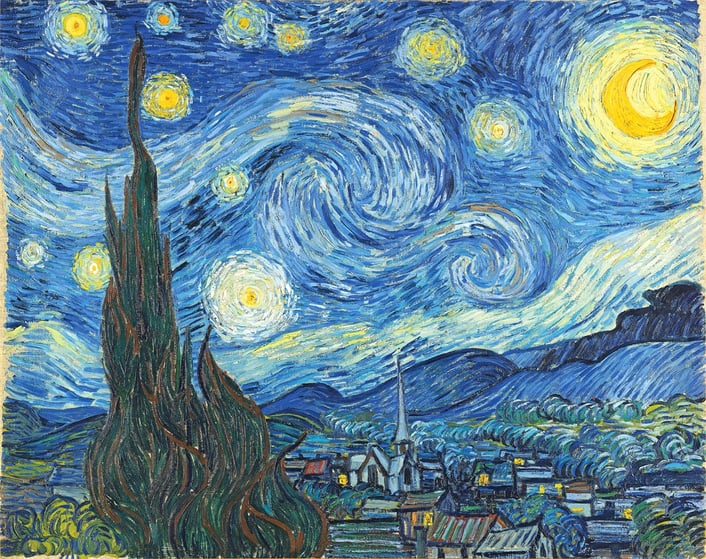 Painted from the memory of the night view from his window in his sanatorium room at Saint-Rémy-de-Provence, ‘The Starry Night’ marks a departure from his earlier frank view to a more imaginative depiction. Expressing both Van Gogh’s anxieties and religious feelings, a solitary, dark cypress tree rises above a village with a tall church steeple. Clouds, stars and a bright crescent moon swirl across the seemingly omnipotent night sky.

In no other painting is Van Gogh’s swirling brushstroke more evident than in this painting, which has been described as a field of rolling energy. Depicted is a quiet village under a midnight-blue sky speckled with bright, radiating stars. The effect is almost fantastical. In a letter to Theo describing the painting, Van Gogh wrote, ‘Looking at the stars always makes me dream.... Why, I ask myself, shouldn’t the shining dots of the sky be as accessible as the black dots on the map of France? Just as we take the train to get to Tarascon or Rouen, we take death to reach a star.’

He acknowledged his departure from representing nature in a subjective way to expressing ‘exaggerations from the point of view of arrangement, their lines warped as in old wood’. The lines to which he is referring are what give the painting movement. The only interruption to this movement is the silhouetted cypress tree that intersects the painting, an allusion to death which intersects life, revealing the artist’s preoccupation with thoughts of the afterlife.

The Origins of Starry Nights

While both ‘Starry Nights’ are impressive and full of emotion, Van Gogh’s preoccupation with the night sky began before he painted either works. In ‘The Café Terrace on the Place du Forum, Arles, at Night,’ he painted in the top corner the night sky, beginning his journey of development that would later result in both other works.

In September 1888, after spending August painting sunlit fields, Van Gogh painted this and described it in a letter: ‘the terrace of a café at night, lit up by a big gas lantern, with a patch of blue star-filled sky’. The bold colours contrast yet complement each other, the forms have been flattened, and there is a lack of shadowing, characteristic of the Japanese print. The objects are slightly and purposely tilted towards the viewer’s gaze. Thus, the choice to forgo accurate perspective is deliberate. Interestingly, Van Gogh’s colour choices, which are on the warm side, are also carefully picked in order to evoke feelings of restfulness.

Artworks featured in this article (in order of appearance):