Charles Rennie Mackintosh and Looking Towards the Future 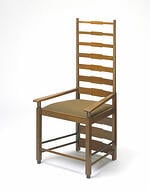 Charles Rennie Mackintosh was an artist in the 19th century. More than this, he was a multi-talented artist-craftsman: painter, architect, furniture designer; the list goes on and on. His art was incredibly influential, and a lot of the motifs, patterns and principles of his work are still popular with today's audience and artists.

An exhibition in Russia that opened recently, called 'British Design: From William Morris to the Digital Revolution', explores the connections between 19th and 21st century art and the technological advances that have been made between then and now. Some of Mackintosh’s work, specifically, one of his chairs, can be seen among pieces such as Zaha Hadid’s 'cosmic shoes', in which the wearer’s feet hover about 16 centimetres off of the ground.

Looking at the Old

Along with a few of Mackintosh’s pieces, William Morris’s work features heavily, representing the 19th century. Aptly for this exhibition, Morris wanted to look back to using traditional artisan production methods while using more modern technology to mass produce his work.

Some of Christopher Dresser’s work is also on display, and he believed that nature was a great source of inspiration. He and Mackintosh built the foundations of modernism by using plain geometric forms to create functional aesthetics, but all three of these artists worked extensively in a multitude of different mediums. They are all masters of design.

Although they're not in this exhibition, all of Mackintosh's chairs showcase the idea of using basic geometric shapes to create functional forms. Specifically, the chair that he designed for the luncheon room for the Argyle Street Tea Rooms, is an amalgamation of rectilinear and curvilinear forms to create a functioning chair.

Some of Mackintosh's chairs featured in our Masterpieces of Art book

Most, if not all, of the 19th century work shown in the exhibition looks just as modern as the 21st century work that’s on display. Due to the various technological advances that happened in the 20th century, many of the ideas that can be seen in the 19th century pieces were expanded on in ways that the original artists never could have thought of.

3D printing, for instance, wasn’t even invented until the 21st century, and in this exhibition, a 3D printed collar by Daniel Widrig sits proudly next to Dresser’s silver egg boiler from 1878, and neither looks out of place. 'British Design: From William Morris to the Digital Revolution' invites us to take a look at the past, the present and the future of art and our society. It shows how some modern artists can be classified as 'digital craftsmen', not just artists. Exhibit curator Alyona Sokolnikova says, 'Just like the designers of the past, someone with a vision of the interaction between form and function can apply this knowledge in different areas, and there is once again the dilution of the borders between design and science, design and arts.'

Recently here at Flame Tree, we’ve converted some of our Masterpieces of Art books for the iTunes store. Don’t worry, we’re not going to stop printing physical books any time soon, but we wanted to make sure that our iBooks looked as good as possible and were easy to use.

One of these converted art books focuses on Charles Rennie Mackintosh’s work and the craftsmanship behind it, and all of the work that is included in this book is shown as it never has been before in this format. The highest resolution images possible have been used so that if you choose to zoom in, you won’t miss any detail or any small bit of work that went into creating the piece pictured. The colours are vibrant and the lighting is just right so that the room or the window or whatever artwork is in the picture is shown to its best advantage.

If you’d like to learn more about our Charles Rennie Mackintosh Masterpieces of Art iBook, click here!