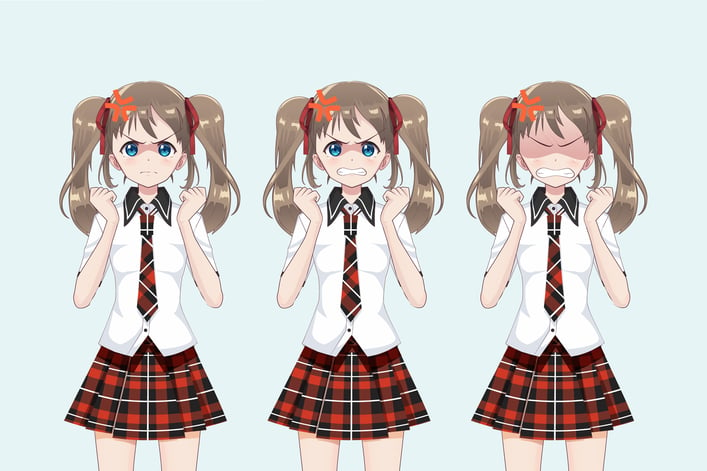 Japan has deep cultural associations with graphic forms of art. From their packaging and advertising to their high art, graphic art in Japan is not considered inherently juvenile like often happens in western culture. In modern times graphic art is not only synonymous with the history of Japan but intrinsic to modern society. With companies, cities and even towns having characters that represent their products and exports, graphic art is as important in Japan today as it has ever been.

A multi-billion dollar industry, manga is an umbrella term for a type of comic or cartoon originating in Japan. Read by people of all ages, manga covers every imaginable story. From classic detective mystery stories and horror to romance and fantasy stories, it crosses all genres often combining several styles and themes in one.

History of the Art Form

While it exploded in the 1950s, the roots of Manga go back much further. Beginning in the late 1700s and early 1800s, manga followed on from the scrolls of the Edo period (in which Woodblock prints had taken off). Manga began to take the form of graphic stories intended to be read right to left but early examples, like the Hokusai Manga books (1814–1834), are also found to be more free form. While still heavily focused on the graphic aspect, the images did not form over arching narratives but instead displayed important everyday scenes and fables of Japanese culture.

This has remained quite important all the way through to modern manga where a single cell on a page works on its own to deliver a message, motion or theme. You can deconstruct a volume, scene or even a page into its cells and you are still left with dynamic images that tell you reams about the characters they contain. Key to this are four design elements that flesh out the sensory experience. Gitaigo and giseigo are the types of symbols used to connote sounds. These are often embedded within the scene and intended to immerse the reader. Fukidashi are the speech bubbles that change depending on the type of dialogue. You can immediately see whether a character is thinking, speaking, shouting or even screaming the words.

The other two key design elements are manpu and tōn. Manpu is the name given to the lines and symbols that connote motion in or across cells, while tōn is the screentone applied to a cell to create a certain atmosphere. These techniques are incredibly intuitive and without any understanding of the language the story is written in, or the content of the story, a person can begin to understand what they are reading. These techniques, along with a rich history, have formed the basis for a bountiful explosion of creativity in Japanese comic art.

A key thing to understand when exploring manga is that while certain genres and subgenres have specific audiences, manga as a whole is read by all. As the themes, styles and genres range so broadly, all ages, genders and social spheres can access manga that interests them. There is also not a social stigma, like in western countries, of comic books being for children or “nerds” as their prevalence is so ubiquitous.

After the initial explosion in popularity in the 1950s, manga publishers began to build two fairly solid genres that they believed were easily marketable; shōnen manga and shōjo manga aimed at boys and girls respectively. Genres and themes within these two classifications still ranged widely but shōnen often features more male protagonists, science fiction and fighting while shōjo manga is often female lead with more romantic storylines. It should be stressed that rather than hugely affecting the style or concretely affecting content, the classifications only really highlight the target demographics. This means that you get Shojo and Shonen stories set in school, fantasy and sport environments but their tone or major themes may differ.

Manga as an Export

With its market still predominantly in Japan, manga is still primarily aimed at Japanese audiences, but over the past few decades its popularity globally has grown.

Manga has had a rather interesting journey to become popular all over the world. Many successful manga have gone on to become anime (animated TV adaptations of manga). These television shows have developed such an immense popularity that in many territories the anime introduces the audience to the style and the manga comes after. Shows like Astro Boy, Dragon Ball and Cowboy Beebop introduced American audiences to the manga style and the comics began to see more and more translations to satisfy this new market.

The diversity in theme and genre has proved popular in many places around the world but nowhere more so than France. In recent years, France has become the second biggest market for manga after Japan. The country has seen a rise in translations with as much as much as 40% of new comics and graphic novels produced in the country being manga.

With huge fandoms and even bigger economic reasons, Japanese comic styles have influenced western comics and media more broadly. Both in the way it has developed the art style and storytelling, you can see the markers of Japanese graphic storytelling more prevalently now than ever. Often this is done with a deep love for the art style and stories but none of this appreciation is justification for travesties like the American made Dragonball film of 2019. The nuance of Japanese graphic art and storytelling is often lost in its crude reimagining in western media but it can also be lost in translation. Many of the jokes in manga are based on the intricacies of the Japanese language and the culture of the country which is often lost of international readers.

Manga shows no signs of slowing in either its interest in Japan or internationally, and the subject matter is only growing wider and more varied. There are now countless books being given manga adaptations from Shakespeare to the Communist Manifesto. Graphic art is not only beautiful to look at but in an increasingly visual world, it has become an excellent teaching tool. Manga teaches us so much about Japanese culture but is also fast helping us to teach people about fictional and political works from around the world. Learn more about Hokusai's masterpiece, The Great Wave, check out this post.