The Beauty of the Magna Carta | Flame Tree Calendars

This year celebrates the 800th anniversary of the sealing of the Magna Carta. As an emblem of freedom and people’s rights, it is an object steeped in significance, with a relevance well beyond its time and place. Describing the document’s birth as a ‘practical solution to a political crisis’, the British Library’s recent exhibition celebrated the historical repercussions since the 13th century document was first sealed. 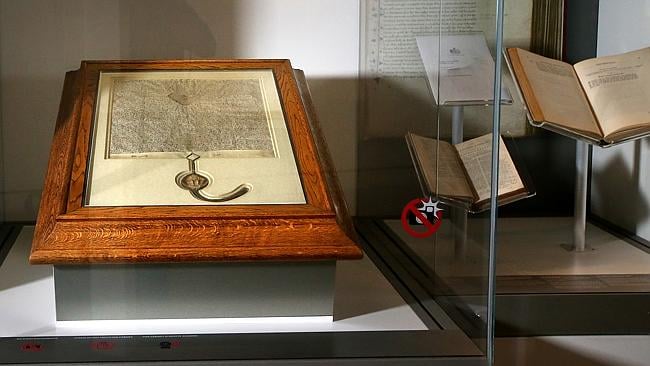 Chief among its impact has been its global significance: the library exhibited artefacts about the Magna Carta alongside original manuscripts of the US declaration of Independence and the Bill of Rights, both of which were formed more than 500 years later. February of this year also saw the four original manuscripts united for the first time. An immensely celebrated object, this powerful document carries a rich history and is symbolic of a pivotal moment in politics. Our 2016 British Library Magna Carta wall calendar features art depicting this event and faithful reproductions of the significant document itself.

Towards the end of King John’s reign in the 13th century, a group of barons – most of them powerful landowners and military leaders – strongly and collectively opposed the king’s additional taxes for the funding of foreign wars. In order to pacify them, King John sealed under oath the Great Charter that would set the foundation of modern government. The monumental event took place at Runnymede on June 15th 1215, though when King John sealed the document he did so with little intention of following through with its declarations, and with no foresight of the importance the document would have politically and culturally in the centuries that followed. That King John did not implement the changes stated in the peace agreement is largely immaterial; the Great Charter still set a precedent in what it proposed and represented. The charter’s contents established a limit to the powers of the monarchy, setting up the potential for discussion, debate, and refute before laws could be passed. It is as such credited as having laid the groundwork for the parliamentary system, elevating the rights of the people for just consideration and requiring consent from officials instead of allowing a monarch to have absolute rule. In this way, it made the king subject to the law, which was a revolutionary idea at the time, which had up to this point taken the king’s word as law.

Each time the charter was issued, a copy was made to give to the relevant parties, so that more than one original copy still survives to this day. The four existing copies, two of which are held at the British Library, indicate how expensively produced they were at the time, some involving gilt lace edging and printed gold letters. The durable parchment was made from sheepskin, and with the text covering just one sheet they are of an impressive size and length. Written in abbreviated Latin using iron gall ink, the charters also bear the imposing coats of arms of the earls and barons of the era. Such tangible and visual evidence from this major historical event helps authenticate the magnitude of the document’s impact. Later editions of the manuscript (often with more ornately decorated lettering) and medieval art also help illustrate its symbolic power through the years as well as the legal reverberations of the document itself. The royal ‘Great Seal’, only one of which remains intact, is perhaps the most eye-catching and thrilling part of the charter as it acted as a signature from the king and granted the document its power and persuasion. The ideas put forth in the Charter remain ever topical, and the strong visual symbol of this 800-year-old ‘signed’ document, which set forth the right to question and even disagree with royal authority, has given the original manuscript an enduring legacy of worldwide significance.

Our 2016 British Library Calendar celebrates the Magna Carta with brightly coloured images of the ornate manuscript, maps depicting the period, and beautiful artwork documenting the event. With detailed captions accompanying each monthly image, this is a must-have for anyone fascinated by what has been dubbed the most important document in history. You can buy it here, or on Amazon here. (If you like beautiful historical documents, take a look at our British Library Illuminated Manuscripts calendar here too!)