The Developing Style of L.S. Lowry | Masterpieces of Art 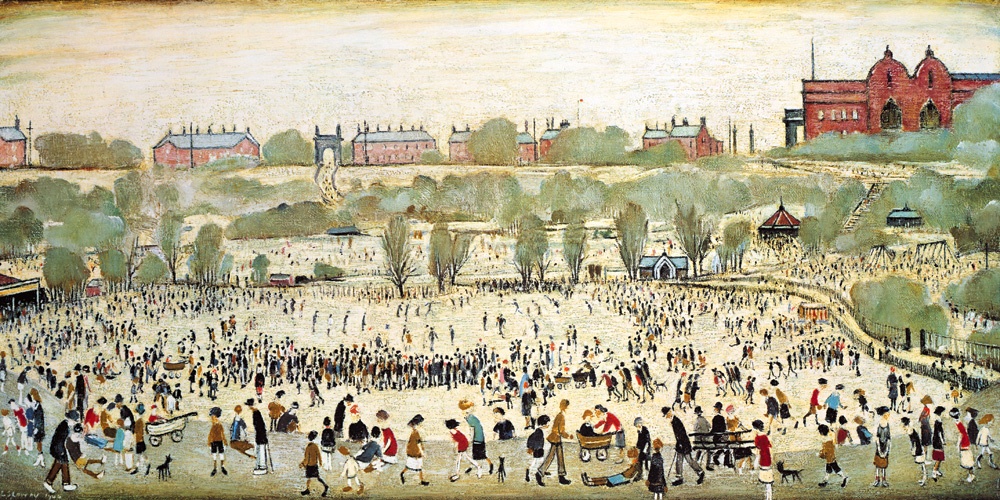 L.S. Lowry is beloved by us for making the industrial scene his own. These works were created in his own unique way, poetic yet not sentimental, compelling, even at times disturbing, but never judgmental. In this blog we’ll take a brief look at how he began to develop his well-known style.

The Foundation of Art

Having only a small income early in his life, the young Lowry first of all took some private lessons with two local artists. By 1905 he had begun studies in the evenings at the College of Art where he drew depictions of plaster-cast statues and where he also worked on figure drawing in the life class. In later life he stressed the importance for artists to have such a foundation for their work, stating, ‘I still believe that long years of drawing the figure is the only thing that matters.’ 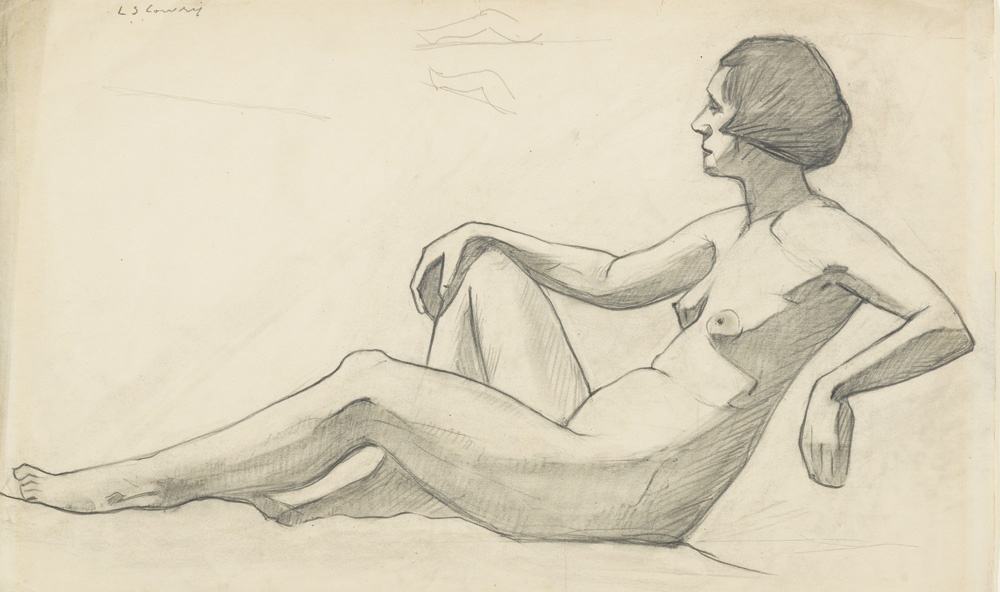 In 1907 Lowry visited the large exhibition of Impressionist paintings in Manchester which included works by Monet, Morisot, Pissarro, Renoir, Degas and Manet. The themes and techniques of the Impressionist painters were clearly very much at the forefront of the thinking of art students in Manchester at that time. According to accounts by fellow students, Valette found it extremely difficult to teach Lowry and eventually let him go his own way while at the same time continuing to encourage and support him. Some of Lowry’s work, however, such as Landscape, c. 1912 – with its blurred effects – does clearly show Valette’s Impressionist influence.

For the most part Lowry painted in oils with a few works in watercolours. From early on, he had chosen to work in just five colours: ochre, blue, black, white and red. For a large part of his career when living at home with his parents he would paint at night in the attic, relying on artificial light, so this may have affected his colour palette. He frequently used a variety of tools to create effects: a pallete knife, his fingers, even his nails to scrape the paint surface, or he would simply rub away areas to create a range of tonal effects. He would cover the board or canvas in white, leave it for a week or so and then sketch outlines in pencil or charcoal.

For his drawings he would mostly use a soft pencil, varying the depths of tone by using his finger or the ball of his thumb to rub and smear the surface and also a rubber to lighten areas. In later years Lowry would sometimes use a ballpoint pen or felt tip. Some early drawings were made in pastels and crayons which lightened the palette considerably and were used to good effect, particularly in his seascapes. This is seen for example in Yachts, 1920, where the hazy sea imbued with impressionistic-style boats evokes a calm restfulness. 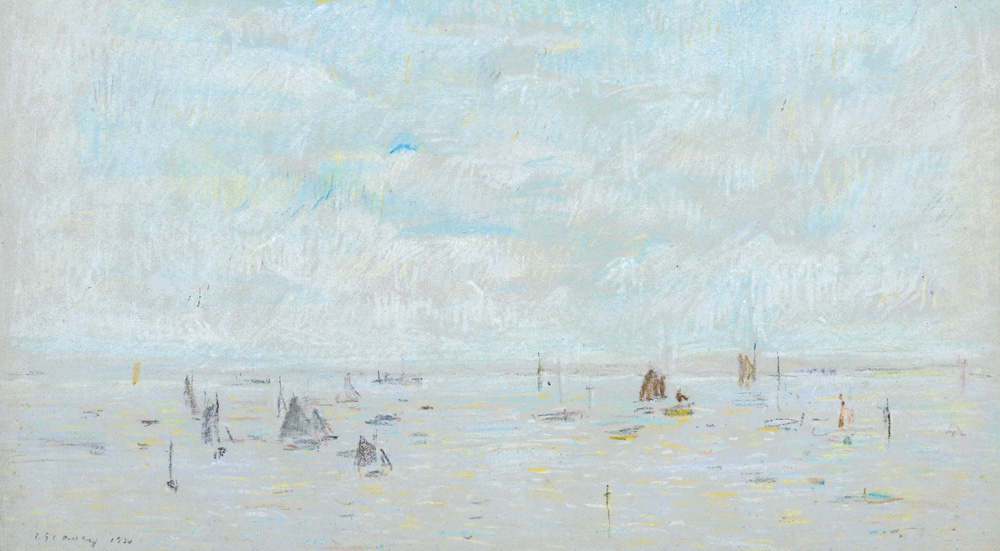 A Vision in White

According to interviews Lowry gave in later life, he hated Pendlebury at first but gradually his vision for basing his paintings on the area developed. ‘At first I disliked it intensely … then after a year or two I got used to it and then interested in it and then, I got obsessed by it and practically did nothing else for 25 or 30 years.’

In 1912 he saw the play Hindle Wakes, a hard-hitting story of the relationship between a mill owner’s family and working-class people. Lowry was very struck by this work and recalled this to be the first time he saw beauty in the industrial surroundings of the mill towns.

One of Lowry’s tutors at Salford School of Art, who was also an art critic for the Manchester Guardian, was Bernard D. Taylor, one of the early people to recognize Lowry’s originality and potential. Lowry showed him some of the pieces he had been working on. Taylor apparently claimed: ‘This will never do’ as he held up the works against a dark background to show that the works were too indistinct. Lowry was very annoyed and returned home, producing two pictures of dark figures on a totally white background. He took them back to Taylor and was taken aback by Taylor’s reaction: ‘That’s what I meant. That’s right. That’s perfectly right.’ Lowry was initially furious but realized eventually that in fact Taylor was right. The use of the white made the figures stand out, with the lighter background throwing the figures into relief so that everything did not just merge together.

A great example of this is the famous (and very typical of Lowry) image Coming from the Mill, 1930. Based on his earlier work of c. 1917–18, this shows a marked contrast in style, the main change being the use of the white background. 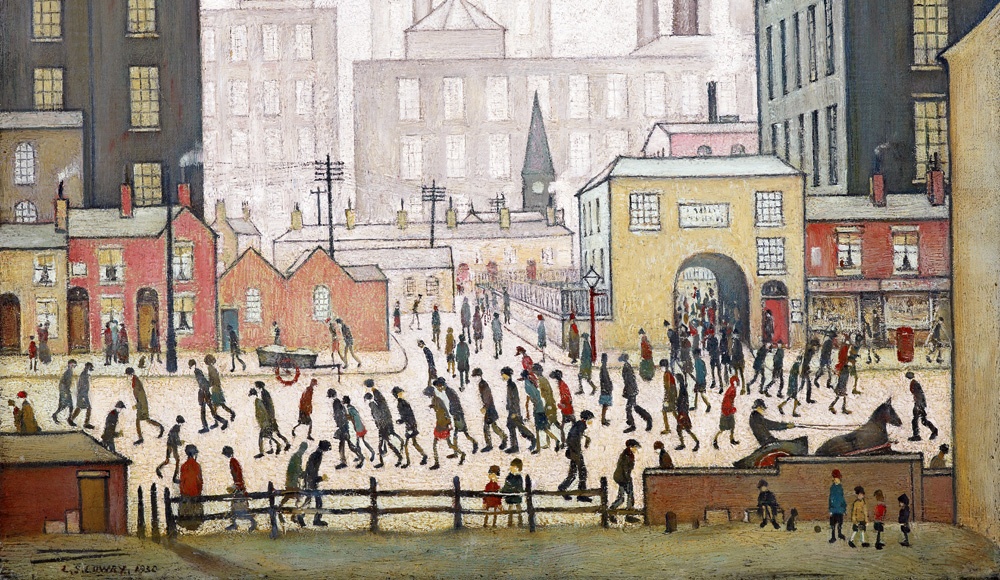 And He Painted Matchstalk Men…

Lowry’s industrial scenes are frequently full of crowds; they show figures going here and there often leaning forward with heads down, bracing themselves against the wind and the elements or simply moving onwards with a determination to get to their destination. The characteristic figures which he developed are dark, thin and elongated, almost silhouettes. They have been given the name ‘matchstick men’ by a critic, a term which Lowry disliked but one which caught the public imagination and clearly sums up for many people the image of Lowry figures. These are undoubtedly the enduring vision people have of Lowry's artwork.

If you want to see more of Lowry's amazing artwork, our newly released L.S. Lowry: Masterpieces of Art showcases a great array of his styles – from desolate landscapes to industrial scenes teeming with figures, from pastel seascapes to intricately shaded drawings. Take a closer look at the title by clicking here. We also have a 2016 Lowry art calendar, diary; and a fantastic foiled journal coming soon featuring Coming from the Mill, 1930 on its cover.