Gustav Klimt (1862–1918) is renowned as a quintessential artist of the Art Nouveau movement, but he was one of a number of Viennese artists who strove to break free of the constraints of the late 19th century academic art establishment.

Klimt’s work is typical of the profound historical and ideological changes that were taking place at the end of the century, although his output was atypical in terms of style and effect.

Klimt had an aesthetic ideology and understood why art needed to explore deeply into emotion and existentialism and break free of all contemporary conventions in order to do so. He achieved this by creating extraordinarily decorative murals and paintings, often lavishly coated in gold.

Klimt’s father was a gold and silver engraver, a labour that doubtless had some effect on Klimt who later decorated his work with these precious metals. The family lived in a Viennese suburb and Klimt received a formal education in art at the Vienna School of Decorative Arts, specializing in murals. Klimt’s talents were immediately spotted and he received commissions while still at college. He decorated two public buildings in Vienna: the Burgtheater and the Kunsthistorisches Museum, working in collaboration with his brother and a friend. By the age of 30 Klimt was a renowned and successful artist.

In 1893 Klimt received a commission to paint murals for a new university building. The ceiling paintings received some criticism from the rationalist, traditional quarters, for Klimt was beginning his experimental phase of art with intensive, creative energy. Three more commissions from the university caused uproar when they were unveiled (they were later destroyed by the Nazis). Packed with sensuality, and Symbolist and Aesthetic ideology, Klimt’s art could only find favour with those who understood his profound and challenging vision.

Klimt’s most experimental work dealt with the themes of the subconscious, impulses and desires, and they aroused high feelings amongst the public and art critics. Nevertheless he received commissions for the University of Vienna and the Palais Stoclet in Brussels.

Possibly his most famous work, The Kiss (1907–08) achieves a balance between emotion and ornamentation. The lovers are encased in an embrace of golden fabric. The man is decorated in the cold colours and geometrical angular patterns that symbolize masculinity; the kneeling female is represented in warm colours by swirls and circles, the symbols of femininity. Together they create a harmonious whole.

When Klimt and his colleagues formed the Austrian Secession in 1897 (see below) they were announcing a formal separation from the traditional, academic art in favour of highly decorative styles. This aesthetic conformed to the European-wide Art Nouveau movement, which sought unity in the applied arts. The development of Secessionism reflected a profound historical and ideological revolution that characterized the fin-de-siècle. In Vienna, Sigmund Freud’s (1856–1939) analytical methods of exploring the subconscious were topical and Klimt’s intensely experimental, controversial work explored the subconscious and emotional impulses and desires. Klimt’s extraordinary creative energy, expressive use of line and dominant use of ornament captured the avant-garde spirit that helped develop the abstract aesthetic that followed.

In Vienna, artists who sought to distance themselves from historicism and tradition formed an avant-garde, experimental group called the Secession, the Viennese interpretation of the Art Nouveau. Klimt led this organization from 1897 until 1905.

Viennese artists were disillusioned with their city’s resistance towards the emerging art movements in Europe in the 1890s. Their response to this intransigence was to distance themselves, or secede, from the traditional view of the Künstlerhausggenossenschaft – or Künstlerhaus – a body that dictated which works of art would be exhibited in the city. The Viennese Secession was established in 1897 under the leadership of Klimt who believed that the Künstlerhaus was commercially motivated to show only Austrian work and that this had led to cultural stagnation.

By exhibiting contemporary foreign work, members of the Secession hoped to inspire other Viennese artists and crafts workers, as well as to enlighten the viewing public. They produced their own magazine of the Secession, Ver Sacrum, which was also displayed as part of their exhibitions; the cover of the first edition was designed by Alfred Roller (1864–1935). The magazine was published from 1898 until 1903. 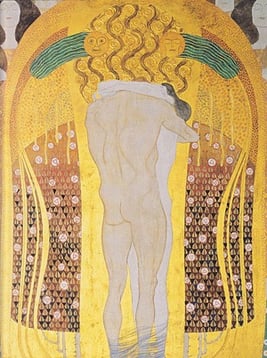 The Secession House was planned, by founding members of the Viennese Secession, to be a place where modern art and crafts could be displayed. This was a very public statement of opposition to the traditional and conservative leaders of the contemporary Viennese art scene, who refused to exhibit the new foreign art to protect the commercial interests of home-grown artists and artisans. As a result of this intransigence, Viennese art had stagnated.

When first performed in Dresden in 1846, Richard Wagner’s interpretations of Beethoven’s Ninth Symphony caused uproar. It was an appropriate theme for the exhibition staged by the Association of Austrian Artists of the Fine Arts Secession, for which the Beethoven Frieze was designed. This mural created by Klimt is widely regarded as one of the most important contributions to the Art Nouveau/Secessionist movement.

The 1902 exhibition, organized by Josef Hoffmann (1870–1956), took place in the Secession building in Vienna, and aimed to create an entire artistic concept in tribute to the works of Beethoven. A large statue of the composer formed a centrepiece and the work of 21 Secession artists created a harmonized display. Klimt’s frieze covered three walls. By an expressive use of line, monumental isolation of human figures and complex, dominating ornament and Symbolism, Klimt told a story of despair, evil and eventual happiness. The final scene shows how only art can bring true joy and peace, leading to paradise, where a man and woman embrace as a heavenly choir sings.

The building of the Palais Stoclet was commissioned by Adolphe Stoclet (1871–1949), a Belgian millionaire, without any financial constraints. The result, designed by Josef Hoffmann and built in Brussels, was an extraordinarily successful collaboration between patron, architect and a team of artists and decorators from the Wiener Werkstätte (an Austrian alliance of artists and designers that evolved from the Viennese Secession in 1903).

The house was an unsurpassed example of the integration of the applied arts: decoration, architecture and furniture were designed to create a unified beauty, using skilled craftsmen and quality materials. Klimt was asked to decorate the dining room, which he created in mosaic. The designs were amongst his greatest; by 1902 Klimt’s work was displaying complete maturity. He had left contemporary idiom behind and was exploring how Symbolism and decoration could combine to create a new and universal language. He combined the abstract with curvaceous Art Nouveau lines, which he interplayed with repeating geometric patterns that were to become so popular in the Art Deco movement. 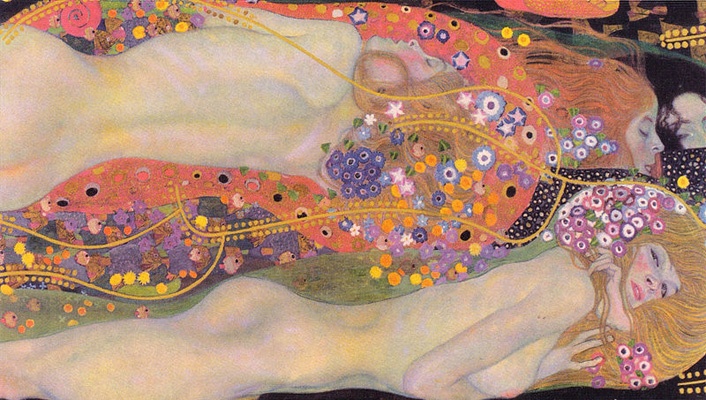 If you’ve enjoyed this foray into the world of Gustav Klimt, you can learn more in our books Gustav Klimt: Art Nouveau & The Vienna Secessionists or Gustav Klimt Masterpieces of Art. We also have a beautiful foiled sketchbook with Klimt’s Tree of Life design on the cover.