Few would dispute Pablo Picasso’s (1881–1973) reputation as one of the pre-eminent artists of the twentieth century. Indeed, the thousands of drawings, paintings, prints, sculptures and ceramics that remain to us are a testament to the sheer scope of his visual imagination and his capacity for artistic innovation – so much so that it seems almost inconceivable that this could be the product of a single individual and a single lifetime. 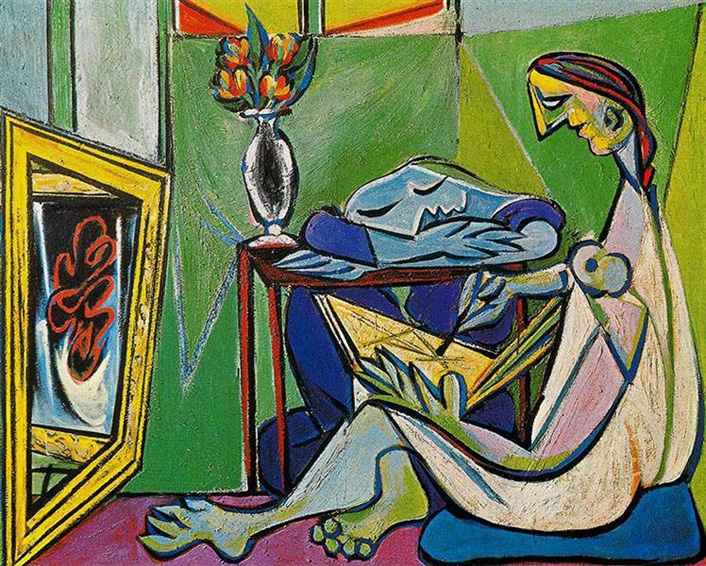 Picasso certainly lived a long and highly active life, and his artistic production spanned the best part of 80 of the 91 years that he walked this earth. Yet, it is not just the volume of his output that matters. More importantly, it is the constantly changing nature of his work, his capacity to express himself and his epoch in a multitude of ever-changing ways that best characterizes Picasso’s remarkable achievement.

Picasso stood at the forefront of the major artistic innovations of the twentieth century. His early forays into Symbolism, seen in his ‘blue’ and ‘rose’ periods of the first decade of the century, forged one of the most compelling visual vocabularies with which to chart the bohemian existence of turn-of-the-century Paris, whilst his amalgamation of the influences of Paul Cézanne (1839–1906) and African masks resulted in an entirely new and exciting means to represent space.

Together with Georges Braque (1882–1963) he was responsible for the invention of Cubism, one of the most radical breaks with art of the past, and yet he was also a leading figure in the return to a more traditional, Neoclassical style in the last years of the First World War. Even here, however, he endowed this traditional approach to painting with a vision uniquely his own. 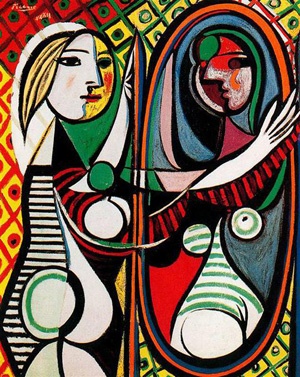 He dabbled in Surrealism in the 1920s and 1930s without ever committing himself to the movement. Nonetheless, his Surrealist-inspired paintings and sculptures remain amongst the most intriguing works of the period and opened the gates for other Surrealists to follow. And when he turned his attention to political subjects, such as the bombing of Guernica during the Spanish Civil War, the occupation of Paris by German troops during the Second World War, or the political tensions inspired by the Cold War, he virtually reinvented the concept of contemporary history painting. Even in his old age, when he started producing works based on Old Master paintings, the sheer formal inventiveness of his art not only resulted in highly creative works, but also enabled us to see afresh what previously had seemed so familiar.

Picasso was also unrestricted in the materials he used. His innovations in painting were matched by his practical reinvention of sculpture in 1912, abandoning the age-old notion of modelling and carving, and introducing construction, the building up of a sculpture from component parts. Moreover, his use of a variety of everyday materials in his two- and three-dimensional works, including old newsprint, wallpaper, broom-handles and even bicycle saddles and toy cars, has transformed the very notion of what constitutes artistic practice.

Throughout his life, Picasso remained an enigmatic figure, an individual constantly reinventing himself as much as his art. In addition to the self-portraits he produced at various stages of his life, he also introduced stock characters such as the harlequin and the minotaur into his works – characters that stood, metaphorically, for the artist himself. Yet the duality of their identity, symbolic of both good and evil, only serves to retain the enigma, never really allowing the viewer any closer to the real Picasso.

The Question of Identity

He also maintained a dual identity as an intensely Spanish artist, yet one who spent the majority of his adult life living in France. Here he was constantly on the move. In Paris he occupied a variety of studios and homes in different parts of the city, and spent most of his summers in the south, on the French Riviera. Even in his old age he lived in an assortment of villas and chateaux dotted throughout the south of France, never fully settling in any of them. 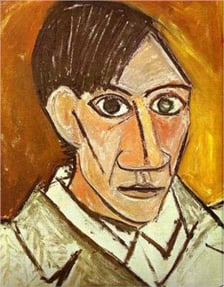 Picasso’s domestic life was also in constant flux, as his relationships with the numerous women in his life grew, faded, collapsed and started over. Yet all of this provided an impetus and a background for the constant changes in his work. Indeed, his entire body of art has often been read as a form of autobiography and, at times, it is easy to link his choice of subject matter and stylistic handling to events in his own life.

Thus the despair evident within his early blue-period works seems inextricably linked to his initial isolation in Paris, whilst the more ordered and harmonious Neoclassical works of 1917–22 coincided with the happiest days of his marriage to the Russian dancer Olga Khokhlova (1891–1955) and the birth of his first child, Paulo. Similarly, the sensual, curvaceous and radiantly coloured forms evident in his portraits of Marie-Thérèse Walter were produced during the early 1930s when Picasso was conducting a secret affair with this young woman, and can be contrasted with the dark, austere and altogether more sinister works he created in Paris during the 1940s, when his relationships with the women in his life were on a less secure footing.

Finally, the colourful, exuberant and joyous forms of his late-1940s Mediterranean scenes were undoubtedly inspired by his newfound happiness, living with the young painter Françoise Gilot and their two children, whilst the more brutally painted late self-portraits, with their anxiety-inducing distortions, thickly encrusted surfaces and muddy tones, were notably executed when Picasso was staring his own mortality directly in the face.

Yet to reduce Picasso’s works simply to these personal influences would be to exclude a number of other crucial factors. Picasso did not live his life in isolation from the major political events of the twentieth century. Indeed, his work very much addresses the wider social and historical events he witnessed and experienced first-hand. The class conflicts and political tensions of turn-of-the-century Barcelona – widely known as a hot-bed of anarchism and revolution – certainly inspired Picasso’s interests in the poor and dispossessed, as well as encouraging him to reject the conventional academic training he had received as a student.

Moreover, many of the technological innovations of the late nineteenth and early twentieth centuries left their mark on the artist. New inventions such as radiotelegraphy and cinema, developments in high-speed travel with the expansion of new motorcars, and new scientific discoveries, such as X-rays, all challenged previous ideas regarding time and space.

As a consequence of this, Picasso’s Cubist innovations were as much a part of a wider social and philosophical exploration of how time and space might be conceived and represented in light of these changing factors.

Picasso also lived through two World Wars, global events that brought death and destruction on a previously unimaginable scale and changed the nature of international relations. Picasso never shied away from the big questions generated by such events, a factor attested to by his famous anti-war icon of 1937, Guernica, and his decision to join the Communist Party in 1944. All these wider social factors inevitably left their mark on Picasso’s work and, indeed, it was his willingness to grapple with the major issues of his epoch that has made his work so complex and so enduring.

Many of Picasso’s works can now be seen in the major museums of the world, from his native Spain and adopted France, to Great Britain, the United States and beyond. International exhibitions are also regularly held, covering all stages of Picasso’s career and all aspects of his work, from his earliest scribbles to his last crayon drawings, from his experiments with fragments of newsprint to his ceramics and monumental sculptures. Few other artists can boast four major museums dedicated solely to their work, yet Paris, Barcelona, Antibes and, most recently, Málaga, are all now home to Picasso Museums.

Picasso’s works have also been widely reproduced in hundreds of books offering a range of differing interpretations of the artist’s work. We are even able to watch the artist at work thanks to a documentary film, The Mystery of Picasso, made in 1955 by the French filmmaker Georges Clouzot (1907–77), and the artist’s life has been dramatized in a 1996 Hollywood feature-film entitled Surviving Picasso, and starring Anthony Hopkins in the title role.

While all this serves to bring us just a little closer to the artist and his work, it can never give us definitive answers. Indeed, it is the endless possibilities of Picasso’s works, their ability to resist simple classification and to open up options for wider interpretation, that draws us back again and again to re-explore their many qualities.

Picasso rarely painted with a preconceived notion of what the end result should be. Rather, as he stated in the mid 1930s, ‘A picture is not thought out and settled beforehand. While it is being done it changes as one’s thoughts change. And when it is finished it still goes on changing, according to the state of mind of whoever is looking at it.’ Picasso’s works will continue to live, to grow, to develop, to go on ‘changing’ as new generations discover, explore and engage with the work of this extraordinary artist. 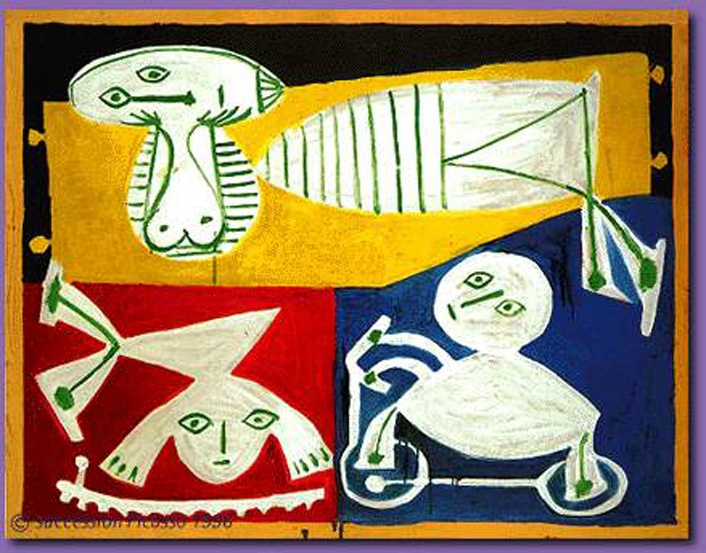 The incredible artist Pablo Picasso paved the way for future artists, co-founding Cubism and Surrealism, he greatly influenced art in the 20th century. To find out more about Picasso and his works, as well as other modern artists who shaped the 20th century, take a look at our beautiful book Origins of Modern Art (ISBN 9781783616107).