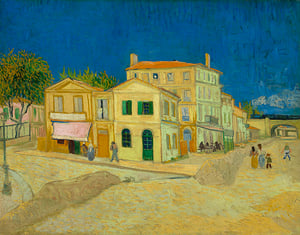 I don’t see the whole future black, but I do see it bristling with difficulties and sometimes I ask myself if they won’t be too much for me. But this is mostly in moments of physical weakness, and last week I had such a fierce toothache that much against my will I had to waste time.

Well, today I’ve taken the right wing of this complex, which contains 4 rooms, pr rather two with closet. It is painted yellow outside, whitewashed inside, in full sunlight. I have taken it for fr. a month.

Now my idea would be to furnish one room, the one on the first floor, so as to be able to sleep there. This [house] will remain the studio and the storehouse for the whole campaign, as long as it lasts in the South, and now I am free of all the innkeepers’ tricks: they’re ruinous and they make me wretched […] I hope I have landed on my feet this time , you know – yellow outside, white inside, with all the sun so that I shall see my canvases in a bright interior – the floor is red brick:; outside, the garden of the square, of which you will find two more drawings. I think I can promise you that the drawings will get better and better.  - Letter to Theo Van Gogh, May 1888

After a tumultuous time in Paris, Vincent felt the need to escape form the busy city life. The city life was hectic but Vincent was also uncomfortable with the sheer amount of artists around him. He sought solitude from this suffocating environment, so that he might better engage with his own creative development.  He took up refuge in Arles, eventually taking up residence in what would come to be known as The Yellow House.

He envisaged the space as a retreat and studio for artists where they could share a creative space without the pressure of Parisian life.  The house and his ideas for it soothed him and we see his optimism in his letters. The future is no longer dark but he recognises that his journey will remain a test of his character. It is clear that he saw the potential good that the studio could do for both him and others. The rural landscape and the closeness to nature was cleansing for Vincent’s soul and he wanted to bring that feeling to others.

Shortly after moving in to The Yellow House, Van Gogh sent a letter to his brother about his work on the studio and the subjects of his work. He also makes mention of who he intends to bring in on the project.

I am very curious to know what Gauguin Plans to do. I hope he’ll be able to come. You will tell me that it’s pointless to think about the future, but the painting is progressing slowly and where that’s concerned you do have to plan ahead.  […] If Gauguin were willing to join us it would be, I think, a step forward for us. It would establish us squarely as the openers-up of the south, and nobody could argue with that. – June 1888 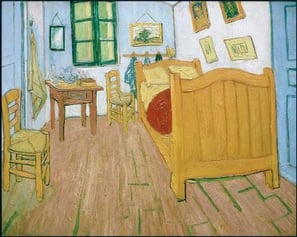 Inspiration Coming out the Walls

A clear focus for Van Gogh in this period was Japanese art. He found a lot of inspiration in Japanese works that he hung up all over The Yellow House. This was not just n their process and final product but also the tone and style of the work he saw. He found that the manner in which they presented the world had a level of clarity that western art was lacking. It was bold, never dull and had a focus on our interaction with nature, as opposed to a feeling of conquering nature.  Van Gogh would often work this influence directly into his work; in some cases due the style, like that of Almond Blossom, and elsewhere literally having these works in the background of portraits or still life, like in the case of Self Portrait with Bandaged ear.

I have arranged all the Japanese prints in the studio, and the Daumiers, and the Delacroixs and the Gericaults. [...] One cannot study Japanese art, it seems to me, without becoming merrier and happier, and we should turn back to nature in spite of our education and our work in a conventional world. I envy the Japanese, thew extreme clarity of everything in their work. It is never dull and it never seems to be done in too much of a hurry. Their work is as simple as breathing, and they do a figure in a few sure strokes as if it were as east as doing up your waistcoat. - Letter to Theo Van Gogh, September 1888

It was several months before Van Gogh would formally invite Gauguin to be an accomplice on his mission to create a haven for artist to escape the busy city life. It i unclear whether he wanted or needed accompaniment, but his request had followed several meandering suggestions.

I must tell you that even while working I think continually about the plan of setting up a studio in which you and I will be permanent residents, but which both of us want to turn into a shelter and refuge for friends, against the times when they find that the struggle is getting too much for them. […] when I left Paris I was in a sorry state, quite ill and almost an alcoholic after driving myself on even while my strength was failing me – and then withdrawing into myself, still bereft of hope! – Letter to Paul Gauguin, October 1888

Gauguin would indeed did go to The Yellow House, but less as a permanent resident and more as a long-term guest. Unfortunately, he did not seem to fully engage with Van Gogh’s more grand idea. This may have been because of Gauguin’s own drives for more exotic locations in less mechanised cultures and societies. The pair had a difficult relationship, which came to a head when Van Gogh threatened Gauguin with a razor blade. It was here that we see Van Gogh cutting off part of his ear in a fit of rage. This extract from before this final straw took place illustrates the brooding tension between the two. There was an uncomfortable air and it seemed unlikely the partnership would last.

I think myself that Gauguin was a little out of sorts with the good town of Arles, the little yellow house we work, and especially with me. As a matter of fact there are bound to be for him as for me further grave difficulties to overcome here.But these difficulties are rather within ourselves than outside.

Altogether I think that he will either definitely go, or else definitely stay.

Before doing anything I told him to think it over and reckon things up again. Gauguin is very powerful, strongly creative, but just because of that he must have eace. Will he find it anywhere if he does not find it here? - December 1888

End of an Ideal

After Gauguin had left, and Vincent had spent some time in the hospital for his ear, he came back to a note telling him that The Yellow House was being passed on. While his ear was healing well, his heart was hurting. His greatest work over the past year had not been any specific painting, but The Yellow House itself.

They have just told me that during my absence the owner of my house here made an arrangement with a fellow who has a tobacco shop to turn me out and give this tobacconist the house.

This has rather upset me, for [..] it was I who had repainted inside out, and had gas put in, etc. - in fact, who had made a habitable a house which had been shut up and uninhabited for a considerable time, and which i took in a very poor condition [...] - Letter to Theo Van Gogh, January 1888

The Yellow House represented another interesting period in Van Gogh's life. It was a time where he was proud of the work he was creating and really felt he was getting much closer to his artistic ideals. He was surrounded by nature but there was also lots of people too. This allowed him to capture the beauty of the natural world while still engaging with the emotional depth that portraits and civilisation could offer. For the most part he was happy and it seems that that was a rare emotion for him to experience for long periods of time. He felt that his mission to create this artistic retreat was good a necessary one, and its clear that his failure to do this affected him. Within several months Van Gogh would find himself in Saint Remy, the asylum that he took refuge in. There is no way to know what may have happened if The Yellow house project had turned out differently.