Masterpieces of Art: The Great Wave

The Great Wave is one of the great masterpieces of art. It has occupied a unique place in the affection of both Western and Eastern Cultures, since its creation in the early 1830s as the first of 36 Views of Mount Fuji, by the master of the Ukiyo-e style, Katsushika Hokusai (1760–1849). Probably the most famous of all Japanese artworks, The Great Wave is a woodblock print, not a painting, and unlike many of its contemporaries it brought strong European influences into a cultural landscape dominated by eternal, East Asian sensibilities.

Hokusai and the 36 views of Mount Fuji

Published in 1832 The 36 Views of Mount Fuji were a mass market phenomenon in Japan. They represented the high point of the Ukiyo-e style which was developed during Japan's 200 year isolation from direct outside influence (from 1660). The Ukiyo-e style flourished particularly in the early years of the 19th century and along with other artists Utamaro and Harunobu, Hokusai enjoyed great popularity. Ukiyo-e had become a print-making art form that represented everyday people and their lives, using simple but effective symbols of Japanese culture. Hokusai's series had been commissioned by the publisher Nishimuraya Yohachi who released thousands of prints into an eager market, initially in Edo (now Tokyo).

The specific techniques of The Great Wave contributed to its success, as much as the subject and its composition did. Hokusai created the series of images in a small watercolour book (39 x 26 cm /15 x 10 in) and then worked closely with the skilled craftsmen to create the blocks for each separate colour. Ink was applied to the block (made from dense and resilient cherry wood), then pressed onto the paper in a laborious, but effective process, creating vivid prints hand-pulled in their thousands by the printer, and sold. The woodblock print process had been known for many years and along with engraving was the primary method of making multiple copies of an artwork. William Morris, and other arts and crafts artists in Europe and America, such as Lindsay Butterfield and Charles Voysey, worked in much the same way, creating wallpapers and textiles in the latter part of the 19th century.

In each of the 36 Views of Mount Fuji Hokusai used a new ink colour, Prussian Blue, employed so successfully in The Great Wave. Sometimes called Berlin or Parisian Blue it had recently become available, from Europe, through China, in a relatively inexpensive form. A powerful colour, with strong painterly qualities, it did not fade quickly and was perfect for the art of print making. Hokusai made great use of the colour and it brought a fresh and lively feel to his art, significantly contributing to the popularity of the series. 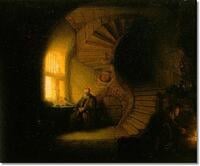 Hokusai's work on the Mount Fuji prints was heavily influenced by European ideas on perspective, tension and colour. He had studied prints by Rembrandt and other Dutch masters, and introduced his own versions of their sublime perfection. Previously in Japanese art Mount Fuji, the eternal mountain, the embodiment of the everlasting and serene Japan, had always been placed in the centre of the paitning, but Hokusai managed to highlight the sacred symbol by placing it off-centre or far into the distant perspective, emphasising it by echoing its shapes in the roll of the waves, the bending of reeds or the flight paths of cranes. He relied on the understanding of his audience that the very presence of Mount Fuji was enough to demonstrate due reverence, while surrounding it with images of everyday life and work, creating a natural tension between the ephemeral and the eternal.

Part of the excitement of the Mount Fuji series was that Hokusai explored the everyday in original and unusual ways, placing it in the foreground, focusing on its immediacy and temporality; whereas the distant Mount Fuji was able to retain a constant, detached presence. In The Great Wave we see the tumultuous lives of the fishermen, who remain calm in the face of the powerful waves. Japan, being an island nation, was dependent on the sea for its food and local trade so such danger was commonplace, a daily occurrence based on necessity. This tension between the revealed might of nature and the everyday was a theme that Hokusai had explored in his studies of European art, and brought it to bear on The Great Wave and the other views of Mount Fuji, as he sought to capture of the nature of things and the manifestation of Yin and Yang, the philosophical concepts of balance that still permeate so much of Asian culture . 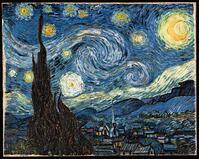 At the time of original publication Japan was still locked within its self-imposed exile, so there was only limited trade between local East Asian countries. However, the 1867 World Fair in Paris brought the artworks of the Ukiyo-e printmakers to Paris and they had a profound effect on a generation of Western artists, with the prints finding their way into the living rooms and studios of the artistic community and their wealthy benefectors. The glimpses of everyday life resonated with the approach of the Impressionists, the Pre-Raphaelites, and Post-impressionists, all of whom rejected the neo-classicism of their forebears and strove to evoke the light and life of the world around them, celebrating the pleasures of walking, fishing, going to the theatre, the ballet, the parks and the countryside.

In the prints of Ukiyo-e and the art of those Europeans so influenced by them the scenes are two dimensional; we are onlookers being presented with another life, asked to look passively and enjoy the effects, unlike the Modernism of the 20th century which found every way possible to draw its audience into its creative maelstrom, to interpret and participate in the art itself (Duchamp, Picasso, Miro, Rothko). For the 19th century lover of art, it was revolution enough to breath the air of the everyday world.

Hokusai, originally influenced by European art, would have been so proud to see the style and sensibility of his work absorbed and spread across the palette of French, British, German, Dutch and American art in the late 19th century, decades after his death as a revered but impoverished 89 year old. He was a great teacher and although the Ukiyo-e had long passed in Japan the ripples of its themes and methods were felt across the studios and galleries of Europe. Manet, Cassatt, Gauguin, Monet and Van Gogh acknowledged his influence, with the latter owning prints of The Great Wave itself, as Japonaiserie swept through art, music and poetry. In Van Gogh's Starry Night we can see the heavy Prussian Blue stokes and rolling, wave-like clouds, in Monet's Wave Breaking the viewer is placed in the path of a wave, rather than looking from the side, with typically impressionistic strokes invoking the sense of threat from Hokusai's original work.

The Impressionists in particular offered a sympathetic echo of Hokusai's work, with the subtle changes of light on water and rustling leaves in the sun, painted over and over again, attempting to capture the changing effects of light on the immediate landscape, offering different views of the same scene, a truly Ukiyo-e way of thinking.

At the turn of the century (the Fin de Si‪è‬cle), Hokusai's work was echoed by members of the Arts and Crafts movements in America and Europe and the vivid two dimensional illustrations of the Art Nouveau period, with Alphonse Mucha, Toulouse-Lautrec and Jules Chéret painting free-flowing, fluid lines, beautiful women and the everyday pleasures of the threatre, music and life, with blocks of colour presenting their viewer with scenes of immediate exhilaration.

Japonaiserie reached beyond art into music (Debussy's La Mer) and poetry (Ezra Pound's economical, enigmatic 'Cantos'), and even now it can be seen in Hayao Miyazaki's delicate lively anime films which offer a surface of everyday life that is subverted by nature and unusual juxtapositions of creatures and places, wood spirits and children, babies, floating effortlessly through raging seas (see Ponyo, left).

The Great Wave is still one of the most popular designs on products, books, calendars and other merchandise. It can be found as living art on street walls in our cities (Georgetown in Australia, left). It's a reach that Hokusai would have recognised, mirroring the mass market of his own lifetime, and influencing the themes and techniques of so much of modern popular illustration.

FLAME TREE publishes books, art calendars, iPhone cases and gorgeous foiled journals with Hokusai's Great Wave on the covers. In the form of an artistic statement we are happy to admit that we're committed to creating beautiful objects, which are useful both as gifts and as carefully curated references of information and entertainment. We love the art that surrounds us and work very hard to recreate the colour, craftsmanship and spirit of the original creators whose memory we actively celebrate in our methods and publications.