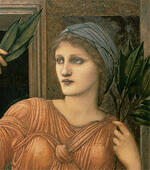 The Pre-Raphaelites were a group of British artists and writers, founded in 1848 by Dante Gabriel Rossetti, John Everett Millais and William Holman Hunt. These three were later joined by James Collinson, Thomas Woolner, Frederic George Stephens and William Michael Rossetti to form the seven-member fraternity.

The group's goal was to rehabilitate art and poetry by rejecting what it considered the purely deterministic approach first adopted by Mannerist artists who followed Renaissance artists Raphael, Bernini and Michelangelo. The Pre-Raphaelites thought that the Classical poses and delicate pieces by Raphael in particular had a disturbing influence on the academic teaching of art, hence their group name. The brotherhood wanted to return to the vivid colours, bountiful detail and intricate compositions of Italian art from the late Middle Ages and early Renaissance. The group accepted the concepts of history painting and imitation of nature as central to the purpose of art. The Pre-Raphaelites defined themselves as a reform movement, and it’s obvious that they’ve created a distinct name for their form of art.

Painted by William Holman Hunt in 1851, this painting in the gallery’s collection is a quintessential example of a Pre-Raphaelite artwork. It depicts a shepherd and a shepherdess flirting instead of doing their jobs and tending to the sheep that are running off behind them. The woman is leaning back on her right arm, and the man is leaning forward and looping his arm around her shoulders. She is leaning back into his space and he is coming forward so that he can show her the death’s head moth that’s in his hand.

While this seems inconspicuous enough, the shepherd is letting his affections take over, and some of the sheep in his flock have died because of his tomfoolery. The lamb in the girl’s lap is about to consume an apple, which should not naturally be in its diet. Hunt is using this piece to offer critiques on the general moral and religious views at the time.

This beautiful piece from the collection was painted by Dante Gabriel Rossetti, and while it doesn’t apparently make any comments on morality or religion, it still is a very interesting painting. The tension that’s created between the women by Rossetti’s decision to not only have all of the figures be women, but to have them all facing away from each other keeps the viewer interested and creates a sense of suspense in the scene. Doing something as simple as having the two women in the foreground sitting face-to-face but avoiding each other’s gaze and then to have the two dancers in the back leaning in opposite directions to each other and the women in the front creates the dynamic visual interest that Pre-Raphaelite paintings are known for. 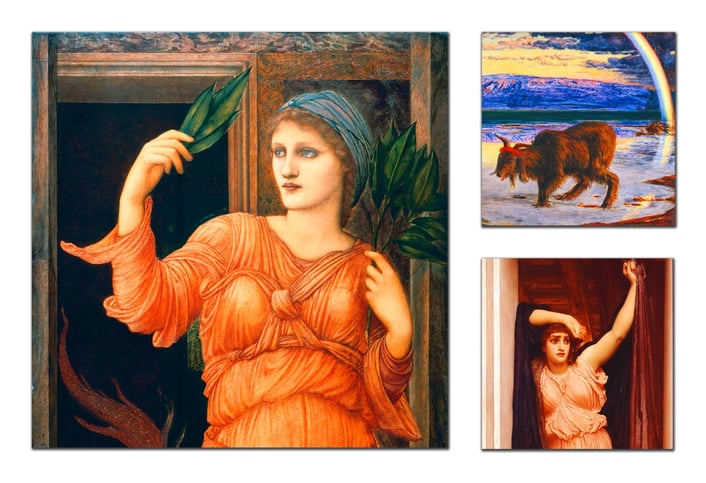 If you’d like to view some Pre-Raphaelite pieces in your home, we have a 2015 calendar displaying 12 pieces from the Manchester Art Gallery’s collection! Check it out on our website here.