Comics as a medium is a rather catch all term and to be honest it would probably include Manga. Even “western comics” might be a touch too generic as European and American comic book styles have followed rather different trajectories. To keep it succinct we are looking mostly at the development of superhero comics that came out of America.

The first superhero comics didn’t look like we think of them now. Growing in popularity through the 1920s and 1930s, characters like Pop-Eye formed the basis of what people would come to see as archetypal superhero comics. Gaining strength from spinach became his power and in a similar way to the later titan of comics, Batman, Pop-Eye was also an excellent detective. This multi layered hero would set the standard for what would follow.

In the late 1930s we would see the introduction of the first icon of the genre; Superman, which is now considered the beginning of the Golden Age of Comics. This period saw the creation of many of the now household names that make up the comic book roster. Captain America, Hawkeye, Wonder Woman, Aquaman, Batman and Robin were all born in the Golden Age of comics. It was a time of creativity for graphic art but would also build the basis of some rules that have remained constant all the way through to now.

King among this was the style and aesthetic of the medium itself. When we looked at Manga we talked about the terminology referring to lines that connote types of motion or text bubbles that denote types of speech. Superhero comics developed a similar language of design over time. Some of this was for practical reasons of the era and much of this has now carried over into becoming what we would consider “comic book style“. A good example of this is the typeface most commonly use.

When comics first started they were all hand lettered but to build some consistency into the lettering they used pencil lines. These lines would come to shape the font the letterers employed. To fit within the lines the letters became squat, and to make sure it was always legible (even on poor quality paper), it was also capitalised. Certain artists still had discernible styles but the industry now had a standardised way to letter their books. Vox have done an interesting video going much deeper on the comic book fonts which you can check out here.

A New Generation of Heroes

Comic books, and superhero comics in particular, took a real hit in World War Two but by the sixties publishers were beginning to take risks with their characters again. We saw Spider Man facing off against Doc Oc and The Fantastic Four began their legacy too. During this time reading comics began to be seen as a more juvenile past time. Unlike in Japan, where every strata of society reads comic books, American audiences relegated superheroes, and comics in general, to being something primarily for younger audiences. There were lighter stories for kids and some more complex characters for teens and young adults but this new wave of heroes didn’t take off ubiquitously.

Key to this may have been the marketing and the accompanying TV shows that many heroes had. With characters like Superman and Spider-Man having light hearted, moral driven cartoons aimed at children, and Batman having a rather naff TV show, superheroes didn’t seem cool and comics by association suffered an image issue. Since, these shows have developed renewed interest and a cult following with the Fleischer Superman cartoons now being heralded for their ingenious animation and stunning colouring.

During the 80s and into the 90s comic books and superheroes had a new and very different renaissance. A new generation of artists and writers were given the keys to classic characters and they took them to places they’d never been before.

A new tone of comics started to gain popularity. These new, often dark, comics challenged the conceptions of this bold graphic style and they certainly weren’t just for kids. Artists like Frank Miller, Todd MacFarlane and Jim Lee were producing new art and new stories that featured interesting design and deep characters. Few places can this be seen more than in MacFarlane’s rise at Marvel and his overhaul of the Spiderman design. Spiderman got a fresh look (something he needed after growing stale over 25 years) and a new villain in Venom, now one of his most popular adversaries. These new artists had become like rockstars and people couldn't wait to see what they would write next.

The only people unhappy with the new success of comic books were the executives. In an interview, MacFarlane said:

“When they gave you the book, when it was floundering, they said “here do whatever you want creatively, ‘cause it’s not working.” And then you take it to the top and all of a sudden they want to jump back on as the conductor.” 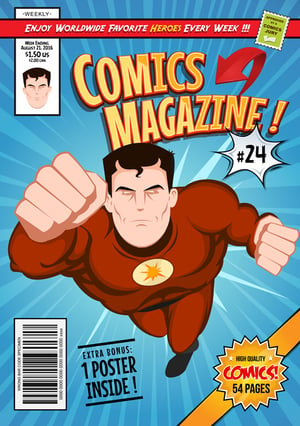 The fear was that now that more people were reading, the stories would be open to more criticism and the people at the top worried about backlash to racier or more challenging comics. The problem was that these artists and their comics were at the top their game and what they were writing, people actually wanted to read. In 1991 Jim Lee, Rob Liefeld and Todd McFarlane walked out on Marvel angry at the constraints they were placing on creativity and the lack of appropriate compensation for their work. Each in turn had set new records for the biggest selling comic books of all time with Lee still holding the record to this day for his first X-Men comic. They felt they deserved a better home and along with other artists and writers they formed Image Comics. This upswing in more independent comic companies didn't just combat industry leaders but gave birth to a thriving independent comic book scene that has produced gems like Spawn, The Walking Dead and Saga.

Another giant development over the past 20 years has been comic book films. Comic book films now make up a quarter of the top 50 highest grossing films of all time. Arguably this actually isn’t having as big of an effect on actual comic books as you might hope or assume. When I mentioned earlier that Jim Lee still has the biggest selling comic book of all time, it sold over 8 million copies. If you compare that to Civil War 2, a comic released in tandem with the MCU (although narratively separate), and a sequel to the first Civil War books, you start to see the difference. The comic did well but in today’s era that means selling just under 400,00 copies. Not to be sniffed at, but a far cry from the heyday experienced by comics in the 90s.

Comic books operate in a very specific sphere of art and creative writing. Keeping a character moving and developing for decades, and finding ways to constantly reinvent heroes and villains so as not to get stale (in both content and design) is hard. Writing stories that intrigue people with art that stunning to look at is often a team effort and it’s sad that they are too often relegated as being juvenile. Not every comic is art and to be perfectly honest, they often don’t try to be, but occasionally a gem stands out and defines an era. Next time your thinking of what book to read next, maybe pick up a comic book and see if it’s something you didn’t realise you’d enjoy.