Monet & The Garden of Giverny | Art of Fine Gifts 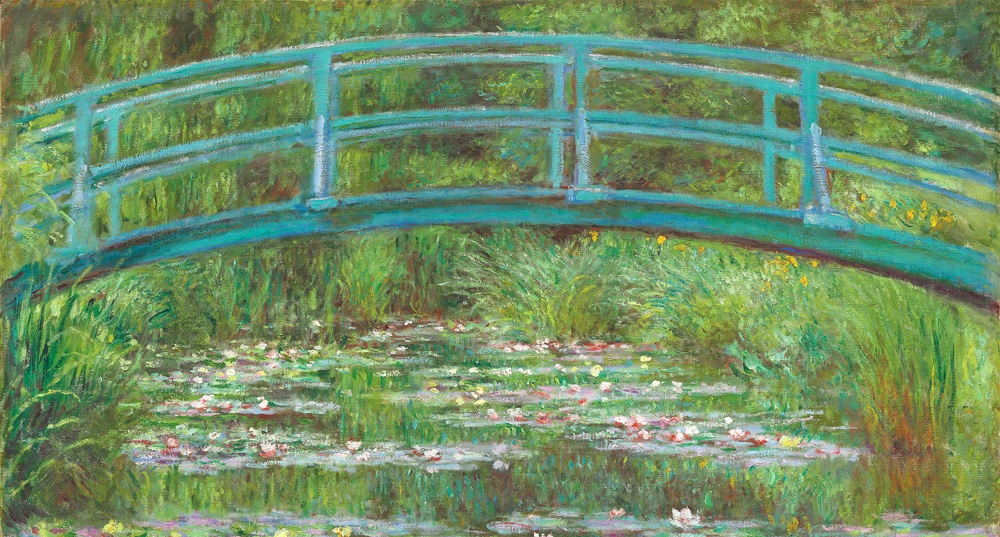 Some of Monet's most famous paintings are his depictions of sights seen in the idyllic landscapes of his Garden of Giverny. His incredibly popular Water Lilies artworks, and the iconic view of the Japanese Bridge were all painted from views of his garden – adorned with poppies, dahlias and irises – where he lived out his final years.

Monet first saw the village of Giverny from the window of a train in the spring of 1883. There he found a large, rambling farmhouse to rent in two acres of land, with a walled garden and a broad walk lined with cypress trees and spruce. Giverny sat between the valley of the Seine and hills blanketed with vineyards and orchards. On the nearby Seine he moored his four boats, including two skiffs that became the subjects of several paintings.

‘Gardening was something I learned in my youth when I was unhappy. I perhaps owe having become a painter to flowers.’

The large farmhouse was situated in two acres of garden, a building with pink walls and a slate roof. In the grounds was a wonderful walled country garden. For a plein air painter, the light was perfect and constantly changing, just as Monet liked it. He was delighted and wrote to Paul Durand-Ruel: ‘Once settled, I hope to produce masterpieces because I like the countryside very much.’

Artist of the Floating World

He converted one of the barns into a studio and planted a vegetable garden and a flower garden, the latter to provide subjects for still-life paintings when bad weather prevented him from going out into the countryside. He worked on the garden at Giverny over the next four decades, adding land to it and creating the famous lily pond, the depiction of which was to occupy the last years of his life.

In 1890, Monet had bought a parcel of land that lay across the road from his flower garden. He installed a shallow pond that was later increased in size and planted weeping willows, irises and bamboo beside it. In it he planted several varieties of lilies. He said: ‘I planted my water lilies for fun, when I saw all of a sudden that my pond had become enchanted. I seized my palette. Since then I have had no other model.’

Painting the large panels of water lilies was a mammoth task and Monet, now in his sixties, was no longer the young man he used to be. Once he would have clambered across rocks on the Normandy coast to gain the best aspect for a painting. Now he was suffering from occasional dizziness and was often a victim of debilitating depression. More worryingly, the eyes that had served him so well over the years were beginning to trouble him.

In his 1899 paintings of the Japanese bridge at Giverny, Monet calmly evokes a charming spot in his garden, his paint laid on in short brushstrokes as was his habit in his later years. His eyesight, however, was failing and the paintings are not as assured as earlier work, although his perceptive use of colour is still intact.

In the last years of his life his eyes were failing him badly and his 1923 Water Lilies: The Japanese Bridge is an altogether different type of painting that has an almost abstract quality – a frenzy of red brushstrokes, heavy with paint, delineating the bridge and the surrounding flora and fauna.

Rarely can place and art have come together so perfectly as at the last of Monet’s many residences – the beautiful Giverny. The Water Lilies series of around 250 paintings, the main focus of Monet’s work towards the end of his life, represent the crowning glory of his series paintings and, arguably, of his entire painting career. Now immensely valuable, one of them – Water Lily Pond, 1919 – was auctioned for almost £41 million in 2008.

If you want to read more about Giverny and Monet's amazing Water Lilies paintings, take a look at our fantastic new book Claude Monet: Water Lilies & The Garden of Giverny. You can take a closer look at the book here. You can also buy it from Amazon here.