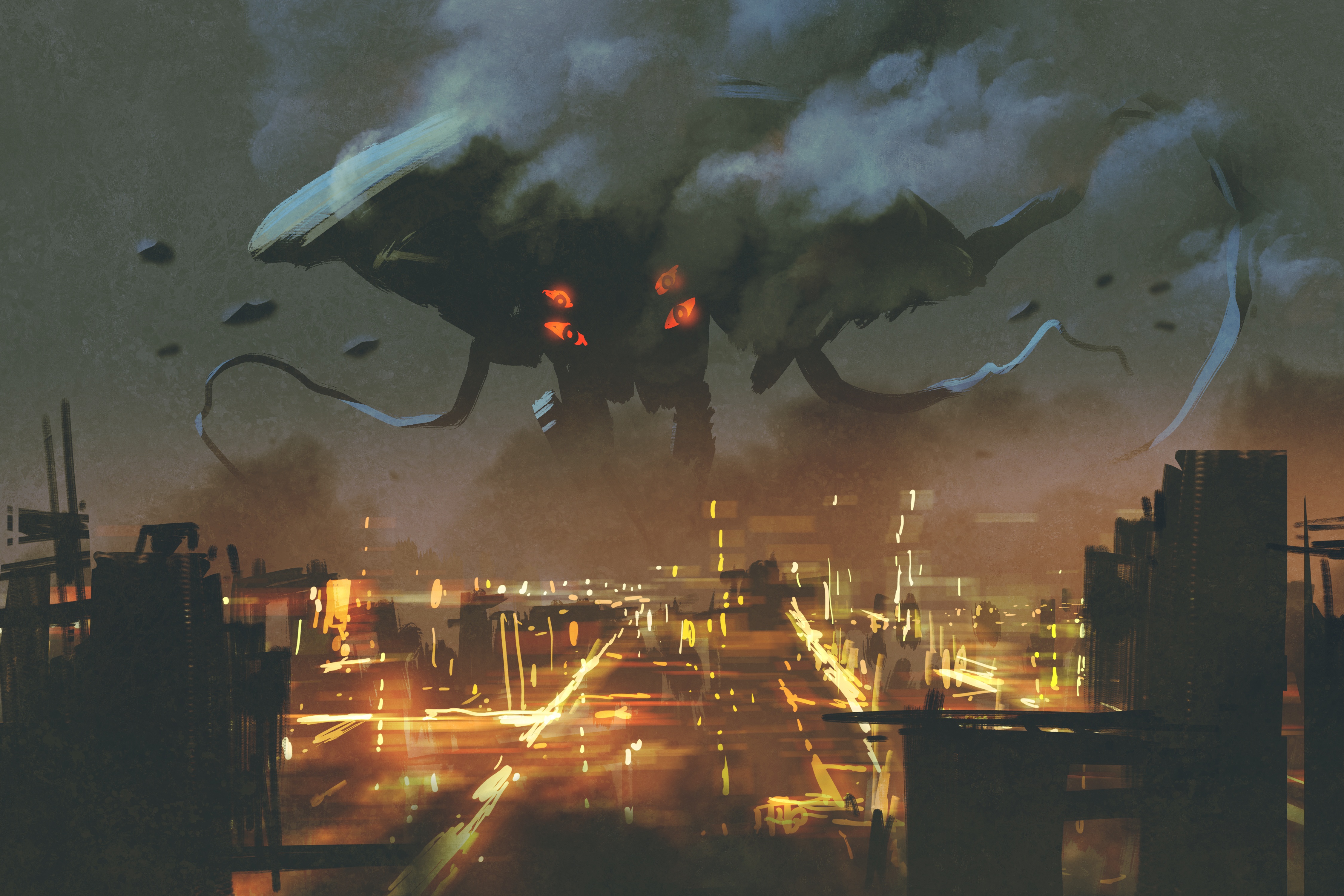 Of course, H.G. Wells's novel The War of the Worlds, and, also of course, Orson Welles's brilliant 1938 radio drama adaptation. Beyond that: the 1978 Philip Kaufman film Invasion of the Body Snatchers is my favourite iteration of the often-adapted Jack Finney novel; W.D. Richter's insanely fun 1984 film, The Adventures of Buckaroo Banzai across the 8th Dimension; George Alec Effinger's hilarious story ‘The Aliens Who Knew, I Mean, Everything’.

I've been a fan of Ray Bradbury since forever, and his short story ‘Boys! Raise Mushrooms in Your Cellar!’ is a story that has stuck in my head since I read it in my early teens. The War of the Worlds by H.G. Wells is another fantastic classic. Also, the 1981 British TV series The Day of the Triffids, and the TV-show V (also from the 1980s) made huge impressions on me when I was a kid.

One of the greatest and most devastating alien invasion stories of all time is ‘The Screwfly Solution’ by Racoona Sheldon, alias Alice Sheldon, who most often wrote under the pseudonym James Tiptree, Jr. In it, aliens pervert human sexuality so that men start killing off all the women, thus effectively ending the human race so that the aliens can take over the Earth. Another favourite is the novel This Immortal by Roger Zelazny.

The book Shade's Children, the movie Attack the Block and the video game Half-Life 2 always come to mind as particularly vivid alien invasions. I've also written an alien invasion novel of my own, Annex, which draws on all three of those inspirations and comes out this July from Orbit Books.

I grew up with Ursula K. Le Guin and her The Left Hand of Darkness. She showed me strangeness could be rightness, and that the real aliens are often humans. Also Larry Niven, whose style is old-fashioned now, but who I love for his strange aliens and the breadth of his vision. Right now I like to read Ann Leckie, Kate Elliott, Neal Stephenson and William Gibson. 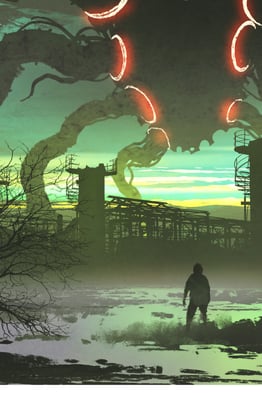 John Carpenter's version of The Thing, based on John W. Campbell, Jr.'s Who Goes There? For me the real fear isn't for the characters in the story but in the apocalypse that would result if the creature(s) survived and made it into the world. There would be no containing it or saving any part of ourselves and that's about as horrify
ing as it gets.

Years ago I read Octavia Butler’s Dawn and was blown away by how Butler used an alien contact story to wrestle with big philosophical questions. What does it mean to be human? Why is humanity so mired in violence? What does it do to us to welcome otherness into our very identities? Similar themes come up in Arthur C. Clarke’s Childhood’s End. In graduate school I devoured Orson Scott Card’s Ender books – especially the second in the series, Speaker for the Dead, which so powerfully dramatises the tragedies that can result when we fail to understand the other. More recently, I’ve been reading Nnedi Okorafor’s Binti series, which also succeeds in using the alien contact theme to tell a great story that sheds light on these questions.

My favourite stories about hostile aliens invading the Earth are the terrifying short story ‘The Screwfly Solution’ by by Raccoona Sheldon (Alice Sheldon / James Tiptree Jr), the classic Twilight Zone episode ‘To Serve Man’, and the movie The Thing, which includes a brief but fantastic performance by a dog playing an alien trying to pass as a dog.

I love alien invasion stories and could talk about them for hours, but in the interest of brevity, I’ll pick two that come to mind because they’re at opposite ends of the spectrum. Independence Day is the quintessential blockbuster, the high watermark for movies where aliens blow up the White House. Arrival – based on the excellent Ted Chiang story Story of Your Life – engages both the head and the heart, grappling with the idea of how difficult it truly would be to communicate with aliens. I love both movies for their message that in a situation like this the countries of the world would need to work together, but only one of them has Will Smith punching an alien in the face and declaring, “Welcome to Earth!”

I always write direct on to the computer now, but I do sometimes make scribbly notes on paper beforehand; both these things are done at my desk, always. Any time of day will do, although I feel getting an early start – before the world wakes up – is a good plan.

My writing process is best described as “a mad rush just before the deadline”. I used to write in a text editor, then using a simple 'distraction-free' program called WriteRoom. A few years ago I switched to Scrivener and never looked back. I may be bad at managing my time, but at least Scrivener lets me keep all the bits and pieces of my stories organised.

I tend to write everything on Word and try to avoid getting into any habits, although I prefer to write by daylight. When I need to plan longer works I'll do it with pencil and paper and, in the early stages, often stories come to me in fragments. In that case I write down what comes, as it comes, and try to piece the jigsaw together once I have a beginning and an ending.

I... have poor writing habits. I write early drafts in quick bursts, often three or four days long, and edit slowly. I'm not a plotter, but a discovery writer (or ‘pantser’ as we get called). For shorter fiction, I usually start with a specific story twist in mind (a ‘what if’ if you will) but I don't want to let the reader see that idea until the end. So I have to build around it, trying to subtly weave clues. I'll go down many dead ends before finding the core of the story. It can be frustrating, and affect my motivation, having the image of a story's shape in my head but not being able to define it in words. I'm still learning.

I write without a plot and make notes as I go. Some novels want to be typed, others explode into blank books. I'm at my desk by 6 a.m. unless it's warm enough to hike first. The current project gets the first three hours. If there's any energy left, secondary projects get attention. I work on way too many things at once, have no patience, really want to write everything, and lost my discipline a few years ago (which means I really am trying to write everything at once). It's kind of chaos, with cats. I'm working on it.

In fact, I don’t know the precise answer to this. Sometimes I’ll draw an outline of short stories, however, the final story version is often the opposite of my outline. As for novels and novelettes, even the beginning part would be revised. Tolstoy said he can’t determine whether the characters in his stories would live or die; maybe this is the reason why I can’t explain my writing process. 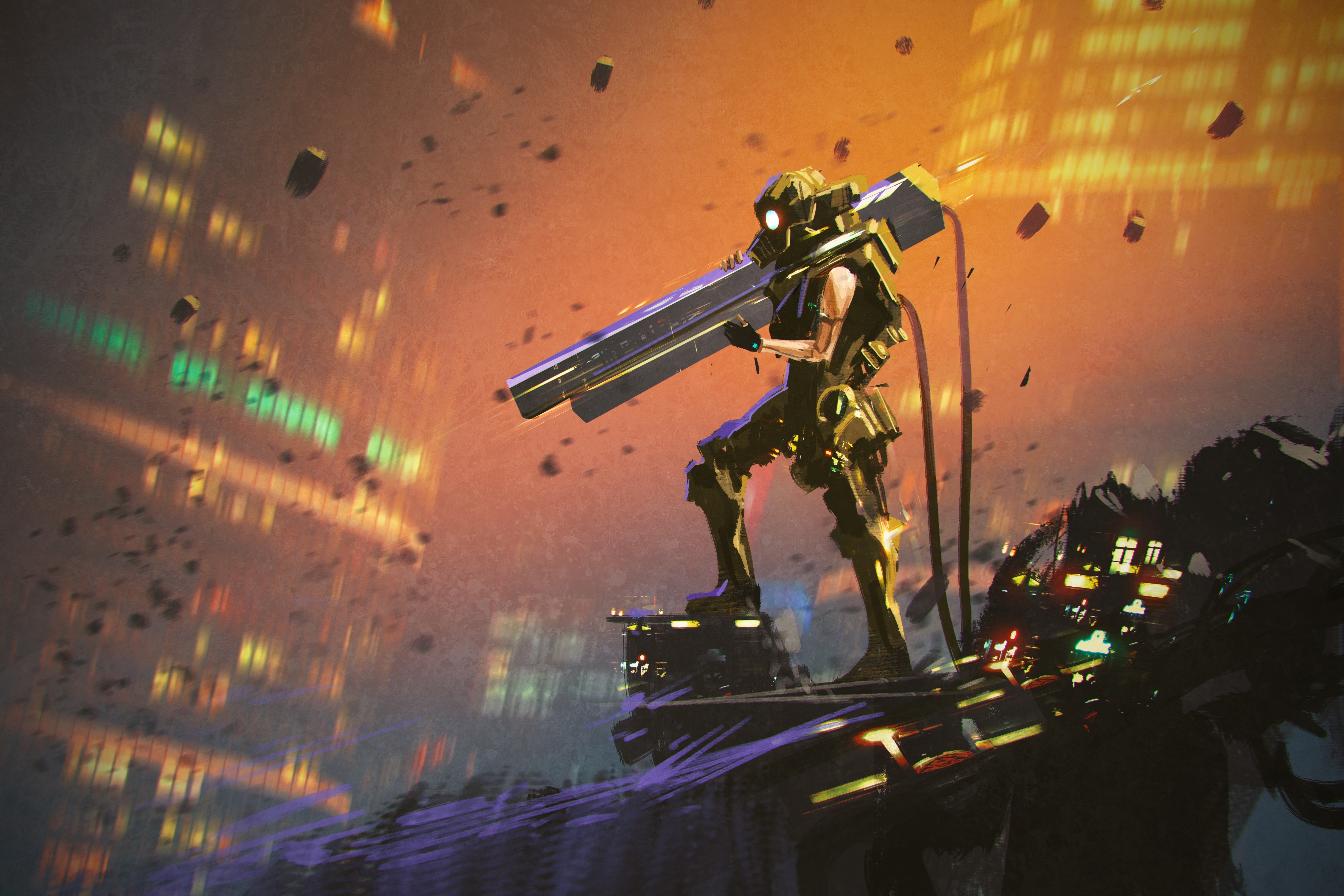 Intrigued to read the book? Alien Invasion is now available to buy through our website here. It was released alongside the volume Endless Apocalypse, which can be found here.