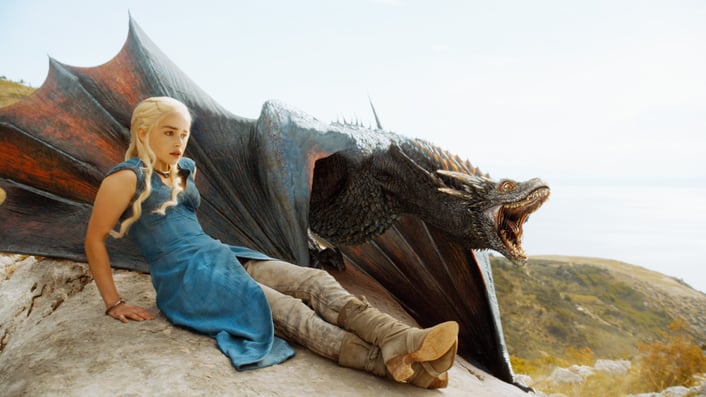 Image via Game of Thrones Wiki

A storyline that more or less concluded last week was Daenerys' continuing plight to bring peace to Meereen. At the end of episode nine we saw the young queen being whisked away from battle after the dramatic appearance of Drogon, her largest dragon previously thought lost. It's hard to not be caught up in the drama of it all as we watched Daenerys soar across the sky on the back of her mythical pet. Then, in last night's episdoe we were reminded of his fearsome power as he casually feasted on the carcasses of over half a dozen animals.

Yet despite frequently revisiting Daenerys' campaign in Meereen this year, we have not really seen as much of the dragons as we have of the other fantasy elements in the Game of Thrones universe. This season certainly belonged to the White Walkers and their dramatic siege on Hardhome. During our time with Game of Thrones we have also seen corpses raised from the dead, giants wade into battle, rock-like monsters riddled with virulent greyscale, individuals who can 'warg' into the bodies of animals, plus much more.

The lion's share of dragon screen time was frustratingly dedicated to Rhaegal and Viserion, Daenerys' other two dragons who are chained up underground. However, these rare encounters serve only to pique our interest in these fantastic beasts. This can be incredibly frustrating for the avid GOT fan, so what's the reason? Well, according to fan theories across the web it may be because they have yet to play a bigger role in the overal GOT story.

The short version is this: There were 5 known dragon eggs. Regardless of the other two, we know that Daenerys hatched three of those eggs during Khal Drogo's funeral. The rumblings online are that the remaining two dragons (plus Daenerys' three) will be instrumental in the closing chapters of the GOT plotline. Here's a fairly approachable article about who else in the GOT universe may be a dragon rider like Daenerys. But if you've got a spare hour, you might want to delve into this long and very detailed post about how there could be a frickin' dragon inside the Great Wall.

GOT is single handedly responsible for something of a dragon renaissance in recent times and we couldn't be happier here at Flame Tree. We're huge fans of fantasy art and have a passion for collecting the work of new and emerging talents so that we can promote them in our art books. Right now we have a stunning large-format dragon art book packed with 170 amazing illustrations.

You're going to have to wait a whole year for the next series of GOT (maybe even longer for the book!), so why not treat yourself to some dragon art which you can take home and enjoy. There are even sections which deconstruct the images, giving you a helping hand in drawing your own awesome images.

Check out our other dragon posts:

Want some thing free? Download a preview of our dragon art book here.