Our latest short story anthology, Chilling Crime Short Stories, is out today in the USA and Canada! In keeping with other books in the series, the collection combines new and recent fiction with work from classic authors of the genre. To celebrate its release into the world, we’ve been in touch with the modern authors to ask a few questions about their ways of working, influences, and their story in the book. In this first part of the Q&A, they share a little about the inspiration behind their contributions…

This story was inspired by the real-life New England ‘vampire panics’ of the late nineteenth century. The region suffered from sporadic outbreaks of disease – probably tuberculosis – and as a result, people became convinced that their deceased relatives were rising from the grave and feeding off their life force. So occasionally, whole families and even whole towns would go to the cemetery, exhume a corpse, and dispose of the ‘vampire’ using methods that were often region-specific – decapitation in one state vs. driving a stake through the heart in another. It’s a lesser-known case of mass hysteria, but there's some suggestion that Bram Stoker was reading newspaper accounts of these episodes while he wrote Dracula.

This story was originally written a few years back for a charity anthology (A New York State of Fright) to raise money for burgeoning female writers. An editor friend requested dark stories with the main parameter being that the tale must be specifically unique to New York. I did some quick research into the dark history of NYC and this story practically wrote itself.

I watch a lot of true-crime television. Those shows made me wonder what circumstances might change the dynamic between a killer and a chosen victim.

Ramsey Campbell – A Name for Every Home

It was a case of a process I sometimes go through – having an idea that becomes unrecognisable in the development. I originally thought of a suburb where the houses have ominously occult names that prefigure the fate of the central character. Once I decided he was a postman the story took a different turn and came up with his encounter with a criminal family, somewhat reminiscent of my novel The One Safe Place. The original idea remains to be developed.

Just the word ‘Chilling’ was enough to inspire this, then feeding on that primal fear of darkness and claustrophobia. Who can claim that the thought of being buried alive doesn’t give them a chill? Then adding an element of historical crime and what better scenario is there than grave robbing?

The concept for ‘T.H.O.R.N.’ came from reading articles about everyday people struggling to pay the bills for lifesaving medicines or hospital procedures. I wondered what would happen if the ‘pay the bill or else’ mentality went to its limits.

It started with the flash of an image: a young boy waking up in the night to the sound of a table-saw blaring from the garage. Most stories I write start with an image I can't shake. The next question is: who's telling this story? In the case of ‘Trigger’ it was that young boy, and his voice was so specific, so particular, that it created the environment in which the story takes place. The deeper inspiration is probably the idea that we all learn, at some point, that our parents are flawed. How flawed depends on the family, of course. But the adults in our lives gradually shift from infallible to…something else. This story was answering the question of what that looks like taken to an extreme.

For some reason, the final line from this story came into my brain, and I worked backwards from that line. It was a very different story from what I normally write, so I had fun with it. 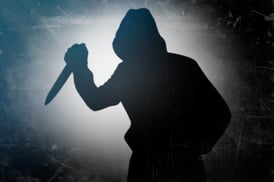 I've always found women’s history fascinating because so much of it is hidden, and the story of Jack the Ripper shows that better than most. So much secret suffering. In the end, it was the disdain of the wealthy for the poor and contempt of society for the feminine that was highlighted when Jack's crimes were discovered. I wanted to explore that, to show how chilling it really could be.

My story ‘The Present’ began at the end, by which I mean I wanted to finish with a certain scene that I imagine happens several times a year in the lives of real people. The whole story is a build-up to that ending. As for the subject: when we had a baby I became aware of the extra sense I think most parents grow – that awareness that you have to think just a little harder, be a bit more aware of what’s going on, to keep your child safe.

First and foremost, I wanted to write a locked-room mystery story in the classic, golden-age style. Locked-room mysteries are often a surreal experience by their very nature, so I decided to embrace that by incorporating echoes of the M.R. Jamesian ghost story. With that in mind, I couldn't resist setting it in a snowbound country house. And as for the deceptively simple title, I wanted the answer to the puzzle to be there in plain sight all along – if you know how to spot it.

I've had a novel idea kicking around in my head for a while now about a black ops government agency dedicated to hunting monsters. One of the ideas for a supporting character was a sociopathic professional assassin the agency had managed to put on a leash, and I thought it'd be fun to write a short story centring around his recruitment.

I wrote it a few years ago in response to a submission call for another anthology that was for stories set in the 1950s. I’m old, but I’m not quite old enough to remember the 50s, so I had fun researching the clothes, food, etc. for the era. Beyond that, I grew up reading Alfred Hitchcock and Ellery Queen anthologies, and this is the type of story that would appear in those publications. A crime story involving ordinary people that builds up to an ironic ‘twist’ at the end.

I started ‘Move-in Weekend’ with the question of what would happen if a bad child such as Rhoda in The Bad Seed or Henry in The Good Son were to grow past adolescence without ever being caught or rehabilitated. How would such a child grow up, and what problems would they wrestle with as they prepared to leave the nest?

‘The Dead Man’s Dog’ started the way most of my favourite writing experiences begin: an opening sentence, accompanied by a mental picture so strong I knew how the character was dressed, what her motel room looked like, how the dog smelled – everything but the story itself. These what I call ‘story seeds’ can be vivid enough to just follow down the road, writing by the headlights as the landscape gets revealed one scene at a time. It's an incredibly organic experience, and feels like a gift when it happens.

Dan Stout – The Bulldog Ant Is Not a Team Player

This story was born while I spent a weekend in a remote cabin. As I relaxed on the deck, it occurred to me that not everyone would find that location peaceful. The idea of a gang of criminals hiding out in a remote cabin struck me as interesting, and I knew it was the perfect setup for a story filled with paranoia, puzzles, and double-crosses.

In England and Wales several folk traditions such as the Mari Lwyd and Antrobus Soulcakers use a horse skull as part of the costume. To make sure that they always have a skull available, they have one buried. I’ve previously merged crime and folk horror in ‘The Jaws of Ouroboros’ and wanted to do similar again. While a lot of hard crime fiction is urban I think a rural setting can intensify the story because of the isolation.

To read these stories and more, buy the book from our website here!