The festive season is upon us, and we have been celebrating the release of Christmas Gothic Short Stories, our latest anthology packed with tales from modern and classic writers. In Part 1 of this Q&A, authors from the book spoke about the inspirations behind their contributions. Now, they offer recommendations of other stories, films and artworks, as well as giving us insight into the many different ways a writer’s work comes together!

H. Russell Wakefield’s ‘Lucky’s Grove’ is a classic of lurking supernatural menace, worthy of M.R. James and uncovering the pagan roots of the Christmas tree. Lovecraft’s ‘The Festival’ finds presences yet more monstrous brought out of the dark and the earth by the festive celebration. I’m also still haunted by a tale from my infancy – from Christmas 1947’s annual More Adventures of Rupert. In ‘Rupert’s Christmas Tree’ the little bear acquires a magical tree that decamps after the festivities and returns to its home in the woods. Perhaps this is meant as a charming fantasy for children, but the details – the small high voice from the tree, the creaking that Rupert hears in the night, the trail of earth he follows from the tub in his house, above all the prancing silhouette that inclines towards him the star it has in place of a head – are surely the stuff of adult supernatural fiction. I think I got my start in the field right there, and many of my preoccupations must derive from my early childhood. In films, The Night of the Hunter is a superb dark fairy tale (among other things) that leads to a Christmas resolution. And we must surely include It’s a Wonderful Life, often misrepresented as a feelgood film. Perhaps it ends that way, but it’s seminal in exposing the tortured side of James Stewart (and the circumstances that produce it) before Hitchcock and Anthony Mann made films that probed it.

Obviously, I love Dickens’ A Christmas Carol. But beyond that, there aren’t a lot of great classic holiday horror tales, and the few that there are have already been compiled in this book! That’s why I love the fables of Krampus, Percha, the Yule Lads, etc. How the Wild Hunt rides through town, the Crone in her kitchen baking children into pies…that’s holiday horror! I’ve yet to see a really good Christmas/Krampus movie – it’s all serial killers.

I gravitate towards that rich period from the late Victorian period to the end of the Edwardian, where the stiff and Gothic had begun to mutate fully into the weird and disquieting, where stock figures were replaced or augmented by mood and ambiguity. From Charlotte Perkins Gilman’s ‘The Yellow Wallpaper’, to M.R. James’s ‘Oh, Whistle, and I’ll Come to You, My Lad’ and Saki’s ‘Sredni Vashtar’, a field of worrying thoughts was truly established.

I love Christmas stories with a twist. The one that really sticks out for me is the dark comedy movie Scrooged, starring Bill Murray as a selfish and cynical TV executive in the Scrooge role. I’m a sucker for pretty much all versions of A Christmas Carol, but other memorable Christmas movies for me include It’s a Wonderful Life, the 1947 and 1994 versions of Miracle on 34th Street, and of course Elf.

Christmas ghost stories aren’t a part of the holiday tradition in the US the way they are in Britain. The only one we know is A Christmas Carol, which my family used to read aloud every Christmas Eve. My favourite gothic ghost story of all time is probably The Turn of the Screw. I’ve seen as many onscreen versions of it that I could find, the best being the 1961 Deborah Kerr vehicle The Innocents.

A favourite story has to be ‘Oh, Whistle, and I’ll Come To You, My Lad’ by M.R. James, which has also been included in the anthology. The televised version was also an influence, as was the painting Winter, St Ives by David Inshaw. It’s of a woman walking on the beach with her back to us on a freezing cold day. This was the picture I kept in mind while writing ‘The Shallows’ [my story in Christmas Gothic].

Susan Hill’s terrifying novel The Woman in Black begins on Christmas Eve, with the thoroughly gothic tradition of families telling ghost stories around the fire. The story, along with its play and movie adaptations, grips me from start to finish – the chill goes far beyond the falling snow of the season.

As mentioned in the first part of this Q&A, Neil Gaiman is one of my favourite writers. Edgar Allan Poe is another. The writer crafts the world as he sees it, and Poe’s world was dark and dreary and tragic, but it was also beautiful. That he was able to find beauty in the life he led is extraordinary to me. That’s what I like about gothic fiction. The delicate balance between the beautiful and the grotesque.

There are so many. Filmwise – The Changeling, The Others, TV – Mike Flanagan’s The Haunting of Hill House (from the Shirley Jackson novel), some of the best ghost stories, for me, are the classics – Edith Wharton’s ‘Afterward’, M.R. James’ ‘Oh Whistle and I’ll Come To you, My Lad’, Mary Elizabeth Braddon’s ‘The Shadow in the Corner’… the list goes on.

I do a few writing prompts every morning and often work on poetry before settling into whatever novel I am undertaking at the moment. I only work on one major tale at a time. I immerse myself in my main character, to the extent that my whole life is experienced through their perspective, so it would be impossible to do otherwise. When I am in between novels, I work on my short stories, essays, and other projects. 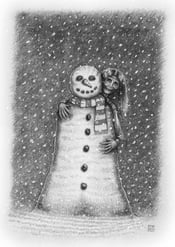 Very often, my stories are kickstarted by a visual image, around which a story develops. I will often sketch this image to help stimulate the creative process. I did this with ‘The Unforgiven’ [my story in Christmas Gothic], see opposite (image used with permission). I found it extremely helpful to have the picture as a visual touchstone towards which I could build the events of the story. I tend to write in long-hand to begin with before switching to Microsoft Word for the editing process. I’ve been writing period stories for the last couple of years, and I find that the slower pace of putting pen to paper helps me to find the voice of past generations. I’d be interested to learn if any other contributors to Christmas Gothic employ similar ‘method writing’ techniques!

Different stories come at different cadences for me, but the process always involves getting a lot of feedback. My Brookfield and La Grange writers group friends were a great sounding board for my story in Christmas Gothic, as well as many other spooky holiday stories I’ve shared with them over the years. Test readers, feedback, and outside perspectives are the most important part of my process.

Often I start with the entire idea. But many times, ‘Christmas at Trelawney’ [my story in Christmas Gothic] as an example, I start with a protagonist and a place. The story developed on its own. I often use real characters and history in my work. Fact is indeed stranger than fiction, and always crueller. I usually edit as I go, though sometimes I dictate a story into my phone and edit later.

Most of my writing is done away from the keyboard. My habit is to take long walks along the bayou, during which I plot out my stories. I tend to have several going at once so I can work on whichever best suits my mood.

I write fiction completely out of order. It’s such a mess! I sort of see movie trailers in my mind, then I start figuring out how those characters got into those situations. Over time, I connect the disparate chunks together. My best writing time is the hour or two after my kids are tucked in each evening. I prefer to type rather than handwrite, because it’s faster for me – and because my penmanship is atrocious.

I daydream a lot and spend time staring out of my window, before starting with a rough, handwritten draft. I let it settle before typing it on my laptop. I think that allows different parts of the brain to contribute. Then I enjoy the editing almost as much as the creating. As I’m writing in my haunted attic I try not to spook myself too much!

I write everything on my laptop, using MS Word. In cool weather, I’m propped up in grandma’s old wingback chair or my more modern recliner. In warm weather, I’m slumped down in the papa-san chair on the back deck. Before I start writing, I try to map out the whole story in my head, including specific scenes and even some of the dialogue. I do the entire first draft and then try to leave it alone for a few days before the revisions begin. That way, the “Good Lord, what was I thinking!” parts jump out more clearly.

I usually try and alternate between short stories and full-length manuscripts, or occasionally take a break from my longer work for a few days to focus on a short story. Switching between projects like this helps keep the ideas fresh in my mind and prevents creative burnout!

I take lots of notes in my notebooks, a nice little hodgepodge of images, scenes and lines that begin to build up into a tale. When I am working on a specific story, I tend to write chunks here and there until it’s completed. Plus, I have one day per fortnight away from the day job that is devoted to writing – over a big pot of tea and with my dog curled up by my side!

I am a slow writer, pecking away at my ancient laptop, always in search of the perfect word before being willing to move on. I usually have to write the story once through before I actually figure out what it’s about, and then I can start over in earnest. I write with the door open so my kid can run in and remind me that real people matter more than the ones I’m making up, and that I should play LEGOs, or take a walk, or serve us both giant bowls of ice cream. 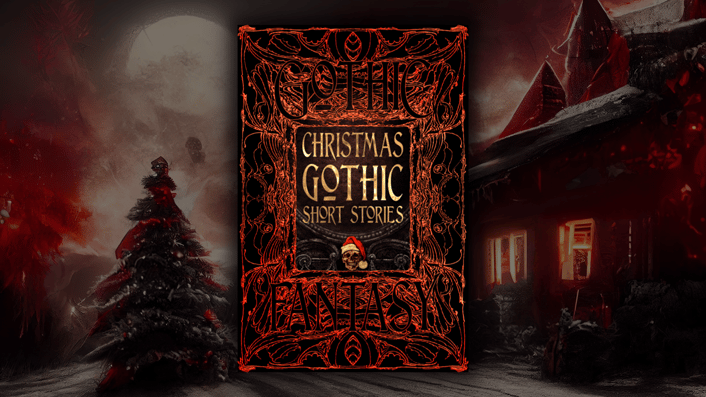 The book is available to buy now – buy from our website, Amazon or Barnes & Noble!