Next up for this month's Q&As with our April authors, we have Eric Lewis, author of The Heron Kings. He discusses what he enjoyed the most about writing the novel, some of the themes in the book and advice for new writers! Be sure to check in tomorrow for more writing inspiration!

The Heron Kings follows a band of lowborn insurgents caught between two sides of a bloody dynastic war in a fictional, vaguely medieval-style world. They’re led, quite by accident, by an apostate nun who only wants to heal victims of the conflict and a grieving family man obsessed with vengeance. The tension between the two molds the group into guerrillas that use both brute force and stealth to raid and terrorize the merciless armies of both factions. But when they intercept proof of a foreign conspiracy prolonging the fighting, they use these skills to try and force the war to end entirely.

One constant theme is a kind of ‘pox on both your houses’ attitude about the conflict- our heroes have no dog in the fight, they just want to survive it. So the idea of refusing to pick any side except your own is very present.

This is reinforced by a notion of plots within plots: you think you know who the main villain is, until it turns out he’s actually a pawn of these other forces, who are themselves being manipulated by others, who in turn...you get the idea. The higher up you go, the more unclear it becomes who the real enemy is. This is something we see in our real world as well: politicians, corporations, bankers, oligarchs, what have you, so I hope that resonates.

Another theme that slowly plays out is the ultimately self-defeating nature of obsessive revenge. No matter how big and bad you think you are, there’s always someone badder, and when things escalate it just ends up hurting more and more people. Going down those paths is always seductive, but can easily end up destroying the person you were, giving your enemy the final victory.

No one’s been more influential than Frank Herbert, the author of Dune. His ability to take epic world-building, and the innermost thoughts and motivations of his characters, and connect through those two extremes into a single coherent whole was legendary. From the beginning I knew that the idea that individual human choices, small acts of defiance, can throw grand political schemes into chaos was how I wanted to tie my story together. And I love to think of my Heron Kings as kind of a cross between Robin Hood’s Merry Men and the Fremen from Dune.

The other main inspiration in terms of the setting came from When Christ and His Saints Slept, a novel in Sharon Kay Penman’s wonderful medieval saga, that deals with a 12th-century civil war known as The Anarchy. Two Norman-French nobles spent fifteen years completely devastating England, fighting over a country whose language they couldn’t even speak. The common people had little cause to prefer one over the other, though they did a lot of the dying. The idea of a peasant insurgency against both sides was something I always thought would be interesting. Of course the constraints of actual history required a fictional world for my novel.

I’d also like to think a few dashes of Joe Abercrombie and Scott Lynch added some spice to the story. Additionally, other writers I’d also say influence me would be Robert Graves, Colleen McCullough, and Peter S. Beagle. And sure, Stephen King and Tolkien and GRRM, but everyone says them.

I’m still looking for advice myself! Someone once said that a professional is just an amateur that was too stubborn to quit, which describes me well. I guess one good piece of advice you can take from that is don’t stop. Don’t be discouraged by failure. Well, it’s natural to be discouraged a little bit, but come back to it anyway, and don’t stop learning and improving. Don’t make the mistake of thinking you’re some special savant with natural talent, but don’t think you need to be. Work at it and keep working.

As cliché as it sounds, a lot of it was done in Starbucks. Or Dunkin Donuts, or Tim Hortons or wherever was convenient at the time. The first draft was essentially just a vain hobby, done a few pages at a time on lazy weekends. I usually scribbled out the rough chapters on old fashioned pen and paper, then rewrote them into slightly less incoherent versions on the laptop, and those became the first drafts. For some reason it’s easier for me to get things out by first putting them down physically versus on a screen. Which can get painful when you’re left-handed!

I require a great deal of white noise. Silence distracts me, and being completely alone with one’s thoughts can be terrifying. Music is also distracting, whether it’s good or bad, so the best middle ground for me is somewhere in public with just enough background noise to stimulate the gray matter.

I’ve found the hardest bit to be going from a rough outline to the actual plot that ties all those waypoints together. Which I suppose is the core of writing, so I guess I do find it hard. But I love having written. Going back and editing is not so difficult, because now that I can see the chapter or scene or whatever in my mind, fixing what’s not quite right is easy because when it becomes right I can feel it, something clicks and it’s like Ah, now I’ve got it! That’s a good feeling.

The Heron Kings is the first book I finished, but not the first I began. Years ago as a grad student I started tinkering with a story about this band of exquisitely-trained forest fighters that had been living in secret for a hundred years or more, mostly for my own amusement and certainly with no thought of publication. I tinkered for years and years, and eventually realized I’d written a quarter million words of sprawling, unworkable mess with the story only half finished. So I started over with an outline of a new story, which was this group’s origin story, and began the work that became the first novel. But I’ve always wanted to return to my original plot, redo it using the skills I’ve (hopefully) developed since. It would be a kind of sequel, still about the Heron Kings but set a century after the first book, with a new set of characters and of course higher stakes. So that’s what I’m tinkering with now.

Self-indulgent question I came up with myself: What did you enjoy most about writing this story?

Like many overgrown nerds I’ve always had a fascination with swords and other medieval weapons. But learning about a thing means you come to notice when that thing is done wrong. So when you see some movie where a guy in the year 1183 swings around a two-handed longsword wearing full plate armor or shoots fire arrows that explode on impact, or read a book that does these things, the pain is real. One thing I really enjoyed was incorporating what I hope to be realistic weapons and armor for the technological level of the world. You can’t call it historically accurate since it’s a fictional world, but at least it’s somewhat physically accurate. If your character wears mail armor, they’re going to need a shield. Which means they only have one-handed swords. And by the way, mail is expensive so most soldiers would wear cloth armor. And swords are expensive too so most soldiers would carry spears. And when you shoot an arrow there’s no reason to say “fire!” because there’s no fire involved in the act of shooting an arrow. Unless it really is a fire arrow, which is a rare thing and has to have a specially-made head to carry burning material and does not explode when it hits something, and on and on! So being able to right some of those wrongs was enjoyable. I’m sure I got many things wrong but, again, it’s a fictional world, so there’s an easy out.

Another self-indulgent question I came up with myself: How would you categorize this book?

This has been tricky for me. The realities of bookselling mean it has to go on a shelf with some label above it. The one that fits best is going to be fantasy, but this book has precisely one speculative element: it’s set in a fictional world. There are no elves, dragons, fairies or any magical element. I make no apology for this, but neither do I want anyone misled into thinking they’re getting something they aren’t. That said, writers like Guy Gavriel Kay have made most of a great career writing in this space. Joe Abercrombie’s books often have very little magic or other fantasy elements and do the job very well. I’ve described my novel as a historically-inspired grimdark revenge fantasy, though it tends to wade more at the shallower end of the ‘grimdark’ pool than other titles. Grimlight maybe?

Thank you to Eric for taking the time to talk today about The Heron Kings. You can pick up this book, along with the other April releases now. It will be available in paperback, hardback and ebook. Check out our website for details. 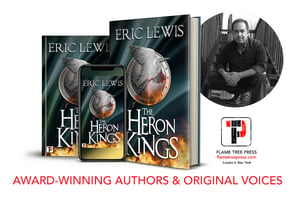 By day Eric Lewis is a PhD research chemist weathering the latest rounds of mergers and layoffs and still trying to remember how to be a person again long after surviving grad school. In addition to subjecting his writing to one rejection after another, he can be found gathering to himself as many different sharp and pointies as possible and searching for the perfect hiking trail, archery range of single malt Scotch. Don’t ask where, because he’s never lived anywhere for longer than five years.

His short fiction has been published in Nature, Electric Spec, Allegory, Bards and Sages Quarterly, the anthologies Into Darkness Peering, Best Indie Speculative Fiction Vol. 1 and Crash Code, as well as other venues detailed at ericlewis.ink. THE HERON KINGS is his first novel.