Lastly for this month's Q&As with our April authors, we have Ramsey Campbell with The Wise Friend. He discusses what influenced his writing of the novel, some of the characters in the book and why horror is his genre of choice! Be sure to check in tomorrow for our next Flame Tree titles.

Thelma Torrington was famous for her paintings but died in mysterious circumstances. Her nephew had uncanny experiences at her house, and now his teenage son is obsessed with the occult meanings of her work. When the son starts visiting sites where ancient occultists are buried, he becomes a victim of the forces he's awakening, and his father must go to terrible lengths to save him.

The fear of what may happen to your children, especially as they grow up, and the survivals of magic and the uncanny in the world.

I’d say the tradition of supernatural horror fiction – the suggestiveness of M. R. James, the folk terrors of Arthur Machen. Equally, though, I owe a great deal to my teenage enthusiasms for Graham Greene and Nabokov, firm favourites still. As a whole, though, after sixty years of writing in the field I hope my work is recognisably my own.

Thank you to Ramsey for taking the time to talk today about The Wise Friend. You can pick up this book, along with the other April releases now. It will be available in paperback, hardback and ebook. Check out our website for details. 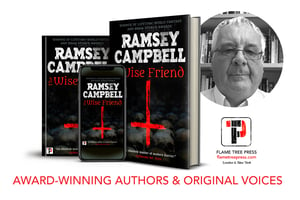 In 2015 he was made an Honorary Fellow of Liverpool John Moores University for outstanding services to literature. Among his novels are The Face That Must Die, Incarnate, Midnight Sun, The Count of Eleven, Silent Children, The Darkest Part of the Woods, The Overnight, Secret Story, The Grin of the Dark, Thieving Fear, Creatures of the Pool, The Seven Days of Cain, Ghosts Know, The Kind Folk, Think Yourself Lucky and Thirteen Days by Sunset Beach. Needing Ghosts, The Last Revelation of Gla’aki, The Pretence and The Booking are novellas. His collections include Waking Nightmares, Alone with the Horrors, Ghosts and Grisly Things, Told by the Dead, Just Behind You and Holes for Faces, and his non-fiction is collected as Ramsey Campbell, Probably. Limericks of the Alarming and Phantasmal are what they sound like.

His novels The Nameless, Pact of the Fathers and The Influence have been filmed in Spain. He is the President of the Society of Fantastic Films.