Continuing our blogs looking at the authors behind our March releases, we turn to Michael R Johnston and The widening Gyre. He talked to us about being a teacher, the hardship of creating characters and the importance of representation in his novels.

What is The Widening Gyre about?

Please allow me to be a fru-fru literature teacher for a moment: It’s about self-creation, and re-creation. It’s about building a family to replace the one you lost and reclaiming yourself from bitterness. It’s about climbing out of the hole you’ve dug yourself into.  It’s about healing, both yourself and your people.

Find a group of people, both writers and non-writers, who will give you honest, kind, no-BS feedback.  You want people who won’t be rude, but will tell you, openly, where you’re not succeeding as a writer, as well as where you’re knocking it out of the park.  The best part of Viable Paradise, the writing workshop I attended, was that I met a group of writers who’ve stayed in touch.  Many of us talk every day, both about writing and our lives in general. We discuss story elements, critique each other’s work, and help each other become better writers.

Did you write the book in silence, or do you prefer to write to any particular music?

It really depends on my mood and where I’m writing.  If I’m writing in public I tend to write in silence.  If I’m at home at my desk, I’ll play various “mood” playlists I’ve created.  I have one for space battles, another for “sneaky” suspense, and another that’s just good instrumental pieces, most of them from TV or movie soundtracks.  I generally can’t write to music with lyrics; the words get in the way and the next thing you know I’m typing the song.

How does your job as a high school teacher interact with your writing?

Teaching uses a lot of the same creative energy as writing, so after a day at school, I’m often not really enthusiastic about sitting down to write.  But if I give myself a little bit of time to unwind first, I can often get some words down.  I get far more writing done during school holidays, but I’m working on ways to change that.

I also find inspiration in the classroom. I haven’t lifted any particular student from real life, but I’ve “borrowed” aspects of their personalities to inspire more verisimilitude in my characters.

What do you find is the hardest part of creating characters?

For me, the hardest thing is making sure that everything I know about them in my head is actually on the page.  For The Widening Gyre, I had a character who in my head was rich with meaning, but one of my beta readers pointed out that, on the page, he was flat and lifeless.  So, I had to rewrite some of the scenes with him to get some of that inner knowledge onto the page.  I didn’t put it all in, though--there’s a couple of secrets in there that will never actually be said “on camera.” It’s a lesson I learned at VP--that sometimes, knowing something that you don’t put into the story’s narrative makes it feel more realistic, because real life is like that—we don’t always know everything that is going on around us, but that information still informs how the world interacts with us.  In the novel, there’s one character who has a secret, and it directly informs how he interacts with everyone else, but nobody will ever know what it is.

What was your favorite scene to write?

Any scene with Tajen and Liam was fun, but my favorite was the heist in the middle of the book. That chapter just came rolling out, and it’s the one most of the beta readers had no changes to suggest.

Who are your favorite authors?

I have a lot of favorites. John Scalzi, Melanie Rawn, Melinda Snodgrass, Tanya Huff, Elizabeth Bear, and Brent Weeks are all writing things I love these days. I also love the Native American writer Leslie Marmon Silko, especially her book Ceremony, which should be required reading in American Literature classes.

When did you begin writing?

I first started writing in the tenth grade. I’d just moved to Sacramento, California, which was about six times bigger than my hometown, Napa, at that time. I didn’t know anybody other than my aunt and uncle, so to amuse myself I started writing stories. I never stopped, though I did sort of back away from it for a number of years, where I was just fiddling around with it and not pursuing it seriously.

Was it important to you to write a gay protagonist? Did you ever consider changing him?

I’ll do this one in reverse: I never considered changing that for a moment. Growing up bisexual was hard in the eighties; there weren’t a lot of positive portrayals of LGBT characters in the media I read and watched. When there were LGBT characters, they were often either villains or comedic relief characters. And in the real world, LGBT people were being demonized on multiple sides.
When I found Mercedes Lackey’s Books of the Last Herald-Mage, they were eye-openers.  I still reread those books every couple of years; that’s how much they’ve meant to me.  Even though it’s easier now for LGBT youth, at least in terms of positive portrayals of LGBT characters, I feel there needs to be more. And there need to be books where a character simply is what he is, and feels no need to worry about who he’s attracted to. I decided early on that I was going to make that happen, at least in my own books.  It’s very clear early on that Tajen is gay, but he never wastes a moment agonizing about it. He just is, and nobody around him cares much.  If I’m being honest, there’s a little bit of writing the way I wish the world really was.

I have a couple of projects in the works; one is the next volume of The Remembrance War, titled The Blood-dimmed Tide, and I’ve also got an epic fantasy series, a stand-alone fantasy novel, and another, separate space-opera series in various states of planning. And at some point, I’ll need to start outlining Remembrance War 3, currently titled What Rough Beast.

Born in the San Francisco Bay Area and raised in Napa, California, Michael R. Johnston grew up steeped in everything Science Fiction and Fantasy. 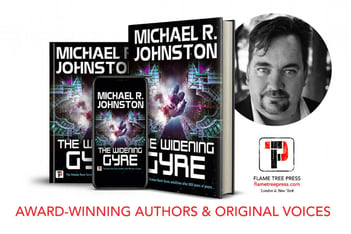 In the early 90s, he took a break from college that went from being one semester to ten years.  In that time, he had several jobs, from serving subpoenas to making sandwiches, before he became the Data Processing Manager of a small research company.
Eventually he decided he'd had enough of the corporate world and returned to college, graduating with honors from California State University, Sacramento. In fall 2006, he became a high school English teacher, a job he likens to herding a swarm of angry bees. It's the best job he's ever had.
Michael currently lives in Sacramento, California, with his wife and daughter. When he's not writing or teaching, he spends time with his family, plays video games and tabletop RPGs, and reads. He blogs at MJohnstonBooks.com, and can be found on Twitter as @MREJohnston.