I suppose the first question to ask is what is the book about?

Fundamentally, the internet as a place that sets loose our buried personalities and looses monsters on the world.

That’s a really interesting subject for our time. Did you base your characters on anyone you know or people you’ve seen?

Why did you choose to write horror?

For people who are just starting out, either in horror or any other genre, Is there any advice you can give them?

That’s interesting that you mention writing at a specific time, do you have a particular space you like to write in?

You mentioned learning to enjoy re-writing. Do you find it hard to write and do you enjoy editing your work?

I’m sure there are some people that would ask “Isn’t there enough horror in the world without creating it”?

Wouldn’t we say there’s enough crime in the world, and enough tragedy? Yet I’ve never heard those observations used as an argument that people should stop writing crime fiction or tragedies. For that matter, since there is indeed horror in the world, how could some art not reflect that? It’s also true that much horror fiction, whether supernatural or psychological, deals with a different kind than the horror in the news, though some of the fiction does indeed confront everyday experience. 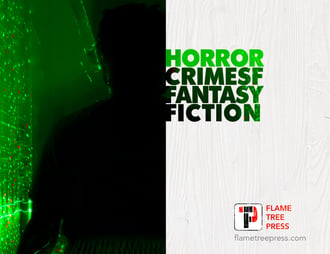 Thank you to Ramsey Campbell for this Q&A! His latest Flame Tree Press release will be available form the 15th of November in the UK and later in the month in the US and rest of the world. Think Your Self Lucky is available in paperback, hardback, audio book and ebook. Check out our website for details.

Born in Liverpool in 1946, Ramsey Campbell still lives in Merseyside today. He has received more awards than any other writer in the field, including the Grand Master Award of the World Horror Convention, the Lifetime achievement Award of the Horror Writers Association, the Living Legend Award of the International Horror Guild, and the World Fantasy Lifetime Achievement Award. He was also made an honorary Fellow of Liverpool John Moores University for his services to literature.