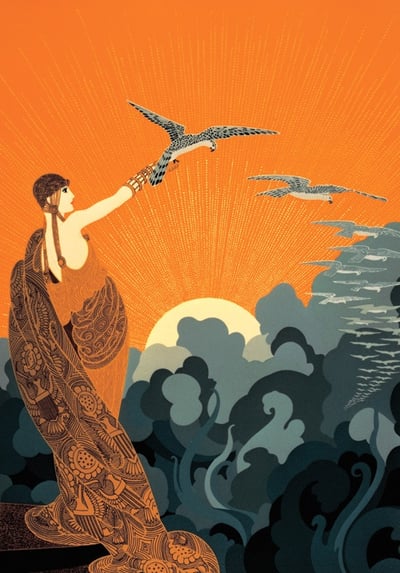 The beginnings of the graphic art of Art Deco lie in the inspirational works of commercial artists such as the Czech artist Alphonse Mucha, who revolutionized poster art in Paris in 1895, and the French artists Jules Chéret and Henri de Toulouse-Lautrec. Their sensational poster depictions of cabaret at the Moulin Rouge in Paris influenced a generation of illustrators.

However, their output was dependent on the advances in technology made by the print foundries. The new, much brighter multi-layered prints created an enthusiasm for graphic illustration. What had started in print foundries in the 1890s then flourished in the first decade of the twentieth century. Pivotal to the rise in popularity of graphic design and the huge increase in the amount of artists training as graphic illustrators, is the creation of many new techniques in the print industry. Advances in mechanized printing – and the creation of new typefaces – caused a demand for more forms of colour print advertising through posters, flyers, brochures and magazines. Advances in colour printing created a market to sell more through the advertising industry thus creating more work for printers and artists.

From 1905 to 1910 the French artists collectively known as Les Fauves, or the ‘Wild Beasts’, created raw, colour-obsessed paintings. These styles, plus many other famous names lent certain themes to quintessential art deco concepts. The death in 1906 of the French Impressionist painter Paul Cézanne had marked a seminal moment for many new art forms, also. In Paris, Braque and the Spanish artist Pablo Picasso brought the sculptural quality and painterly three-dimensional technique of Cubism to public attention - they too had an effect on the new wave of Art Deco. In Milan, the Italian poet Filippo Tommaso Marinetti spoke for a group artists, architects and sculptors known collectively as The Futurists. He announced their Manifesto of Futurism; a denunciation of the past and embracement of the new, envisaged through war, speed and the machine. Notably the manifesto was graphically printed on the front page of the French newspaper Le Figaro on 20 February 1909. The Futurists’ vision played a part in creating a clamour for the edgy, streamlined Deco style.

Modern-day interest in graphics and typography arguably stems from the European ‘Arts and Crafts’ movement. The most well-known proponent of this was the English-born poet, writer and designer William Morris. But he did not act alone, Morris and his were strongly convinced that the Gothic Revival architect and designer A.W.N. Pugin and the historian John Ruskin, who both argued against industrialization and for vernacular crafts, were correct in their belief of the need to return to the recognizable values of handcrafted workmanship.

From 1896 to 1903 Hermann Muthesius worked as an ‘attaché for architecture’ at the German Embassy in London. In 1898 he published an article in Dekorative Kunst magazine, on the English furniture, furnishings and jewellery designer Charles Robert Ashbee and his Guild and School of Handicrafts. Muthesius published the results of his design research in a three-volume work Das Englische Haus (The English House, 1904–05), which included the Arts and Crafts work of English designer and architect Charles Francis Annesley Voysey.

The aesthetic of Arts and Crafts idealists from William Morris to Charles Robert Ashbee and the designs of Muthesius’s friend, the Scottish architect Charles Rennie Mackintosh, were revealed to a wider audience of artists, craftsmen and architects in northern Europe. Ashbee and Mackintosh were instrumental in the move towards graphic design and typography. Both designed new typefaces (as did Morris), which were integrated into their designs.

Today's blog comes from a modified extract of text taken from our beautiful large format book, Art Deco. Inside you'll find text that goes into far greater detail, all set alongside stunning Art Deco images printed to the highest quality. To take a closer look at the book just click here.