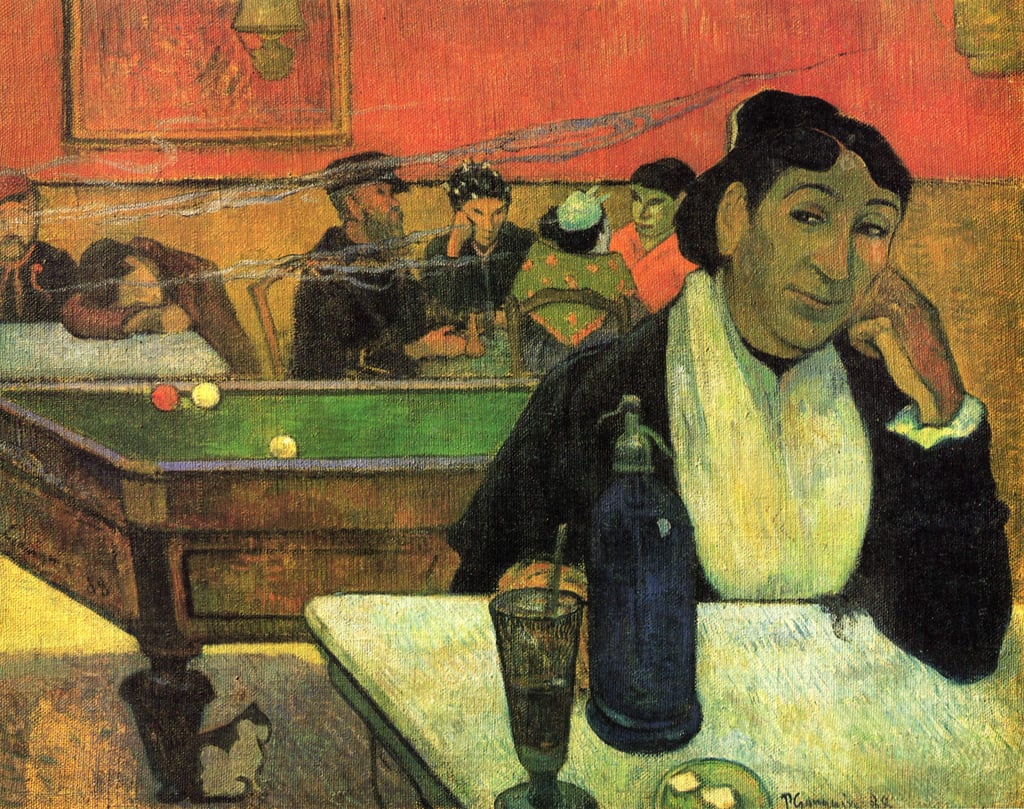 Symbolism was a broad artistic movement that encompassed painting, literature, music and theatre in the late nineteenth and early twentieth centuries.

Painting associated with the Symbolist movement, such as that by French painter Maurice Denis (1870–1943) and his compatriot Paul Gauguin (1848–1903), was often based on literary themes, myths and legends, but also on personal fantasy and dream. Denis philosophized that the need for realism in art could be downplayed in favour of the effects of line and colour. His paintings were of recognizable subjects – religious scenes, women in forest settings, bathers – but depicted in heightened, unreal colours bounded by flowing, decorative contours.

Gauguin, too, became increasingly dissatisfied with the purely visual emphasis of the Impressionist movement, and tried to introduce a greater degree of symbolism and spirituality into his work. He used strong, contrasting colours and dark outlines around the different elements of his compositions, drawing attention away from the subject depicted and towards the artist’s use of paint. Inspired by Japanese prints, he also developed a new style, coupling bold splashes of bright, unmixed colour with simplified, linear designs. Van Gogh (1853–90), as mentioned in our previous blog, was another leading Post-Impressionist painter who, like Gauguin, used colours symbolically rather than naturalistically. His emotionally charged works, bold simplifications of form and rejection of the Impressionist observational style helped pave the way for Expressionist art.

A striking tendency within Symbolist works was a move away from narrative in favour of the evocation of a mood or feeling. A common motif in Symbolist painting is a group of figures who do not interact in any straightforward way, whose eyes do not meet and whose gestures and gazes suggest that each one is lost in their own private reverie. The arrangement of a Symbolist composition can thus seem more artificial than truthful. In the works of Gauguin and Denis, this sense of artificiality is heightened by an emphasis on colour and line and on the ways in which different parts of the painting relate to one another within an overall ‘pattern’. 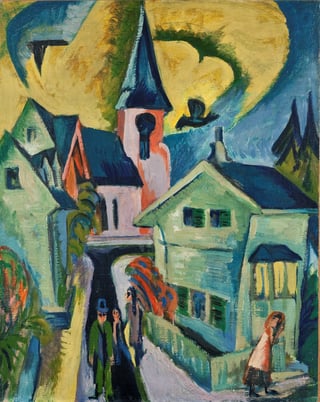 The Symbolist interest in colour as an evocative element in its own right was crucial to the development of the young French painter Henri Matisse (1869–1954).

A dominant figure in the Fauvist movement, Matisse learned a great deal from Gustave Moreau (1826–98), a Symbolist painter with a taste for exotic colouring. After trips to the Mediterranean, Matisse began to employ more vivid colours in his own paintings; using them to create an emotional impact, rather than simply to transcribe nature. He met the artists André Derain (1880–1954) and Maurice de Vlaminck (1876–1958) in 1899, and they gradually evolved a style that involved a radical and often savage use of contrasting colours. In the autumn of 1905, an exhibition of their works earned them the name ‘Fauves’ or ‘wild beasts’. This term, coined by the art critic Louis Vauxcelles (1870–1943), was intended as derogatory, a response to what he saw as a spontaneous and reckless handling of paint and use of colour. Matisse’s painting Luxe, calme et volupté caused a great stir when it was exhibited at the Salon des Indépendants in 1905, and is now seen as one of the key Fauvist works. The piece took its title from a refrain in a poem by Charles Baudelaire (1821–67), who was himself a Symbolist. The subject matter was ostensibly serene and restful – a lunch party on the beach – but Matisse’s handling of the paint and treatment of the human figure were expressive and almost violent.

Fauvism was characterized by a primitive style in which intense colours were used, often to create deliberate clashes. This technique completely freed colour from its depictive role, so that it could be truly expressive. Derain produced landscapes full of striking contrasting colours, reds and greens, which appeared to have been painted very freely and quickly, while Vlaminck aimed to express himself instinctively, after the model of Van Gogh. The Fauves generally chose traditional subject matter in their paintings – landscapes, nudes and portraits – which they made modern through their radical treatment. A powerful example of this is Matisse’s 1905 portrait of his wife, whose composition is brought to life by a bold green stripe extending down from her forehead and along her nose.

The move into Expressionism signified a shift towards the subjective experience of a piece of art – paintings became immensely expressive psychological profiles, rather than realistic, objective depictions. Their content involved skewed forms, emotive imagery, and fertile ground for individual interpretation. One early painter associated with the changing focus was James Ensor (1860–1949), whose work marked the transition from Symbolism to Expressionism. He was an early contributor to the Symbolist aesthetic through his use of corpses, grotesque masks and skeletons painted in garish colours, and his painting Christ’s Entry into Brussels in 1889 is widely considered as a precursor to Expressionsim. 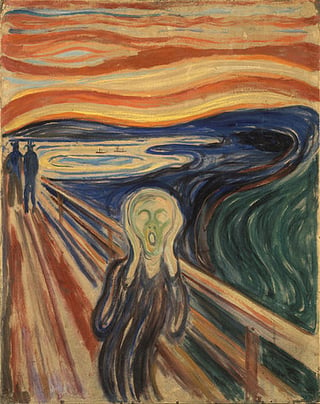 The Norwegian painter Edvard Munch (1863–1944) was a leading figure of the Expressionist movement. He studied in Christiania (now Oslo) and travelled in Germany, Italy and France before settling in Oslo. During his time in Paris (1908) he came under the influence of Gauguin and had immense sympathy for Van Gogh due to the bouts of mental illness that both of them suffered. Life, love and death are the themes that he endlessly explored in his paintings, rendered in an Expressionist symbolic style. His use of swirling lines and strident colours emphasize the angst that lies behind his paintings.

The group sought to give direct expression to human feelings, and the name signified the fact that they spanned the art of the past and present, and derived inspiration from a variety of disparate sources. They painted portraits and landscapes in bright colours with large, simplified forms, and were drawn to depictions of nudes in outdoor settings, suggesting a return to nature and to basic origins.

The term ‘Expressionism’ was first used in 1911, primarily in relation to art in France, and then to refer to the painters of Die Brücke, who by 1913 had drifted apart. It would continue to be applied to the work of artists like the Austrian Oskar Kokoschka (1886–1980) and the German painter Max Beckmann (1884–1950). Beckmann translated his traumatic experience during the First World War into distorted self-portraits and figure scenes, such as his disturbing vision of torture and murder The Night (1918–19). His later paintings depicted circus performers, with himself as clown or king, reflecting the anxiety caused by the social events that surrounded him. The artist Egon Schiele (1890–1918) developed a particularly stark style of Expressionism – distinguished by figures, often naked and usually emaciated – with harsh outlines, filling the canvas with contorted limbs and anguished features. A disciple of Sigmund Freud, Schiele sought to explore the deeper recesses of the human psyche, especially the sexual aspects.

The use of painting as a means of communicating personal experience and emotion – a central aim of the Expressionists – was manifested in a more subtle and controlled way in the work of the painters of the Munich-based group Der Blaue Reiter (‘the blue rider’). In an almanac published in 1912, the Blauer Reiter artists, including Franz Marc (1880–1916), Wassily Kandinsky (1866–1944) and Paul Klee (1879–1940), put forward their vision of new ways of self-expression, including art, design, poetry and music. Kandinsky’s painting, inspired by Fauvism, began to focus less on subject matter than on the lyrical force of colour and the strokes of his brush, seeking to communicate with the viewer in a direct and spontaneous way in the manner of a piece of music. Kandinsky’s works of 1910 to 1914, such as Improvisation No. 23, are considered to be the first abstract paintings of the twentieth century. 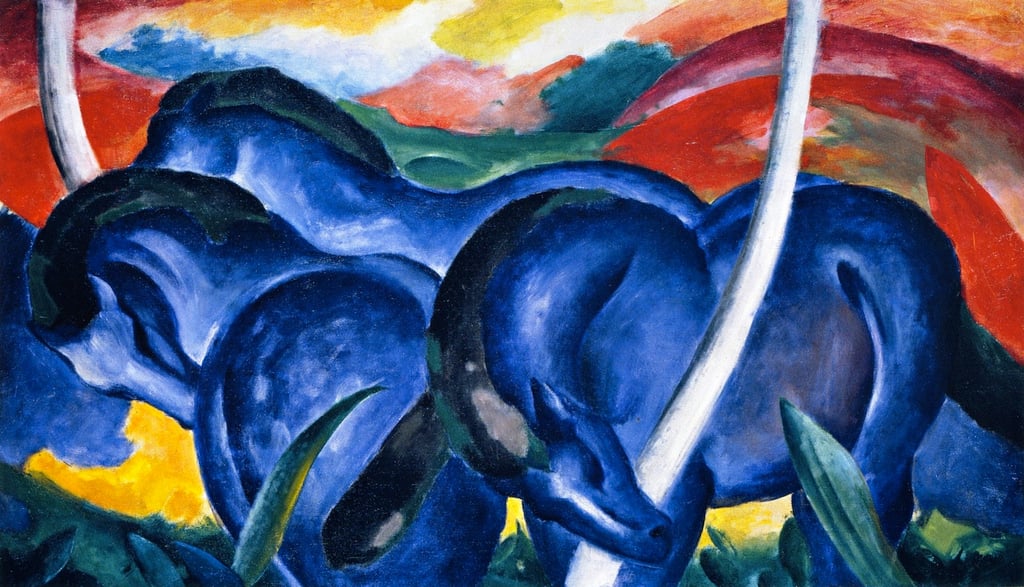 Confrontational, personal and emotive, Expressionist paintings and their roots in the ideals brought by Symbolism and Fauvism mark an exciting journey towards Modern Art. If you’re interested in the radical works that helped shape the Expressionist movement, then be sure to take a look at our luxury journals: our selection includes Egon Schiele’s Seated Woman, Van Gogh’s Sunflowers, and of course, Munch’s iconic Scream (see here).