Back before printers were churning out newspapers, reports and books or even before printing presses revolutionized the production of books and made books accessible to a larger portion of the public, illuminated manuscripts were the first type of books to be produced. Handwritten and a labour of love, these manuscripts are decorated with miniature illustrations in the borders, and even the text itself can be highly decorated.

Most of these beautiful manuscripts were created in monasteries, meaning a high number of surviving manuscripts are religious in content. These diligent, hardworking monks can also be credited with preserving Greek and Roman literature, thus saving the origin of today’s literature. Who knows where the literary world would be without those first examples of written storytelling?

Origins of an Art Form

The majority of existing manuscripts are from the Middle Ages. A few others have survived from the Renaissance, and those that preserved Greek and Roman writing came from the Late Antiquity era. These manuscripts would be handwritten and hand-painted on anything from papyrus to animal parchment to vellum. While most papyrus examples have decayed into only a few sheets here and there, most of the medieval manuscripts still around today have been identified as written on parchment, generally made of calf, sheep or goat skin. Illuminated manuscripts are generally examples of more important work, however, and therefore were worthy of vellum – a material made only from calf skin and generally more durable than other animal-skin parchment.

Because of the handwritten nature of these manuscripts, projects could take years to complete. In thicker books, a whole herd of calves might have been needed to provide enough vellum to use. These two factors were part of their high price. Owning or commissioning an illuminated manuscript became a mark of wealth among the ruling classes. Their illumination is unique to each text, but generally the embellished initial letters marked the opening of chapters or highlighted important passages while the illustrations were there to enhance or comment on the meaning behind the text. 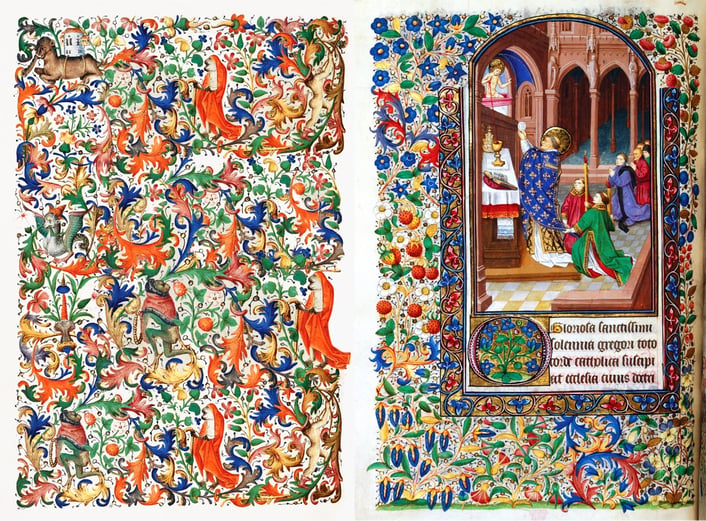 The painstaking process behind these manuscripts is just one of the reasons they’re so special. Another reason is the decoration of the binding, sometimes with important paintings on the cover but at other times decorated with jewels and gems. This practice led to the destruction of many manuscripts when the Vikings invaded and ripped apart the manuscripts for their jewels. Some that survived the Vikings’ greed are still missing their covers or are in pieces with whole sections of the books destroyed. At other times, these illuminated manuscripts were targets in religious wars, with opponents wanting to destroy all religious teachings of their enemies, despite the artistry that went into making them.

Illuminated manuscripts became less useful after the introduction of printing. The manuscripts dated most recently were made in the early sixteenth century, generally only commissioned by the very wealthy. Such manuscripts have always been a sign of wealth throughout their history and today they sell for millions of pounds at auctions. The manuscript most recently auctioned, at Christie’s in New York, went for £7.55 million. Their importance, whether historical, literary or artistic, remains assured, even in today’s world with the influx of printed text.

To read more about beautiful illuminated manuscripts, check out our latest Masterpieces of Art title 'Illuminated Manuscripts' (ISBN: 9781783612116), which documents the full history alongside a sample of dazzling manuscripts. Just click here.