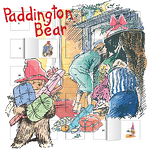 Later this month Paddington will be released. The small bear will find his way to the big screen in a family friendly adventure that we're extremely excited for.

Yet how has this marmalade-loving bear justified a feature film over 50 years since his debut? For one thing, Paddington has endured in the hearts of children and parents alike. Featuring in 70 titles, Paddington Bear books have sold over 30 million copies worldwide. With this feature film soon to be released too, perhaps we can look forward to a renaissance of Peruvian bear fandom.

On Track For Success

Now, there are no prizes for guessing where writer Michael Bond found his inspiration for Paddington Bear. That said, the story is still rather cute. It was Christmas Eve 1956 when Bond walked past a shop near Paddington Station; there was a lone bear on the shelf and so Bond bought it as a present for his wife.

This humble act led Bond to write a story about the lone Paddington bear. He finished the manuscript in ten days and handed the manuscript to his agent. in 1958 the world was first introduced to it's favourite cartoon bear in,  A Bear Called Paddington.

The story was of course altered from Bond's experience and as many may know, Paddington's origins are from Peru. Arriving in London with nothing other than his trusty suitcase and a label inscribed 'Please look after this bear. Thank you,' the scene is set for adventure. After being taken in by The Brown family his many books chronicle his adventures across the country.

You may have heard of the outrage earlier this week that the Paddington film has recieved a PG rating from the BBFC. The news stirred many to respond, claming that the ratings were too severe. Though yet to be released to public audiences, the BBFC intially defended their position by claiming the movie contained 'dangerous behaviour, mild threat, mild sex references, and bad language'. They have since curtailed their comments, saying that the swearing is 'infrequent' and using the word 'innuendo' in place of 'mild sex references'.

Despite all of this, of course children can still go see the film. It is just a shame that the recent build-up to the film's release has been soured by this seemingly dour outlook of a bit of fun. We can say with certanty that we have not been put off, let us know in the comments below if you're still planning to go and see the film.

All images taken from here

We're big fans of classic characters here at Flame Tree, which is why Paddington Bear features in one of our several illustrated advent calendars. Each panel contains a beautiful sticker for your family and the glittered cover is sure to make an impact wherever it hangs.

Let us know if you're planning to see the film by leaving a comment below!