Day of the Dead and Sugar Skulls | Art Calendars 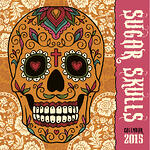 During these cold winter months, we thought we would spice things up a bit by talking about Mexico's popular festival El Dia de Meurtos, or, Day of the Dead. The Hispanic and Mexican holiday is a celebration of life is notable for the vivid colours and decorations that are created during its observation, perhaps most iconic are the Sugar Skulls that are made. Today we're going to talk a bit about the holiday and the sugar skulls that feature during it.

The indigenous people of Mexico perceive our deaths as a passing into a new life. Because of this the deceased would be buried with their personal belongings so that they would have them in the next life.

Nowadays, the holiday (observed not just in mexico, but also in most other latin countries) is an opportunity to remember and appreciate the dead. Think of it as a fun version of going to a graveyard. Instead of a sombre mood, the holiday is crafted around the idea of joyousness and celebration, creating a positive atmosphere for all involved.

The holiday falls on November 1st and 2nd because it's believed that the gates of heaven are opened at midnight, October 31st. The reason that celebrations occur over two days is because the first is for children's spirits to ascend to heaven and be reunited with their families, whilst the second day is dedicated to the adult spirits who come down and partake in the festivities.

The holiday can be an expensive indulgence for some families, with many spending over two month's worth of wages in the process of remembering the dead. This is partly due to the believe that 'happy' spirits will provide protection, good luck, and wisdom.

During the afternoon of the second day, the festivities move to the cemetery. There, families clean tombs, play simple games, or listen to music, the tone dialling down so as to better respect the dead.

The holiday coincides with All Souls, or All Saint's Day, an observance of the Catholic church. Over time the celebrations have been combined, with Day of the Dead becoming more and more observed in Catholic countries. As many of the underlying concepts are similar, such as respect for the dead, cleaning tombs, etc, this does not create much problem, however, the most colourful celebrations for which the holiday is known mainly only occur in central and southern Mexico.

Interestingly, sugar art was brought to the Americas by Italian missionaries in the 17th century. This is because the medium was used to create small figures of angels or lambs to decorate Catholic churches.

The format was popular in Mexico, due to their prolific sugar production and their inability to purchase expensive imported decorations from Europe. They learnt from the friars that came to their country and were soon making decorations of their own with sugar. The initial shapes were made using clay casts upon which the decorations were worked on. Skulls have become a significant symbol of the festival because of their representation of a departed soul. There's a variety of indosyncrasies across the innumerous designs output by Mexican natives, the only common theme being a vibrancy in colour. A sugar skull may bear the name of the person it's in memory of, a selection of colours that represent their personality, or perhaps some other unique affectation that the creator deems appropriate.

If El Dia de Meurtos interests you, or if you're just a big fan of colour, our 2016 calendar may be just the thing for you. Enjoy each month with a colourful design featuring one of 12 stunning sugar skulls, or sugar skull inspired design. Have a look at the art calendar on our website here.