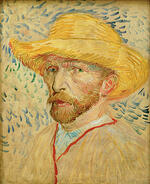 In his early years, van Gogh tried his hand at being an art dealer, a teacher and even embarked on life as a preacher. He worked at an art dealership and, after being transferred to London, fell in love with English culture and literature. This experience with art dealership enriched his knowledge of art history and exposed him to international trends. Among them, van Gogh was continually influenced by both Dutch and French technique.

In 1876 van Gogh lost interest in the art trade business. After suffering a breakdown he became filled with religious fanaticism and dove into a life of the church. He became a student of theology and began to follow in his father's footsteps to become a minister. True to his compassionate character, he became a missionary for the church and was sent to Borinage, an impoverished town in south Belgium. His experiences living amongst the people of Borinage are evident in his work. He incorporated images of hard-working peasants with work-worn hands in many of his works.

With encouragement from his younger brother Theo, who was an art dealer, van Gogh began to realize his artistic potential. Despite no formal training, van Gogh moved to Brussels to become an artist. After a falling out with his family due to outrageous behaviour among other things, van Gogh moved to The Hague, which was a popular artistic centre. The move allowed him to learn from other Dutch artists, bringing him one step closer to becoming an artist. 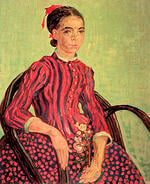 Van Gogh was not very successful in the romance department. Attracted by his nurturing nature, to women in trouble, van Gogh fell in love with a pregnant prostitute named Clasina 'Sien' Hoornik. They lived together for a year, and Clasina became a subject often featured in his work.

After moving to Arles, van Gogh convinced his friend and fellow artist Gauguin to come and live and work with him. During their time together, van Gogh suffered from varying types of epilepsy, psychotic attacks and delusions. As his mental state began to deteriorate, van Gogh's psychotic meltdowns became violent. In one violent fit he threatened Gauguin with a knife, an image his friend later painted. Van Gogh commented on the painting, that it was 'certainly me, but me gone mad.'

During this time van Gogh famously cut off a piece of his earlobe and offered it to a prostitute as a token of love. This incident landed him in a mental hospital for several months. After his release, he had difficulty regaining his life and willingly committed himself to the psychiatric hospital Saint-Paul-de-Mausole at Saint-Remy.

He spent one year at Saint-Remy, during which time he completed 150 paintings, most of which are considered today to be masterpieces. His brother Theo wrote in a letter:

'In all of them there is a vigour in the colours which you had never achieved before...but you have gone further than that, and while some try to attain the symbolic by doing violence to the form, I find it in many of your canvases in the quintessence... of your thoughts on nature and living creatures.'

Following his tragic death, van Gogh's work was exhibited in memorial to him by his brother Theo. One critic described his work as 'being in the presence of someone loftier, more masterly a person who disturbs me, moves me, commands attention.'

Today his works are endlessly reproduced and van Gogh is considered an artistic genius. Though his life was short and full of anguish and struggle, his work is a testament to his greatness. In life, he sold very few paintings, but today his work has been sold for record-breaking prices.

Though his life was short and tragic, van Gogh filled canvas after canvas with incredible art bursting with colour and emotion. For more about van Gogh and his incredible life, read our book Vincent Van Gogh: Masterpieces of Art by Stephanie Cotela Tanner and Susie Hodge (ISBN: 9781783612093). Find it on Amazon here.