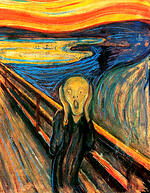 The Scream is Edvard Munch's most famous work of art. It is easily recognisable and eternally haunting. The figure at the centre opens its mouth in an almost audible scream of agony while colours swirl in the background. But what influenced Munch to create this masterpiece? With the upcoming release of our new book Edvard Munch: Masterpieces of Art, we take a look at Munch's life and the influences that led to the Scream.

Surrounded by Illness and Death

From an early age Munch was exposed to the agony of loss and the pain of illness. His mother died of tuberculosis when he was five and, years later, his favourite sister died of the same illness when she was 15. Munch himself was a sickly child, suffering in winter from chronic asthma, bronchitis, and rheumatic fever. His father was a religious fundamentalist, and Munch felt the nervous, almost psycho-neurotic, temperament of his father daily. He wrote: 'From him I inherited the seeds of madness. The angles of fear, sorrow and death stood by my side since the day I was born.'

This shroud of death and illness and madness set the stage for the development of Munch's own neuroses, which plagued him for most of his life. Much of his art was inspired by this neuroses, and some of his best works came from his attempt to recreate his pain and anxiety on the canvas.

The Scream had its base in a particular moment for Munch. He was walking toward town with two friends when the sun began to set. It was a time when he was plagued by an inner agitation which he described, 'it was a time when life had ripped my soul open.' To him, the setting sun looked like 'a flaming sword of blood' and bathed the hills in blue. He says ‘Witnessing these changes in nature proved overwhelming …the lines and colours vibrated with motion – these oscillations of life brought not only my eye into oscillations, it brought also my ears into oscillations – so I actually heard a scream – I painted the picture Scream then.’

The impressionist movement in France featured small, thin, and visible brushstrokes, open composition, light accuracy, ordinary subjects and unusual angles. At first Munch was impressed by this and felt himself an impressionist, but he soon decided that the movement was superficial. Munch wanted to create 'soul art,' an expression of the inner being of a person, like the inner turmoil of the Scream.

Munch consistently took stalk of his own psychological state of mind, revisiting key moments of his life and examining his self at that time. With this his works reflected moments from his past that would haunt him throughout his life.

Munch constantly worked and reworked his paintings. For some images he created as many as 30 different paintings, playing with colour and small changes. The Scream was no exception. He came back to this famous work many times, working through that moment in his life through art.

He created the similar piece, Anxiety, in an attempt to capture his feelings he had during the sunset. Both works are set on what appears to be a road or a bridge inspired by Fyodor Dostoevsky's (1821–81) Crime and Punishment, which Munch read when he was 22. It is clear these two different pieces are meant to portray the same moment, and it was Munch's way of working through his emotions as well as perfecting the image itself.

For years Munch toyed with the idea of creating a series entitled 'the Mirror' in which any viewer would be able to see themselves in his paintings. He exhibited some of the project, but it never fully came to fruition. Still, despite the darkness and turmoil present in Munch's works, they are relatable.

Perhaps you've never seen colours vibrate and heard an audible scream while watching a sunset, but the raw emotion, anxiety, fear, terror, that Munch has captured is itself relatable to us all.

Though Munch viewed some of his other works as pivotal to his artistic career, the Scream remains his most famous. It represents his childhood anguish as well as his adult neuroses and artistic expression.

You can read more about Munch in our upcoming title Edvard Munch: Masterpieces of Art, which you can preorder on Amazon here or from our website here [ISBN: 978-1-78361-356-4]. And if you’re a fan of Munch’s most famous painting The Scream, you might like to have a go recording your own interior thoughts in our Edvard Munch foiled journal, which is available now.