As winter chills the air and sheds leaves from the trees, rural settings takes on a new look before the advent of Spring. Yet they are no less intriguing for this change; in fact winter can heighten our sense of fantasy and magical occurrences through the longer stretches of night-time. We see this in the work of fantasy artists who embrace the colder seasons and use them as inspiration for compelling images of fairies and fables. Today we take a look at a handful of images inspired by end of year weather changes. Perhaps they'll even motivate you to render some art of your own. 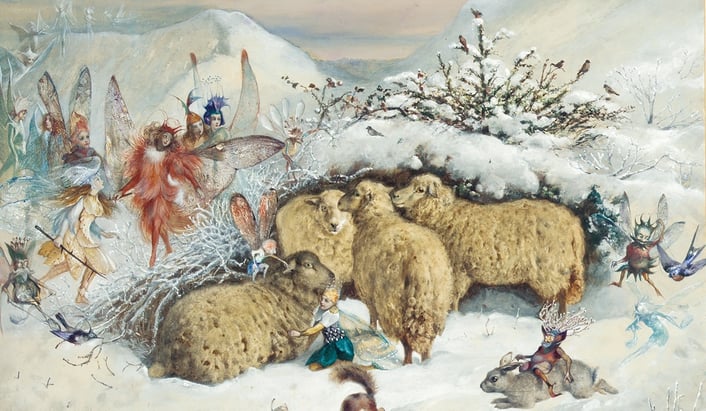 Fairies in the Snow

Whilst many of Fitzgerald’s pictures of fairies show them seemingly at war with their surroundings, he occasionally painted more optimistic scenes in which the tiny creatures seemed more in harmony with the world around them. This tallied with a view put forward by some writers, that the fairies belonged to a happier, bygone age, before the world became sullied by progress and materialism.

In this picture we see fairies playing with some sheep that have taken shelter from the cold snow. There is energy in the foreground as rabbits are ridden like bicycles, but the tender care taken with the sheep communicates a calmer sense of tranquillity. 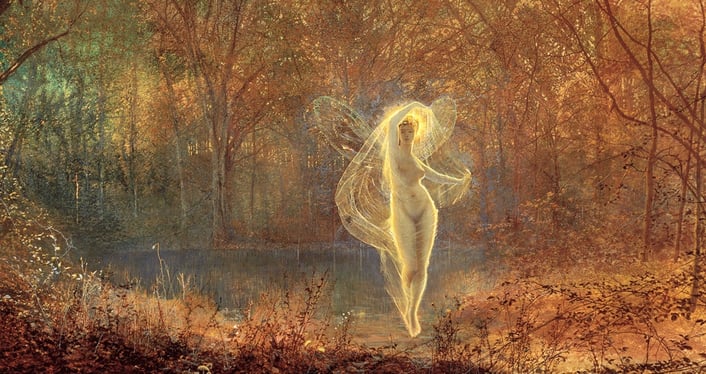 During the 1870s and 1880s, Grimshaw produced a series of fairy pictures, all ostensibly drawn from literary or Classical sources. Here the title comes from an old ballad, although the artist was probably more interested in creating a wistful personification of the season itself. He saw it as a time for melancholy reflection, epitomized by such pictures as Autumn Regrets and Meditation.

This piece is fairly unique, as nudes are rare in Grimshaw’s work. In Victorian England nude depictions were seen as controversial, but due to the fairy subject matter and lyrical colouring his pictures largely avoided censorship. Problems normally only arose when a nude was painted too naturalistically, or if it was too readily identifiable with real women. But as seen here, hovering above the earth and shrouded in magical light, Grimshaw's ethereal figure is clearly far removed from any grounding in reality. His fairy shines as a beacon of beauty amidst the dry surroundings, enhancing the dull browns of the trees into spectacular, deep oranges. 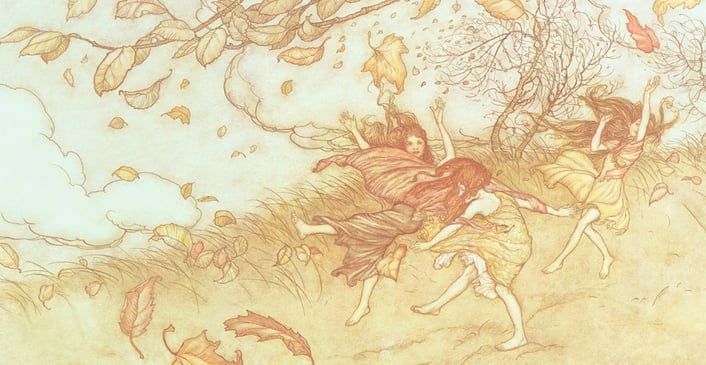 Another autumn image, this illustration is taken from the 1906 edition of Peter Pan in Kensington Gardens. It depicts a passage where the narrator explains how fairies hide themselves from humans (one of their most effective ploys was to disguise themselves as flowers). Tailored in clothes to resemble everyday plants, these fairies are able to effortlessly blend in with hyacinths and crocuses - some of their favourite flowers.

Here we see a handful of fairies mimicking the actions of autumn leaves as they dance around in the breeze. When tackling pictures of this kind, Rackham always tended to draw the background first, adding in the figures at the final stage. Although he generally planned out a rough idea of the composition he never produced detailed studies, preferring to paint quickly and spontaneously. A friend remarked that he resembled a goblin “hopping about the studio with a palette on one arm, waving a paintbrush in his hand”. 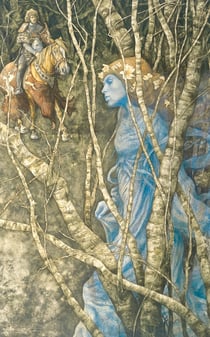 Female fairies were often seen as great seductresses, captivating men with their beauty. However, romances between mortals and fairies were perilous affairs, usually doomed to end in failure.

Whilst male elves were normally depicted as squat and ugly, their female counterparts were very different. Under moonlight, in particular, elf maidens had a shimmering allure that most men found irresistible. That is what we see in this image, as the Elfin Maid glides through naked winter trees.

Froud's work has reinvigorated the fairy genre, taking it out of the nursery and returning it to the adult world. His work has a particularly strong appeal for New Age enthusiasts, with their interest in Celtic myths, traditional folklore and alternative forms of spiritual belief. Some of his subjects have a medieval flavour, which harks back to the Victorian taste for Arthurian themes, but is also reminiscent of the contemporary movement by the Brotherhood of Ruralists.

Which picture was your favourite, or do you have a favourite fantasy artist that is missing from this list?

Let us know in the comments below.

You'll find even more astounding fantasy images in our beautiful large-format book, Fairy Art. Packed to the brim with incredible high-quality images, information about artists and much more, this is the perfect gift for the fantasy lover in your life. Take a closer look at the title here.