Origins in Japan and China

It was the medium used by the artists of China and Japan from the third century AD, if not earlier, and appears to have developed in India and Persia about five centuries later when the rulers of Turkestan began commissioning Chinese artists, from whom the technique spread further west and south. Interestingly, some of the earliest watercolours of China have an affinity to the tempera of the Mediterranean civilizations, although subsequently the Chinese preferred clear watercolour to the opaque forms associated with tempera. Just as the brushes used by European painters were made of sable or hogs’ hair, depending on the quality of work desired, so too the Chinese used these materials in their brushes, but with the salient difference that the latter were infinitely finer as befitted the extremely delicate nature of their brushwork. By these means, Chinese painters and calligraphers achieved an extraordinary range of styles, from the most refined, almost microscopic styles to coarse, vigorous forms.

Another important difference between Chinese and Occidental painting was that the Chinese were primarily concerned with design, while colour was always of secondary importance. The versatility of watercolours was suited to the materials on which they were executed. Whereas Western artists relied on wood panels and canvasses, the Chinese preferred paper and silk panels from the outset. The earliest papers were relatively coarse, and were fashioned from the bark of certain trees. Later came a type of paper made from silk fibres and later still a very tough, hard rice-paper. Then sheets of silk were glued to layers of paper and this seems to have proved to be the most satisfactory medium, for it remained more or less constant for many centuries. Black ink was mainly employed although deep shades of sepia were also used, but under the influence of Buddhism sumptuous colours were introduced as well as a lavish use of gold leaf. Poetic suggestion rather than representation was the watchword of Chinese watercolour compositions in the Song dynasty. An interest in landscape also developed and would become the dominant feature of later Chinese art. Colours were now more subdued and used sparingly. Having reached the acme of perfection around AD 1000, Chinese watercolour painting remained relatively static for centuries, and the hand-scrolls and wall-hangings executed in this medium continued with little stylistic difference until the influence of Western art began to make itself felt at the end of the nineteenth century.

Diffusion of the Chinese Style

The technique of watercolour painting spread to Japan in the middle of the sixth century and, until about AD 850, slavishly followed Chinese patterns and techniques; but then there began to develop a distinctly Japanese style which was encouraged by the establishment of a number of schools. There was a revival of the Chinese style from the fifteenth to the late seventeenth centuries, when a new popular style emerged. This gradually gave way to a more naturalistic style, influenced to some extent by ideas brought by the Portuguese and later the Dutch from Europe but harnessed to the particular parameters of Japanese watercolour painting. The heyday of the Japanese watercolour was from the late seventeenth century onwards, following the establishment of the art school founded by Hishigawa
Moronobu (1646–1713). Landscapes, portraits of the actors of the Kabuki theatre, geishas and court scenes which make up the Ukiyo-e (‘pictures of the floating world’) formed the bulk of watercolour painting and inspired the production of block prints which were hand-coloured. From about 1875, Western influences in watercolour painting can be detected in the greater use of chiaroscuro and linear perspective, as well as a greater concentration on the exact reproduction of form, a matter which had previously been of secondary importance. 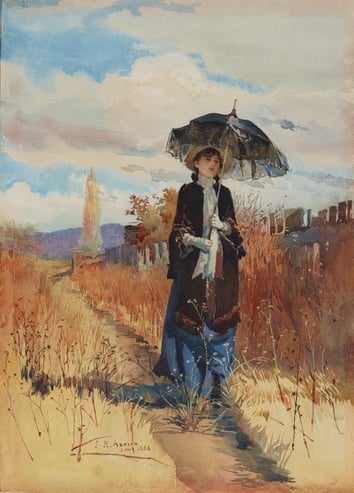 The Persians learned the technique of watercolours via the Chinese artists who brought their craft to Turkestan, but very little appears to have survived from this early period. Even watercolour miniatures from the period of the Mongol invasions are very rare. At Herat, however, a great school of art was founded in the fourteenth century and from this developed the exquisitely jewelled manuscripts that reached their peak of perfection in the time of the Mughal emperors and accompanied them southwards to India. In the period from the sixteenth to eighteenth centuries Indian watercolour art expanded to include small-scale murals executed on paper and employing the techniques of fresco and tempera as well as clear colours. Various methods of treating or glazing the surface of the paper evolved, mainly in order to enhance the appearance of portraits.

Watercolour painting developed in Europe during the Middle Ages and was widely practised in monasteries and other religious foundations. The vast majority of these miniature paintings were executed on parchment, seldom as individual works and generally forming the embellishment of manuscript books. An offshoot of this was the development of the portrait miniature, done on smooth card or small ivory plates, with watercolours being the preferred medium.

Watercolour sketches and preliminary cartoons are known to have been produced by some of the greatest masters, from Peter Paul Rubens (1577–1640) and Rembrandt (1606–69) to Albrecht Dürer (1471–1528) and Honoré Daumier (1808–79), but the watercolour as an art form in its own right only really came to prominence in the second half of the eighteenth century. What started as an amateur pastime was given a much higher status in the hands of such artists as Paul Sandby (1725–1809), Samuel Scott (1710–72) and Thomas Malton (1748–1804), the last-named producing some remarkable pictures of architectural subjects. The heyday of the English watercolour ran from 1780 until 1850, and produced some landscapists of the first rank, such as John Robert Cozens (1752–97), Peter de Wint (1784–1849), John Sell Cotman (1782–1842), Thomas Girtin (1775–1802) and Cornelius Varley (1781–1873). But the most prominent artist who may be said to have made the watercolour his very own medium was J.M.W. Turner (1775–1851), and it would be true to say that his exploration of the techniques of this medium considerably enhanced his work in oils. The range of his watercolours is incredible and reveals Turner as a bold and imaginative innovator. In the second half of the nineteenth century and the twentieth century, watercolour was an important aspect of British art in the hands of such painters as Sir William Orpen (1878–1931), Samuel Palmer (1805–81), Julian Ashton (1851–1942) and many others. Nor should it be forgotten that watercolour was extensively used by the Pre-Raphaelites and their successors, notably Sir Edward Burne-Jones (1833–98), whose paintings in this medium have an exquisite jewelled quality. 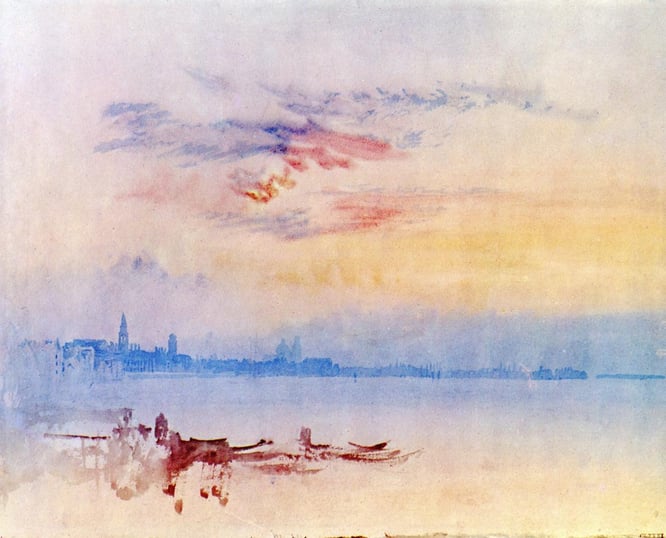 If you're just starting to find your feet with your own artistic endeavours our book How to Paint Made Easy comes out at the end of the month and can give you some great tips and tricks to get started on creating beautiful paintings. Alternatively, if you'd prefer to stick to reading about the masters our J.M.W. Turner Masterpieces of Art book is a great way to delve into his life and works.