Utagawa Hiroshige, the Origins of a Master | Art of Fine Gifts 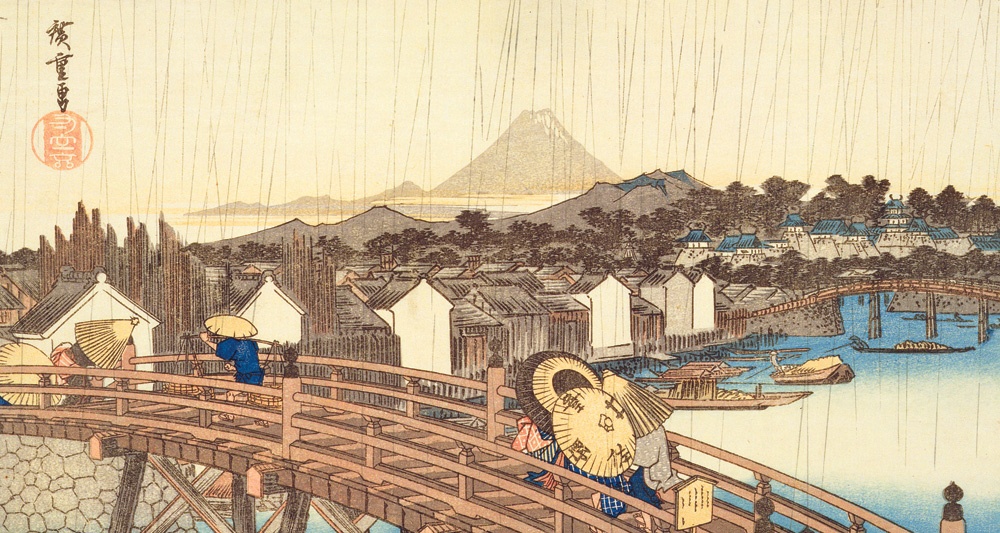 With over five thousand woodblocks to his name and celebrated for his breathtaking landscapes, Utagawa Hiroshige (1797–1858) is often said to have been the last of the great art masters of his time. In Europe and the United States, Japanese woodblock prints are usually thought of as decorative pieces rather than fine art; such terms as ukiyo or Edo bakufu do not mean much to most of us Westerners. But in order to fully understand Hiroshige’s work we have to go back a few decades before his birth, to 1603 and the beginning of the Tokugawa shogunate.

In the early days of the seventeenth century in Japan, Tokugawa Ieyasu seized power after almost half a century of civil conflict between several feudal lords. He established a full-on isolationist policy, closing all of the trading doors to outside customers with the sole exception of the Dutch East India Company who could still do business with Japan through the port of Nagasaki. Inhabitants were not allowed to leave and travellers were not allowed in; this resulted in the rest of the world having very little knowledge of what was happening in Japan and vice versa. Shogun Ieyasu wanted a brand new Japan and he decided to underline this by making the small town of Edo (now Tokyo, literally the ‘eastern capital’) the centre of his bakufu ('government') instead of Kyoto where the Emperor lived. In 1657 a fire destroyed most of the town and its reconstruction was axed around the new bourgeoisie emerging from the many changes in economy at the time. By the mid-eighteenth century Edo saw its population go from that of a small village to over a million inhabitants. Merchants who were at the bottom of the social hierarchy until then had suddenly become the wealthiest group of the middle classes, but they could neither travel nor expand due to the commercial isolation of Japan.

If you like Japanese Woodblock you'll love our beautiful art book. Click here to take a closer look.

The middle classes began enjoying their newfound prosperity through the hedonistic lifestyle that would be at the centre of Japanese society throughout the Tokugawa shogunate. This lifestyle gave birth to a new art movement revolving around pleasure and luxury. It was called the ukiyo, the ‘floating world’. The seventeenth century was also the theatre of a rise in literacy and therefore a rise in the people’s demand for books. Since woodblocks were quicker for the artisans to make, they soon became the norm, with the first polychromatic print being produced by Harunobu in 1765. The ukiyo-e images were representative of the middle classes and of their indulgences. They depicted beautiful, fashionable women (bijin-ga), performers of the Kabuki theatre and erotic scenes (shunga). The area of New Yoshiwara in Edo was the ultimate destination for pleasure-seeking hedonists in Japan: it became the social centre of both the wealthy and the educated. Most of its residents were geisha, yuma (bath girls) and courtesans offering company to visitors of their demimonde, a world in between reality and fantasy where men could be granted their every wish.

However, during the 1790s, censorship came to Edo in the guise of the Kensai Reforms and the ukiyo artists began focusing on harmony and beauty rather than on the demimonde. Utagawa Toyoharu was one of the first Japanese artists to use perspective in his woodblocks and he introduced landscape painting as a subject where it had only served as background until then. Toyoharu was also the founder of the Utagawa School that saw Hiroshige make his first steps as a woodblock painter.

Our next blog will take a look at Hiroshige's two most significant bodies of work, the Thiry-Six Views of Mount Fuji and One Hundred Famous Views of Edo. To ensure you don't miss out, pop your email into the subscription box in the sidebar so that'll you be notified when the next post goes up.

We're proud to feature Hiroshige's stunning work on several of our foiled journals. To take a closer look at the designs (going from left to right) click here, click here, or click here (BONUS: click here to see our new sketch book).