This week marks the release of our February titles! To celebrate, we are releasing Q&As with each of the authors so make sure you check back each day this week to get to know the writers and their books a little better. To kick of our Q&As we asked Jonathan Janz about his new to Flame Tree Press title, The Nightmare Girl.

It’s about a good man who gets punished for doing the right thing. He, his family, and everything he loves are jeopardized by a group of very bad people. Specifically, he runs afoul of an ancient Irish fire cult that believes in renewal through fire (especially human cremation).

What would you say are the underlying themes of the book?

No good deed goes unpunished, I suppose, would be a major theme. So too would the difficulty a parent feels in balancing healthy fear with outright paranoia when it comes to his child’s safety. Lastly, the question of when violence is necessary is central to this story.

The setting is basically my house and my neighborhood. Joe, the protagonist, lives in my house, and the climactic scene takes place at the house next door to ours. It made the writing of the book fairly easy in that regard. And a little scary.

What are some of your favorite books about cults?

Rosemary’s Baby would have to be near the top. In fact, Brian Keene called this novel “Rosemary’s Baby on crack.” Another would be the John Farris novels Sacrifice and All Heads Turn When the Hunt Goes By. Also of interest would be the film The Wicker Man.

Who and what influenced you most in the writing of the book?

Joe R. Lansdale is one of my primary inspirations, and this book is partially an homage to him. That means I tried to capture the flavor of his Hap and Leonard novels, as well as some of his other suspense books like COLD IN JULY and LEATHER MAIDEN. The combination of suspense, humor, and western/southern sensibility added a great deal of texture to this story. Fans of Hap and Leonard will also spot a few Easter eggs (including a cookie-eating scene featuring Joe, Daryl, and Michelle--my characters--that was directly inspired by some of Lansdale's scenes featuring Hap, Leonard, and Brett Sawyer, Hap's main love interest).

Regarding images and other literary works, I studied quite a bit about fire and its role in cultures, cults, and mythology. I also studied a lot of Celtic mythology, as it was pertinent to the book. In addition to being inspired by certain visual representations of the goddess Brigid I found online, I learned a bit about fire worship from MAN, MYTH, & MAGIC, which are indispensable resources I often reference in my writing. In fact, the epigraph at the beginning of THE NIGHTMARE GIRL comes from MAN, MYTH, & MAGIC.

Thank you to Jonathan for taking the time to speak to us about his writing practices, his inspirations and telling us a little about The Nightmare Girl. You can pick up this new FLAME TREE PRESS edition of his book, along with the other February releases, from Thursday the 14th February 2019. It will be available in paperback, hardback and ebook. Check out our website for details. 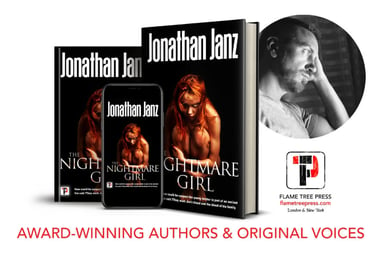