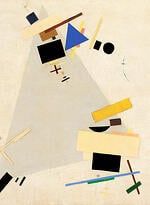 Suprematism was a natural destination for Malevich – after absorbing the delvelopments of impressionism and then cubism, he had begun to question the purpose of art, to see that a work of art could exist for its own sake instead of merely attempting to replicate reality. After experimenting with cubist near-abstraction, he arrived at the world of geometric shapes and limited colours that would be his trademark, as his way to achieve 'the primacy [aka 'supremacy'] of pure feeling in creative art'. For Malevich, the shapes and interacting forms on his canvases became not about aesthetics but about feeling – in fact, a very spiritual kind of art. In 1915 he articulated the concept in his manifesto From Cubism to Suprematism.

It would be remiss not to mention Malevich's most iconic painting, of 1915 (though the artist dated it to 1913 as that was when he first had the idea); the one that started it all, the first ever completely abstract, non-representational painting. So familiar to us now, it is hard to appreciate its radical nature: a plain back sqaure atop a larger white one, calling to mind fundamental existential concepts of absence versus presence, negative versus positive. Of course its surface is cracked and perhaps it is embued with rather more 'character' than Malevish intended – indeed, he later painted three other versions to exhibit instead – but contemplate it for a little while and it still remains a confounding piece of art.

Here the artist continues his celebration of purely abstract geometric forms and their meditative quality, but embues his canvas with a vibrantly kinetic energy, as a multitude of forms push and pull to create the dynamism of the title. 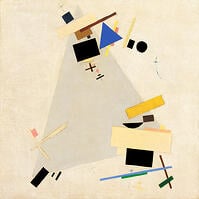 Colour is reintroduced too – I can count at least eight, ranging from black, white and grey to peach, blue and green – forming a pleasing composition that feels both balanced and teetering on the brink of explosion at any moment.

The movement and life of this painting – where the triangles, circles, and oblongs seem to throb with their own source of power – is proof of the possibility for almost living, breathing artworks that exist entirely independently of nature and the animal world around us

Going even further than Black Square, in 1918 Malevich painted White on White. For the time at least, it pushed the boundaries of art past where anyone could imagine. He has seemingly stripped art of everything, even colour, with a white square resting on a slightly warmer white square.

However, it is not as pure and clinical as you might think – from the jaunty angle of the asymmetrical floating square to the visible texture of brushwork. Nonetheless it achieves the feeling of boundless freedom of expression and spitituality that the artist was striving for.

If you would like to be able to contemplate more of Malevich's iconic abstract works, as well as some semi-figurative cubist pieces painted around the same period, then hang our art calendar produced with Tate on your wall: Kasimir Malevich Tate Calendar 2015 – available here. 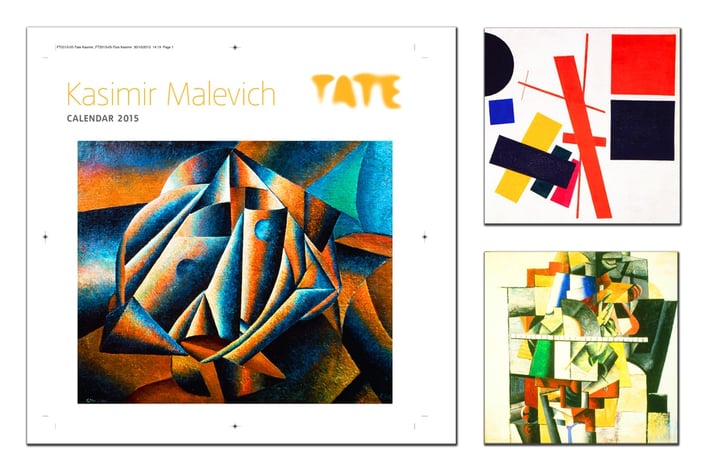