Now available to buy, American Gothic and Urban Crime are the two latest anthologies to join the ranks of our popular Gothic Fantasy titles. In keeping with the rest of the series, the collections combine themed short stories by contemporary writers with older texts that have helped shape the genres as we know them today. As a way to introduce the fascinating mix of stories at work in American Gothic, we asked the modern authors to reveal how the germ of their story ideas took root... What was the inspiration behind your American Gothic story?

The inspiration for ‘Stone Baby’ was a news story I read online about a woman in China who had been found to have a ‘stone baby’ (calcified fetus) inside her uterus for 45 years. I had never heard of this phenomenon (which turns out to be real) and I was horrified – and fascinated. From there, the story just developed naturally.

Back in 1960, when I was fourteen, I bought the very first British paperback of Lovecraft’s tales, Cry Horror. I read it in a day and felt steeped in Lovecraft’s vision, and his achievement was what I wanted to aim for. The inspiration for the tale was the Necronomicon quote that appears at the start (from Lovecraft’s story ‘The Festival’). I imitated Lovecraft’s purplest prose, of which there’s far less than many people think. I was fifteen when I wrote it, and I hope my enthusiasm overcomes some of the adolescent overwriting.

The monster in my story draws from two sources, one being my own experience with insomnia. I wanted to give my insomnia a physical manifestation; if sleep deprivation could walk and talk, what would it do? What would it desire? The other source is the myth of the night hag, a demon who crouched on her victims' chests as they slept. She was an ancient explanation for sleep paralysis.

Family! I’m from a huge Azorean-Portuguese family. Azoreans have such respect for death. I grew up curious about it. My grandmother in particular is very Catholic but holds her superstitions just as close. I was raised to believe in Jesus, sure, but also that a clove of garlic between the open blades of a pair of scissors would stave off evil intent. I wanted to explore that line between sacred and sacrilegious in my culture.

This story was inspired by some family history and the folklore of Northeastern Missouri. Plus a lot of road trips to small abandoned towns and growing up in a state where the Civil War started ten years early.

Russell James – In the Domain of Doctor Baldwin

The American Civil War has always been a fascinating era for me, the strange mix of societal civility and amazing carnage and cruelty. I'd recently toured the restored Andersonville prison camp in Georgia and been horrified at the conditions the prisoners had lived under. I decided to write a story that worked in part of their plight.

Zombies have always creeped me out. I enjoy monsters, boogeymen, eldritch horrors, and anything in between. But zombies? Ick. I needed a story to submit with my application for the Odyssey Writing Workshop some years ago, so I decided to dig into my aversion to zombies. I was also going through a sad period in my life, so, as these things do, everything married up and this story clawed its way to the surface.

This story was inspired by the old Victorian house where my grandparents lived. It was elegant and beautifully designed, but as a kid I also found it cold and austere. There were rooms set at odd angles and strange hidden passageways. It was not a place for children. As for the characters in the story, one might wonder if Viola was in any way inspired by my grandmother. If she was, I'm not saying. She may have passed several years ago... but she might hear me.

Madison McSweeney – The Outsiders in the Hawthorne Tomb

After seeing the American Gothic submission call, I set out to write a tale rife with classic gothic themes (death, decline, family curses) and macabre imagery, as well as oddball characters and some dark humour. Stylistically, the story ended up absorbing a lot of influence from H.P. Lovecraft and Salem’s Lot by Stephen King. The mythology was inspired by an earlier short story of mine, ‘Behind the Music’, which featured an eighties rock star transforming into an arachnoid creature.

‘Big, Bad’ is my take on ‘Little Red Riding Hood’. It was inspired by growing up in a small town in south Louisiana during a time of severe economic hardship. In the early 1980s, it was an area mired in poverty, hopelessness, and, increasingly, drug addiction. Ruby is one of those tough, resourceful young people who find a way to survive that kind of situation.

Catering to my particular artistic fixation, a friend gave me Steven Biel’s book American Gothic: A Life of America’s Most Famous Painting. Biel discusses how the Eldon, Iowa, home that inspired Grant Wood’s masterwork has become a popular attraction, with visitors typically striking the pose of the iconic couple when taking photos. My story began to frame itself as I speculated: what if the ‘American Gothic House’ proved more of a tourist trap than anyone realised?

Christi Nogle – In the Country

The opening of this story was inspired by John Singer Sargent’s painting Carnation, Lily, Lily Rose, in which two children light paper lanterns against a background of dark greenery and flowers. The light in that painting and the moment captured are so sweet and beautiful, I always wondered what was going on outside the frame.

‘Baby Teeth’ came from a picture I saw of a child's skull in a museum, where the adult teeth were still stacked on top of the milk teeth. The image of that skull followed me around and I started thinking, what kind of child might have even more teeth than that?

In the spring of 2017, the science behind the ‘old book smell’ briefly trended. I love collecting sensory details for future stories, and so read a few articles intending to take notes about the differences in scent between certain types of decaying glue and paper. My real takeaway, however, wound up being the concept of ‘book death’. It got me thinking: there are countless stories about dead humans – what about dead books?

I’d written a trio of stories that featured, serendipitously, Earth, Air, and Fire. Obviously, it was Water’s turn. Then I stumbled across the American Gothic theme, which screamed Grant Wood’s painting of the same title. Sparked by Wood’s iconic image of a farmer and his wife (sister, actually) and with water still on my brain, I envisioned a more modern patch of farmland with a recalcitrant pond, a dwindling puddle in America’s heartland that cried out like a canary in a coal mine. Only the fretful wife of this farm’s somewhat dense overseer seemed able to divine the pond’s signals, and as I wrote, I, too, strained to hear what it was saying. The result was ‘Water Witch’.

I was in Baton Rouge, Louisiana for a film festival. On an off day, we travelled south and took a bayou tour. I'm endlessly inspired by nature, and I love the sense of primordial mystery conjured by that whole region. So I brainstormed a story that would pay homage to the inspiration I got watching those variously-sized gators cutting ominous Vs in the murk, or snapping up scraps thrown their way.

My story was inspired by my thinking about two classic themes in gothic fiction: the gothic double, and domestic entrapment. Specifically, I wanted to explore the ways in which a woman finds her dreams derailed and her personality subsumed by a toxic, psychologically abusive relationship... and doesn't find much support for escape because the abuse is subtle and slow-building: superficially her abuser looks like an ideal match, and her family and community have all bought into the idea that a married woman is expected to sacrifice herself for the sake of her relationship. 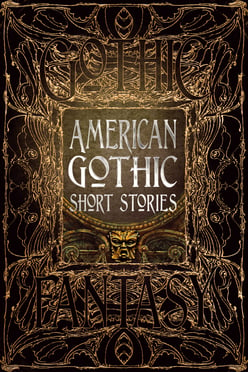 The story was generated by a prompt from the Fright Club writing group run by Moaner Lawrence through the HWA. The prompt got me thinking in different ways. The toads are creepy and unusual, but not the scariest thing in the story. Granny knows the dangers of the family skill and tries to groom Patsy to use it responsibly. But Patsy discovers the heady excitement of such power.

There is a huge beech tree in my garden. It's over 200 foot high and about 150 years old. During the day it's teeming with life: birdsong, the drone of insects, the chittering of squirrels. But at night it becomes a different beast altogether. Everything is so quiet and still. Absolutely silent. A black silhouette of tangled branches against a moonlit sky. Something about it is so incredibly... unnerving. Chilling. It strikes a chord. Thus, it became the centerpiece of ‘The Hollow Tree’ (although, I should note, in the story it became an oak).

You can read these stories and more in American Gothic Short Stories, which is available to order through our website here!