Chop Shop is about two funeral home employees who, after a run of financial trouble, decide to start selling human body parts on the black market to make ends meet. Naturally, the people that traffic in such things aren’t very nice people and the funeral home employees, unfamiliar with the hard-nosed workings of criminal organizations, find themselves far out of their depth very quickly. It’s a comedy. I’m not sure all the talk about body parts made that clear, ha.

Greed. Greed and how it can very quickly confuse one’s moral compass and make someone look at an act—such as selling human body parts—as an acceptable to do when there’s a possibility of a generous payday on the horizon. Some of the characters start out seeing no value in human life, others do see some value in life but eventually lose it, even in regard to their own life. Some regain the ability to see that value by the end. Some.

I did, in fact. Not personality-wise but a character trait let’s say. So, in Chop Shop, there’s a low-level drug dealer character named Shawn who gave himself the nickname Slug. And he will never be able to forget that his nickname is Slug because SHAWN AKA SLUG is tattooed on his forearm—which another character finds absolutely hilarious in its blistering stupidity. And while the name (and nickname) are different, there was an individual of whom I was acquainted who voluntarily, mind you, got [HIS NAME] AKA [HIS NICKNAME] tattooed in Old English typeface down on his forearm. Biting the inside of my cheek: “Yeah, man, it looks great. Really cool. Yes, I’m serious.” It just had to go in.

Read a lot. Think about what you want kind of stuff you want to write and read a lot of that then read stuff completely different from that, too, because that can really open your head up a lot. Know that all first drafts are inherently bad and it’s in the re-write that what you wanted to say—and may have thought you did say in the first draft—will start to materialize. Read it out loud. Print it out and red-line it that way, you’ll catch more things the more different angles you can look at a thing. Prepare to get rejected, a lot, regardless of how good you are. For example, this novel, Chop Shop, has been in the works in one form or another for over a decade. So, perhaps patience is another tip. And last and most importantly, I feel: when querying to agents or editors be nice regardless of whether they take on your manuscript. Publishing is a surprisingly small industry. People talk. And it’s a much more preferable to be a forgettable polite person than a memorable snarling writer who can’t take rejection. And stay far, far away from social media and “binge-worthy” programming—they are not your allies, said the old man with the tinfoil hat on.

I have a scary basement that suits my writing needs quite well. Our house was built in 1880 and we’re fairly certain it’s (benevolently) haunted. So, with a ghost over either shoulder, I write in a basement next to the water heater, usually covered in spiders. I’m a very sedentary writer. Some writers can take their laptop and write in a coffee shop or at the library, but even though I have a laptop—and therefore could be mobile—I still write like I’m shackled to a radiator.

Music is very important to me as a writer. I always have what I call a “hook song” attached with anything I’m working on. Either it strikes the right atmosphere I’m trying to create or it’s a song that just feels like the book—if that makes sense. I’ll listen to that song while coming up with ideas—usually out on my porch staring at nothing with headphones on, which I’m sure has probably gained me a reputation in the neighborhood. But once the hook song is established, synonymous with the world of the book, I can go back and listen to it if I feel I’m losing the thread or if I had to spend some time away from the manuscript, it just pulls me right back in. And when it comes to constructing characters, I often make a soundtrack for each one, either stuff they’d listen to or songs that reflect their personality. And when it comes to actually getting down to the writing itself, I like listening to spooky ambient music, especially when working on more suspenseful scenes. The musician Iron Cthulhu Apocalypse could arguably be credited as a cowriter on many of my books because I listen to their tracks so often while writing.

It depends on the scope of the project, in both cases. Stories with fewer characters facing a straight-ahead plot objective can flow pretty easily in both the writing and the edit. With a more complex plot with multiple POV characters who are all doing different things in different places and have intersecting appearances in one another’s plots . . . it can become quite a tangled thing, both in the writing—and the edit, because that’s when Mr. Plot Hole rears his ugly head. Like anyone I go weeks thinking, Well, it looks like the well’s run dry; that last thing I wrote was the last thing I’ll ever write. And then I’ll be listening to a song or driving somewhere or considering which toothpaste I want to buy and bang, like lightning there’s a new idea that’ll just unfold and unfold—so fast, sometimes, I can barely take notes quick enough. But those dead times, man, they can be really scary.

Personally, I love it. It’s such a unique relationship. Editors’ styles vary so widely; like writers, some will zero in on the language to make sure things sound good and flow together nicely while others are much more plot-focused. I like harsh editors. A giant red X on a page (or several pages in a row), to me, is sort of a masochistic thrill. It’s a matter of opinion whether anything on those pages held any value to the reader, sure, and writers have a tendency to get up their own backside about how imperative that flowery description of a dress or the sound it made when the gruff old man slammed the hood of his now-confirmed dead pickup, so an editor needs to come in, look around, and start pointing at things that need to be shown the door. A book doesn’t just get spat out whole by an author. It’s considered a very solitary thing—writing and writers in general often get that romantic misconception heaped onto them—but it’s not solitary, not when someone is willing to publish your work that, while you may have spent a lot of time alone with your ideas and characters, when it’s time to get it into reader-worthy shape it becomes a group effort. And for good books to exist, editors are arguably more important than the writer. A writer says editors are more important than the author? What, what? Yes. Because when we are talking about publishing material, it needs more than one set of eyes on it for it to be worthwhile to the reader. I don’t care how good anyone thinks they are, they need an editor. You can’t catch everything. A typo or a terminal case of plot lumpiness can rip a reader right out of a world that had been, up to that point, deeply engrossing. It’s like a record skipping. You can’t dance to that. Besides, which would you prefer: an editor calling out a character doing something unbelievable and stupid or receive an (appropriately) angry email from a reader who surrendered their hard-earned money and time expecting the characters to not do unbelievable and stupid things? To me that is not a difficult decision. Thank your editor. Praise your editor. They’re the only ones who care as much as you do.

It’s a road story about unsung blue-collar specialists who go around handling, let’s say, individuals of the undead persuasion before it can get out of hand. Take the crew of Alien, smoking cigarettes and bantering about bonuses, then have they get in a beat-up motor home and go kill zombies.

Thank you to Andrew for taking the time to speak to us about character influences, writing advice and for telling us a little about Chop Shop. You can pick up this new FLAME TREE PRESS edition of his book, along with the other June releases now. It will be available in paperback, hardback and ebook. Check out our website for details.
Andrew Post was born in Erie, Pennsylvania (imagine Eraserhead but in color). While he was honing his craft as a writer (those early stories were awful) he worked in a gift shop in one of the scuzziest hotels in the Midwest, he cleaned rental cars (also gross), he was a butcher (despite being a vegetarian), and in 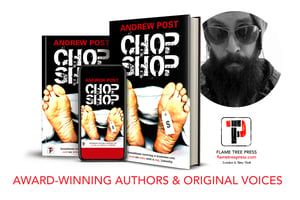 2013 his first novel, the cyberpunk thriller, Knuckleduster, was published. No one really seemed to care much but he kept at it and has since published a handful of other works to varying degrees of resulting public interest with a few seeing translations and one almost became a movie (that lit agent has since been fired).
For Chop Shop, Andrew was inspired by the (early) films of Quentin Tarantino, Guy Ritchie, and Martin Scorsese, as well as the deliberately over-the-top horror films of the 80s like Peter Jackson's Braindead. That was the goal with Chop Shop: a comedic crime caper with buckets of gore.
Andrew lives in a sleepy river town in Minnesota where he may or may not be planning aquatic "accidents" to befall the many other authors who live in the area and he has been mistaken for Rob Zombie on no less than ten separate occasions.
Make sure you check back in with the blog all week for more Q&As with the authors of our June releases!