To celebrate the launch of our May releases we are posting Q&As with all four authors. Today we are talking to Hunter Shea about his book Ghost Mine (which some of you may remember as Hellhole) his inspirations and what it's like to work with Don D'Auria. Make sure you check in for the other Q&As we will be posting on the blog this week!

I like to think of it as a paranormal adventure novel with two very tough guys who have this incredible history that could only have been achieved if you had survived to the turn of the 20th century. Nat and Teta worked cattle trails, rode with Teddy Roosevelt as Rough Riders and now have settled in to a ho-hum life as New York City cops. When President Roosevelt asks them to travel to an abandoned mining town in Wyoming to find both gold and lost soldiers, they jump at the chance because adventure is their lifeblood. Nothing is quite as it seems in Hecla, and the way they view the world is about to be turned on its head. There’s mystery, terror, action, romance and a little bit of humor. If Ghost Mine were a dish, I’d used the entire spice rack to make it.

It’s very much about the bond between friends (Nat and Teta), loss and the accompanying grief, and the last vestiges of the great American spirit that helped grow a nation.

I love crime novels, especially the Spencer series by Robert Parker, Robert Crais’ Elvis Cole books and on and on. We need more tough guys, which seems to be a dying art. Nat and Teta would be bad ass private investigators if they were alive today. But, back in their time, they’re former cowboys, soldiers and cops looking for that next buzz that comes with taking on the strange and impossible. Selma is a thinly veiled Salma Hayek. I know I’m not alone in mooning over her. It made getting Nat to fall for her quite easy.

The entire time I wrote Ghost Mine, I had my father in mind and his love of both westerns and horror. Thanks to his influence, I was pretty well versed in both genres, so the writing just flowed. I did spend a lot of time doing research on the Rough Riders, New York in early 1900, Teddy Roosevelt and Hecla, Wyoming, which is an actual abandoned mining town. I would tell my father things I was putting into the book and he would get a kick out of it. That’s how I knew I was going down the right path.

Two words are all you need to start. Both of these magic words were given to me by Elmore Leonard almost twenty years ago. Read. Write. Do no even attempt the latter until you become voracious with the former. The third word I like to add is Repeat.

When I wrote Ghost Mine, I actually did most of it at my writing desk at home. So often, I tend to find odd places to scribble (like my kitchen or the back seat of my car). I had so much material that I needed to reference in terms of the history, pictures of the terrain, maps, etc, that I had to be in my little writer’s cave if I wanted to get it right.

I tend to mix it up. The past few years, I write a lot in silence. I think it’s simply because once I decide to dive in, I just get started and forget to slip on my headphones and find something to listen to. However, on days when my energy is flagging or I need a little extra something, I will listen to a soundtrack that has a frenetic beat to get the blood flowing.

That first draft is an uphill battle. It’s far easier to edit. I know I’ve already gotten the bones of the story down. Hell, I even typed THE END on the final page. Now I just need to go in and make it meaner and leaner. Editing is fun. So is writing, but at least with editing, you’ve already seen the light at the end of the tunnel. You just need to make it a little brighter.

I’m so fortunate that I get to be edited by Don D’Auria. He was the only editor I wanted to work with when I started writing, so the fact that we’ve been working together for years now is pretty amazing. He’s forgotten more about writing and the genre than I’ll ever know, so I defer to his advice. I realize not everyone gets so lucky and I appreciate the hell out of it.

I’m actually trying my hand at ghost writing, penning a novel for a very successful author. Naturally, I can’t reveal any more information. If I did, I’d have to kill you. Then we’d both be ghosts.

Hunter Shea is the product of a misspent childhood watching scary movies, reading forbidden books and wishing Bigfoot would walk past his house. He doesn't just write about the paranormal  he actively seeks out the things that scare the hell out of people and experiences them for himself. Hes the author of over 25 books, including The Jersey Devil (Pinnacle) and We Are Always Watching(Sinister Grin). Hunter's novels can even be found on display at the International Cryptozoology Museum. 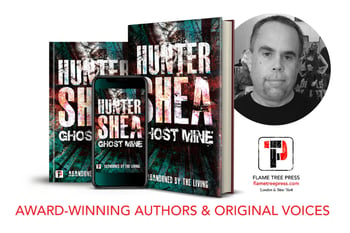 The Montauk Monster was named one of the best reads of the summer by Publishers Weekly. He was selected to be part of the launch of Samhain Publishing's new horror line in 2011 alongside legendary author Ramsey Campbell. He's an avid podcaster and can be heard and seen on Monster Men and Final Guys every week. Living with his crazy and supportive family and two cats, he's happy to be close enough to New York City to see the skyline without having to pay New York rent.
You can follow his travails at www.huntershea.com
Make sure you check back in with the blog all week for more Q&As with the authors of our May releases!