But my cartoons started taking the form of long narratives, rather than short gags. During my early teenage years, I would create epic-length cartoon stories on notebook paper and put them in three-ring binders. One was 1,000 pages long, a meandering comedy-action story featuring me and my friends facing off against a super villain. It was called “The Brats.”

I like building tension and suspense. It’s just fun to send readers on a rollercoaster ride. Sometimes it’s psychological, sometimes it’s more action-driven. Sometimes I include humor, which naturally arises out of tense situations. It’s like a relief valve.

My first goal is to engage the reader emotionally, to take a sympathetic character and thrust them into a crisis that might include their first encounter with crime or violence. My lead characters are regular people: teachers, office employees, working mothers, construction workers, book store clerks…

How did you choose your main character for your new book, The Gemini Experiment?

As I get older, I start to dwell more on mortality – the ticking clock that unites every single being on this planet. We’re not going to live forever.

Tom Nolan, the main character in The Gemini Experiment has had his life expectancy cut short by a terminal illness. He’s a young family man suddenly facing the end. He is recruited for an experiment to explore the potential for expanding lifespan through technology – the ability to digitize a human brain and upload it into a robotic reproduction of his physical self. He soon discovers he’s a pawn in a much bigger scheme that threatens the world.

I don’t want to give too much away, but it builds to the ultimate case of identity theft.

My goal is momentum. I want the writing to be crisp, clear and easy to follow so your eyes glide down the page. And I want the reader to be constantly engaged by a feeling of “What happens next?” I love ending chapters with cliff hangers. I love cross-cutting between two plot threads of suspense. I want to create situations where you wonder, “How will they escape?” “How will they survive?” “How can this bad guy be stopped?”

I think that in some of my earlier books, I spent too much time on table setting – establishing characterizations, circumstances, location, backstory – before really thrusting the plot into motion. I’ve learned more about how to sprinkle those things into the narrative along the way to keep the story moving. I don’t want to bore the reader. I don’t want to bore myself!

A lot of your books are set in Chicago. What do you find so compelling about the location?

Well, I’ve lived in the Chicago area for most of my life, so write what you know…

Chicago is my home. I love it, most of the time. I can plunge more quickly into the storytelling because I know the environment inside and out. The sets are already built.

Chicago has so many textures to choose from. It’s a city with great heart and soul. It’s hot, it’s cold. It’s rich, it’s poor. It’s friendly, it’s dangerous. There’s a great palette of colors to work from. Los Angeles is for dreamers, New York is for cynics, Chicago is somewhere in-between. It’s pragmatic and down to earth… a big city but still very personable.

That said, many of my books move around quite a bit. They might start or end in Chicago, but they jump around the United States or the world. The Gemini Experiment starts in Chicago, but bounces around to Florida, Washington DC, Russia…

Brian Pinkerton tells stories to frighten, amuse and intrigue. He is the author of novels and short stories in the thriller, horror, science fiction and mystery genres. His books include Abducted (a USA Today bestseller), Vengeance, Anatomy of Evil, Killer's Diary, Rough Cut, Bender, Killing the Boss and How I Started the Apocalypse (a trilogy). Select titles have also been released as audio books and in foreign languages. His short stories have appeared in PULP!, Chicago Blues, Zombie Zoology and The Horror Zine. 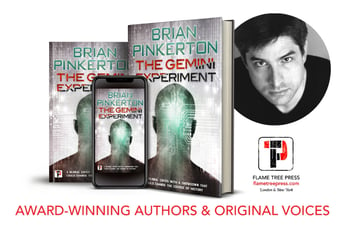 Brian has been a guest author and panelist at the San Diego Comic Con, American Library Association annual conference, World Horror Convention and many other literary and genre events. His screenplays have finished in the top 100 of Project Greenlight and top two percent of the Nicholl Fellowship of the Academy of Motion Picture Arts and Sciences. Three of the scripts have been compiled in a collection, Unreleased.
Brian received his B.A. from the University of Iowa, where he took undergraduate classes of the Iowa Writers Workshop. He received his Master's Degree from Northwestern University's Medill School of Journalism.
Brian lives in the Chicago area and invites you to visit him on Facebook, Goodreads, Twitter and at www.brianpinkerton.com. Brian is also a cartoonist and his web site includes his deranged cartoon series, The Ruts.
Make sure you check back in with the blog all week for more Q&As with the authors of our May releases!