Continuing with the Q&As with the authors of our June releases, today we are talking to Jonathan Janz. He talked about his inspirations for writing, what his favourite Gothic books are and what it takes to make it as a successful writer!

It’s about a man trying to get back what he lost, both from himself (since he treated his father badly) and from the world (his wife cheated on him, and he’s lost his self-respect).

In addition to the above thoughts, the book is about healing and being there for people when they really need you to be. Above all it’s about trying to cling to one’s morality when everyone around you is behaving selfishly and cruelly.

Just an image: a bunch of cowboys in a valley roasting an old man on a spit. That image spawned the novel. Also, the vampires were inspired by FRIGHT NIGHT (the original) and NEAR DARK (especially the Bill Paxton character).

I absolutely love the Old West. That lawless setting served as a beautiful backdrop for this tale. People love westerns because they truly lay bare the human psyche, both its nobility and its depravity.

What are some of your favorite vampire books?

The western aspects were inspired by Elmore Leonard, Cormac McCarthy, Larry McMurtry, and Joe R. Lansdale. The horror came from my imagination and the aforementioned vampire novels.

Thank you to Jonathan for taking the time to speak to us about his writing practices, his inspirations and telling us a little about Dust Devil's. You can pick up this new FLAME TREE PRESS edition of his book, along with the other June releases now. It will be available in paperback, hardback and ebook. Check out our website for details. 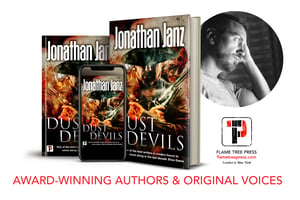 
Make sure you check back in with the blog all week for more Q&As with the authors of our June releases!