Continuing with the Q&As with the authors of our May releases, today we are talking to Jonathan Janz. He talked about his inspirations for writing, what his favourite Gothic books are and what it takes to make it as a successful writer!

What are some of your favorite books haunted house/Gothic books?

Early Peter Straub played a big role in my writerly path, particularly GHOST STORY and JULIA. GHOST STORY is one of my favorite novels ever. In that story and in JULIA, you get the notion of an ageless being whose desire to live on devours everyone in her path.

Stephen King’s ‘SALEM’S LOT has a strong Gothic flavor. The Marsten House remains one of my favorite settings in all of literature. I think ‘SALEM’S LOT is as much about a haunted town is it is about vampires.

Richard Matheson’s HELL HOUSE, and Shirley Jackson’s THE HAUNTING OF HILL HOUSE are essential works. They were the first two non-Stephen King books I read, but ironically (or predictably, if you know anything about me and my development as a writer), both were recommended by Stephen King in DANSE MACABRE. The Belasco House (in HELL HOUSE) is like the mother of all haunted houses. I think it’s even referred to as the Mount Everest of haunted houses in the novel. And Hill House is another unforgettable setting. I loved Jackson’s book, and I really enjoyed Mike Flanagan’s take on the house in his Netflix miniseries.

It’s about the tendency of men to succumb to evil, the enduring power of evil, and how a place can absorb that malevolence, a la the Overlook Hotel. It’s also about Annabel, this insatiable creature who refuses to die, who refuses to change. Men think they’re going to possess her and end up being completely dominate by her. I sort of like that. There’s this twisted proprietary attitude in men toward women, and this novel examines that and shows where that can lead. With a supernatural twist, obviously.

Did anything specific inspire you to write this book?

I’ve long been fascinated both by graveyards (I grew up next to one) and by the idea of automatic writing. Those two ideas merge in this story. Back when I was twenty-six, I had the idea for this story, so I journeyed to a rural graveyard and wrote the first version of the novel there. Looking back, it was a little disrespectful. I’d sit there in my lawn chair with my water bottle in hand and my shades on, and it was really sort of silly. I mean, I get why someone would write on location, but at that time, what I needed wasn’t the proper place, but rather the proper skills. I didn’t have skills at that time, so it was sort of like playing dress-up and pretending I was a writer. I rewrote HOUSE OF SKIN eight times over the years and edited each version tirelessly. The one available now is the final version and easily the best version.

Yes. I lived next to a graveyard and have always been fascinated by them. In fact, I wrote the first draft of this book in a graveyard, which is fitting. Basically, the main character is transfixed by a specific grave, and I, too, have been mesmerized by gravestones with a lot of character.

When I was a senior in college, I knew I wanted to be a writer, and I also knew that many of my story ideas connected to graveyards. So I set about calling the graveyards around West Lafayette and Lafayette (Indiana) to see if I could find employment at one of them. One place did call me back, so that became one of my two summer jobs that year (the other being a server at a restaurant—yes, I washed my hands in between jobs). At the graveyard, I mostly mowed and weed-whipped, but there were times I got to do more interesting things, like helping to dig the graves. That firsthand experience helped this book and several others (like THE DARKEST LULLABY).

Where did you write House of Skin?

Like most of my novels, the final draft of this one was written in my home, in my writing room. It’s an inspiring setting filled with books and an aura of magic.

The loneliness, the eeriness, the sense of age and history and secret lives. Graveyards have always fascinated me because they’re tinged with every emotion people feel about death and even life. But as alluded to above, they’re also full of mystery. We don’t know what happens when we die. We all have beliefs about it, but we haven’t crossed that particular threshold. A cemetery is the embodiment of that mystery. Therefore, we’re drawn to cemeteries and repulsed by them.

If I had to choose someone who influenced this book, it would be Peter Straub. GHOST STORY really affected me when I read it back in college. I’ve never been the same. And I believe its shadow still shows in much of my writing. If I had to choose who influenced me most as a writer, well, Stephen King would be the easy choice. He’s the reason I’m a writer, a reader, and a teacher.

I’m starting a new top-secret project next week. I can’t wait to get started!

Thank you to Jonathan for taking the time to speak to us about his writing practices, his inspirations and telling us a little about The House of Skin. You can pick up this new FLAME TREE PRESS edition of his book, along with the other May releases now. It will be available in paperback, hardback and ebook. Check out our website for details. 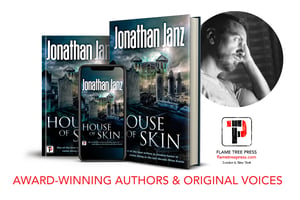 
Make sure you check back in with the blog all week for more Q&As with the authors of our May releases!