After finishing his studies at the drawing school, Blake became an apprentice to James Basire, an English engraver. After 7 years Blake became a professional engraver and it is with this trade that he would earn a living throughout most of his life. Beginning with almost exclusively re-productions and copies of other’s works, works which he had studied from a young age, it wasn’t until later in his life that Blake would make a name for himself from his own designs. FRom Basire, Blake learnt a type of line engraving that was relatively outmoded at the time but his artistry shone trough. Rather like much of his work, the skill and artistry in his engravings is now recognised as some of the greatest line engraving of the time.

Blake's engravings ranged in their subject matter. Some of his most famous ones depict biblical scenes with the most popular ones during his lifetime being his engravings of The Book of Job. He also did engravings for a version of John Milton's Paradise Lost and was in the midst of finishing engravings for Dante's Inferno. 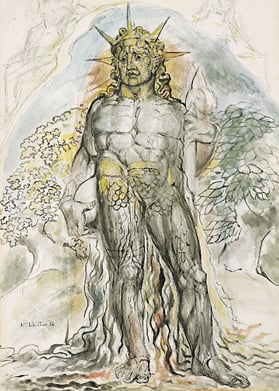 While Poetry was not the art form that Blake placed most emphasis on in his life, it has become on of the things he is most known for. Some of his most famous work is poetry and this includes the words to “Jerusalem”. Taken from his preface to Milton: A Poem in Two Books, the words from “And Did Those feet in Ancient Time” were later paired with music by Sir Hubert parry to form what is considered an alternate national anthem in Britain.

Blake's poetry touched on many subjects over his years of writing. He discussed love, politics, class, oppression and much more. He wrote about walking through London and all the injustice he saw on the streets of the capital and even wrote a piece from the perspective of a black child born in to slavery which was part of a wider indictment he made against slavery. His poetry is still valuable today and not just for its historical importance but because its contents is often still relative.

Many of Blake’s greatest works were done in watercolour. Watercolours of the era were not quite so refined as they are today and because of this he used a combination of washes and pen. He would draw the image in a hard line of graphite or ink and then uses washes of watercolours to add colour and definition. His art has in turn inspired other works ranging from film and music to other painters.

English landscape painters like Paul Nash and Dora Carrington saw Blake’s work as very influential to their own work but also comic book artists like Alan Moore. The use of solid lines and then washes of colour can clearly be seen in Moore’s work like the Watchmen comics.

Although not widely recognised in his own lifetime, Blake is now considered an exemplary of the title of a Renaissance Man. A multi-faceted artist and writer Blake’s work is now regarded for it’s technique and his own artistic ability and remains still visibly modern today.

This post is based off extracts from our book Masterpieces of Art: William Blake (ISBN:9781786648129). This title is part of our Masterpieces of Art series which is packed, with tonnes of information and beautiful images. You can order it from our website here or on Amazon here.