The expressive qualities of paint’s colours and textures were an essential feature of the movement that became known as Abstract Expressionism, which developed in the United States during the 1940s. The Abstract Expressionists were a loose grouping of painters in New York, working in varying styles but sharing a desire for a freedom from traditional artistic values. 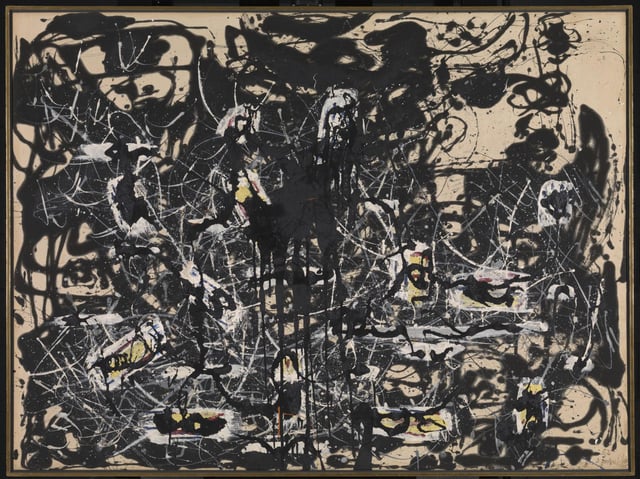 The Beginnings of a New Style

Art in the United States had begun to evolve in the 1930s and 40s, rising to prominence over the art emerging from the old centre of Paris, as European imperial dominance began to wane and with it its cultural dominance over the old art of the West. In addition, a new community of artists and intellectuals had begun to arrive from Europe, fleeing political upheaval and persecution, and including some of the major exponents of the Purist-Abstract and Surrealist art movements. American artists were receptive to both styles, so that the previously mutually distinct movements were assimilated into a third, new style.

One of the dominant tendencies in 1930s American painting had been a realistic and often documentary style, depicting rural and small-town life, epitomized by the work of the Iowa-based Grant Wood (1892–1942). The Abstract Expressionists reacted against what they saw as the conservatism and dryness of this kind of painting, preferring spontaneous and personal expression. Cubism and Surrealism were important sources for the development of this new movement.

The Armenian painter Arshile Gorky (1905–48) was a close friend of Roberto Matta (1911–2002), and developed in his own work strong personal imagery using brightly coloured biomorphic forms.

Originally named Vosdanig Manoog Adoian, Gorky was born at Khorkom Vari in Turkish Armenia. He survived the genocide perpetrated on the Armenians by the Turks during World War I and escaped to the West, settling in the USA in 1920. The death of his mother during one of the Turkish atrocities had a profound influence on his art. It was at this time that he adopted his new name, taking the surname from the celebrated Russian writer Maxim Gorky (1868–1936). In America he trained at the Rhode Island School of Design and continued his studies in Boston. For several years his style was a heady but eclectic mixture of elements drawn from Joan Miró (1893–1983), Paul Cézanne (1839–1906), Pablo Picasso (1881–1973) and André Breton (1896–1966), and it was from the latter that he was attracted to Surrealism, concentrating on biomorphism (the creation of organic abstracts), but later developing his own distinctive style, which promoted Abstract Expressionism.

In paintings such as One Year the Milkweed (1944), Gorky created a bursting mass of daubed shapes overlaid with blurring, dripping colours full of emotional and irrational intensity. He wrote about his paintings as transcriptions of childhood recollections, as well as explorations of joy, anxiety and pain. Gorky was a significant link between the European art movements and the new generation of American painters.

The artist Hans Hofmann (1880–1966) also had a considerable influence on the new generation of American painters. Hofmann, born in Germany, had worked in Paris and Munich before moving to New York in 1932, where he taught some of the artists that would rise to prominence in the following decade.

Hofmann’s paintings of still-lifes and landscapes bore the marks of Cubism, but he also began to experiment with bold brushwork, strong colours and, most importantly, with techniques of dripping and dribbling paint on to the canvas. 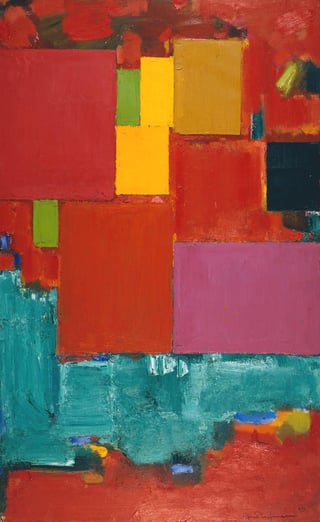 Jackson Pollock (1912–56) developed an abstract style based initially on mythic imagery inspired by the work of Picasso, André Masson (1896–1987) and Miró, and evoking sexual and violent themes expressed in a spontaneous way, similar to Surrealist ‘automatism’.

Pollock had undergone psychoanalysis based on the teachings of the Swiss psychologist Carl Gustav Jung (1875–1961), which revolved around a series of collective, subconscious archetypes, such as the opposition of male and female qualities. Powerful, universal forces were suggested in the large-scale paintings that Pollock began to produce from 1946. He placed his canvasses horizontally on the floor and poured paint on to them in splashes and dribbles from all directions. Works like Full Fathom Five (1947) present a rhythmic mass of dripped paint, supplemented with small found objects such as cigarettes, nails and buttons, without any recognizable subject matter. Great arcs and curving forms reflect Pollock’s vigorous gestures in creating the work, moving freely around the canvas using dried-out brushes, sticks and trowels to apply his paint from a distance. This process was known as ‘action painting’. Pollock’s work had great significance within the development of modern painting through its insistent treatment of the canvas as a flat – in this case horizontal – surface, and through its emphasis on the painter’s own processes of creation.

Gestural energy and an emotive ‘unfinished’ appearance were important features of the painting of other artists associated with Abstract Expressionism, such as Lee Krasner (1908–84), Pollock’s wife. Krasner took classes from Hans Hofmann in her early years, often creating charcoal drawings or oil paintings of nude models or the human form and later her style would oscillate between open form and hard-edge shape, with palettes ranging from monochrome to assortments of bright colours, but never settling on a singular style. She was very critical of her own work, often revising or destroying pieces she had worked on, so the body of her work that survives is small.

The Dutch-born Willem de Kooning (1904–97) was also strongly associated with Abstract Expressionism. De Kooning’s work maintained a tension between abstraction and figuration, using the female nude in particular as the basis for compositions in violent reds and pinks. 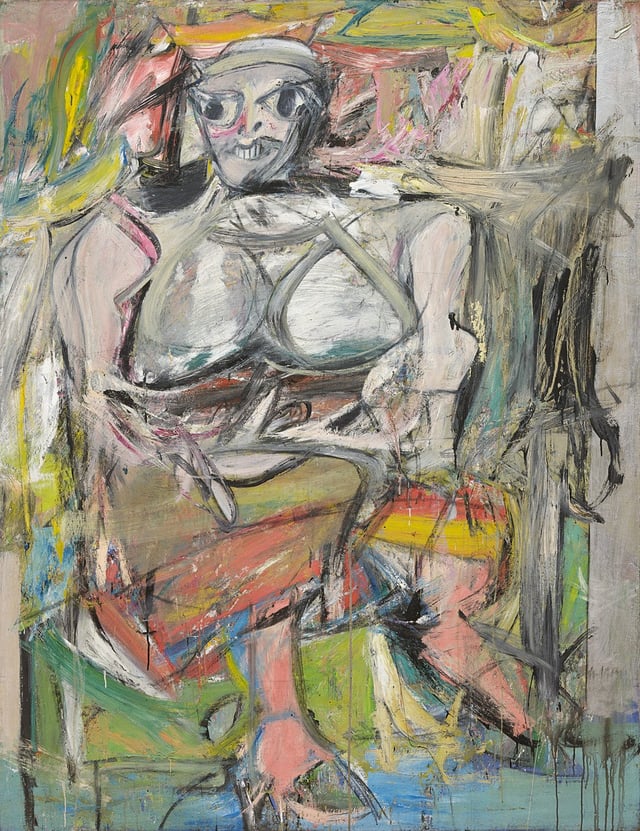 De Kooning was less interested in the processes of ‘automatic’ creation than he was in the relationship between the flat picture surface and the illusion of volume of the human figure, between the drawn line and the fleshy presence of colour. These concepts he had derived from Cubism, and from the work of Picasso in particular, whose grotesque deformations of women’s bodies were a forceful inspiration upon De Kooning’s Woman series of the early 1950s. The exuberance of this strain of Abstract Expressionism had a formative influence on the work of the ‘Cobra’ group of young painters in Europe, which included the Dutchman Karel Appel (1921–2006), with his stridently coloured, child-like animal and figure scenes, and the Dane Asger Jorn (1914–73), whose paintings are full of furious brushstrokes and disorderly forms in primary colours. The American Cy Twombly (1928–2011) was also inspired by the spontaneity of Abstract Expressionism as well as by the child-like vision of Paul Klee (1879–1940), creating complex scribbled works midway between painting and drawing.

If you’ve enjoyed reading about Abstract Expressionism and you want to learn more about modern art, you should take a look at our book Origins of Modern Art, an in-depth look at the many forms of modernism. Alternatively, The World’s Great Masterpieces of Art will give you an overview of the most popular art from the twelfth century right through to the Pop Art movement of the twentieth century.